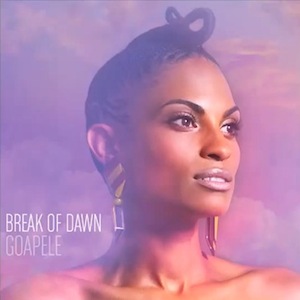 If you live in the Bay Area, you’ve no doubt caught Oakland native Goapele at one or two (hundred) local festivals; the R&B songstress is known for staying true to her roots with soulful live performances and laid-back vibes. So when news spread that Goapele was back in an Oakland studio recording her fourth studio album after a six-year recording hiatus, local and national fans alike were pumped. Would Break of Dawn deliver through the span of profound life transitions, like the birth of her daughter and the ever-changing music scene? Would it stand up to the initial success of 2001’s Closer/Even Closer, now a decade old? Would this seasoned performer translate those live Bay vibes into a record?

This listener’s answer is a resounding… I think so?

Lemme break it down: track one’s “Play” is hellllllla good. Produced by Dan Electric & Teddy Thunderbolt, the beat is sick and fits Goapele’s lilting vocals perfectly. Similarly, singles “Milk and Honey” and “Right Here” capture what I think Goapele does best: sing, effortlessly. Not the too-many-notes style of most of her neo-soul peers, but the rare, smooth, pure sound (often compared to Sade), best paired with beats she can just, you know, ride.

Where Break of Dawn isn’t quite doing it for me is its versatility – or lack thereof. Though the production plays all over the map, Goapele’s voice feels a little monochromatic, like we’re getting the same emotional approach for each song. It’s not a style that leaps out of the speakers to begin with, so varied energy is especially important… and something Goapele’s live shows truly capture that Break of Dawn doesn’t quite…

My vote? Longtime fans will love it and newbies will dig the epic production team (Bedrock, Malay, Drumma Boy, and more). I’d buy it to support Bay artists and marvel at that sweet soul spot she does hit so well— and, of course, so I can sing along when I catch her live.

Check out the video for Goapele‘s “Play”: