“Beware the Ephemeral” by Sea Dramas 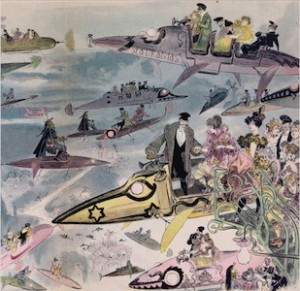 On their second LP, Beware the Ephemeral, San Francisco’s Sea Dramas deliver dreamy Left Coast psychedelia that’d be a fine soundtrack for cruising the Pacific Coast Highway. Vocalist/Songwriter Scott Petterson duets with Erin Skidmore effectively on the album opener, “Untwined.” Skidmore pretty much sings co-lead on many of the cuts, though she tends to be buried a bit behind Petterson, making them just shy of being actual duets. Their vocals float atop Byrds-y arpeggiated guitars and basslines that sound like they’ve been plucked from the ‘60s, especially on the ethereal “Ending Game.”

“Wait for Sunrise” ups the energy, with faster, surfy drumming, a tempo that would be brought back a few tracks later with “Lion Jaw.” They end the album on another high note with “Bad Desire,” throwing in so many melodies, that it’d feel at home in Brian Wilson’s head (via frandy). Sea Dramas reach for the stars above the surf, and on Beware the Ephemeral, they manage to grab ahold of it.