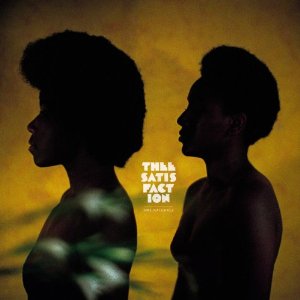 Justin Timberlake may have brought sexy back in 2006, but Seattle-based THEESatisfaction’s new album, awE naturalE, spins the hip-bumping lady power grooves to bring that sexy back to your place. Hitting stores yesterday, thirteen tracks combine the unabashed sexuality of Salt-N-Pepa’s “Let’s Talk About Sex” with the poetic wisdom of Erykah Badu’s “On and On.”

With mellow, smooth vocals vibrating lyrics of black female empowerment, sensuality, and soul, you could listen to this album while doing your taxes and still get turned on. Duo Stasia Irons and Catherine Harris-White marry African drum beats to jazz piano, Def Jam Poetry Slam to the funk of ’70s R & B, all with a modern lacing of electronic beats, for an album that pushes buttons and boundaries from beginning to THEESatisfying end.

The one tease? Save for their album release show in Seattle on March 29th, THEESatisfaction is skipping a US tour and heading to Europe. Guess we’ll just have to turn the stereo up for the good vibes ’til Sasquatch Fest in May.