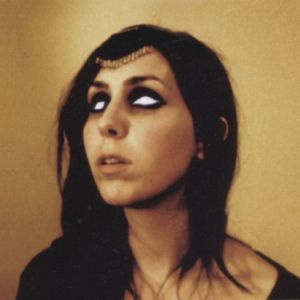 If you’re curious about Chelsea Wolfe‘s second album Ἀποκάλυψις (Apokalypsis), all you have to do is look at the album’s cover art and that split-second glimpse will momentarily set the tone for the next thirty seven minutes and twenty nine seconds of your life. The sepia portrait of Wolfe with her digitally enhanced white eyes is both creepy and vulnerable, which succinctly describes the way Ἀποκάλυψις will make you feel upon first listen.

Slower tempo songs do not necessarily beget an increased dramatic quality, but here there is a theatrical element common throughout which can be attributed to drawn-out gnarled guitar chords and Wolfe’s dark and slightly muffled languid tones. “Demons” is the most uptempo track on the album yet Wolfe still manages to reach into the depths of misery and seemingly summon evil spirits out of the woodwork. Ἀποκάλυψις is the type of album that needs to be listened to from start to finish in one sitting. From “Primal/Carnal” to “To The Forest, Towards The Sea,” Wolfe ultimately uses her craft and elevated artistry to play the role of the cinematic storyteller. Though there aren’t enough derivatives of the word “dark” to describe this piece of work, Wolfe also manages to convey a sense of vulnerability and beauty against a bleak backdrop. Like the lyrics in Frou Frou‘s “Let Go,” there is something beautiful in what at times feels like a mental breakdown or purging of the darkness in Wolfe’s heart.