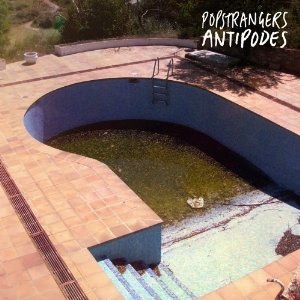 Popstrangers are aptly named — 3 strange guys from New Zealand most of us have never heard of. Joel Flyger, Adam Page, and David Larson are making pop music that has all the hallmarks of indie/alternative rock/whatever the label of music you want to slap on music that likes to experiment. We hear some Nirvana, some Pixies, a dash of Radiohead, and then there’s the crazy mix of Joel’s softy crooning lyrics amongst the cacophony unleashed by the drums and bass that is all their own.

Antipodes is a very clever debut that they recorded in studio in the basement of a 1930’s dance hall. How cool is that alone? But atmosphere aside, the album is a solid unit showcasing their skill in variety; sweet pop in “Heaven” and guitar riffs aplenty in “Jane.” We especially loved the hard rock of “What Else Could They Do?,” air drumming for all we were worth. Joel has a vision for future music, stating: “[I] try to avoid sounding like any of the bands or sounds that influence us. I think our sound is still progressing…[and] it’s important to keep messing around and trying new ideas.” Excellent thoughts and we look forward to what else they can do.