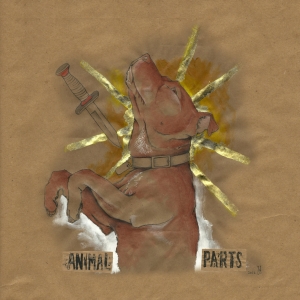 When the Toronto-via-Calgary folk prodigy Joshua Cockerill made his debut in 2009, the press response was well-spirited in a somewhat dismayingly reserved way. The judgment thrown the most was that Cockerill’s music showed great potential, and that his self-penned record, The Trick With Your Heart I’m Learning to Do, was a “highly promising beginning.” Skip to 2012, a full backing band, and a new moniker. You can say a lot about Animal Parts, but not that it “sounds good for a first attempt” — this time around, Cockerill and Co. seem like they’ve been in the record-releasing game for decades.

Which is how long their influences have been around, too. The band admits to some patriotic Neil Young and Leonard Cohen love, and you can clearly see echoes of the former (in the drive and groove of their rock-fueled Americana), and the latter (in Cockerill’s beautifully poetic lyrics, such as this line: “If I never got the blues / Would I find the cracks in life / Where the beauty shines through?” What’s more, Animal Parts remind us of big-time acts that skillfully served those influences to the bookish indie-rock crowd in the nineties and the zeros, namely Wilco and Bright Eyes, for which they deserve a piece of the alt-country cake. Sweeping, carefully-written, and professionally sounding, Animal Parts is a work of a confident, focused ensemble.