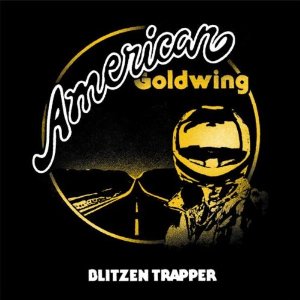 American Goldwing is a glowing love letter written to classic rock, blues, and folk complete with motorcycle and open road artwork. The iconic influence of Americana music at its best (or worst, if you aren’t a lover of the Dead, Dylan, or the harmonica) shines brightly and true for all 11 tracks. Eric Earley, band leader, describes it perfectly, “[music] that makes you want to get loaded and get in a fight or find a girl and fall in love forever, simultaneously.”

Each song has a distinct flavor all of its own to be savored, yet also brings reminders of those who careened along that great highway of music long before we toddled along. For example, “Stranger in a Strange Land” is a song about exploration and choices, with Eric’s clever lyrics melding quietly with the harmonica and guitars recalling Bob Dylan and campfires. The manic electric guitar on “Street Fighting Sun” could have come from any Neil Young, Lynyrd Skynyrd or Led Zeppelin (yes, yes British, but come on! Classic rock gods, period.) album.

Long time Blitzen Trapper fans will notice a bit of a slick sheen on this third release from Sub Pop due to the track mixing of Tchad Blake (The Black Keys, Elvis Costello, and Tom Waits among others) and co-production of Gregg Williams in an unprecedented move from the band to have a non member involved in the production process. It enhances the innate talent, that gift of storytelling set to melody, to help us be transported to a different mindset and time. We listen, we think, we sing along, play air guitar like no one is watching, and take the curves in our road faster than ever before because we can. Blitzen Trapper is taking us for a helluva ride on this album, and I, for one, am climbing on and not looking back.