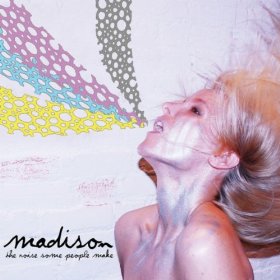 Leaving a bright future behind to follow her dreams is emerging New York pop-artistÂ Madison. The former published neuroscience and medical school student (!!!) has already generated hype with her songs being featured on ABC’s Ugly Betty & 90210.Â The Noise Some People Make (G Records) is the first installment of a 4-part EP series, which is just the beginning of what I predict will be a fo-shizzling 2011 for this young pop-hottie.

The 4-song EP glitters of 80s female synth-pop dance beats with the ambitious and well-produced “Low Lights” being the stand-out track. While this gem is screaming to be spun by the hottest DJs for sexy clubbing bodies to recoil to its beats, the fierce “Hot Hot Love” has a true dance-crew texture to it (yo, Lakers dance team, take note). Although the remaining two tracks lack the pizazz of the former, The Noise Some People Make is a great addition to any get-the-party-started playlist.