ALBUM REVIEW: “The January EP” by Here We Go Magic 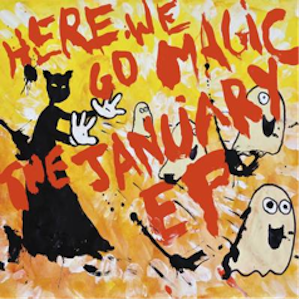 With the power to transport you to another dimension via a six-song EP, Here We Go Magic is a band that truly lives up to its name. The January EP is the companion release to their critically celebrated sophomore effort, Pigeons LP. Both albums are a result of a song-writing endeavor that began at a farm house in upstate New York. While Pigeons contains some tracks I love and some I could have done without, The January’s spaced-out cosmic jams fit together to create an exciting (albeit short) album that left me craving more.

“Tulip” is an attention grabbing opener which lures you in with sexy, face-melting guitars. Vocalist Luke Temple croons hauntingly about a “window to the soul” over swirling synthesizers on “Hands in the Sky,” a song that sounds a lot like New Zealand’s Ruby Suns. “Song in Three” exemplifies the band’s baroque-pop tendencies with its otherworldly layering of vocals and jangly guitars. “Hollywood” is a spooky transition into the faster-paced “Backwards Time.” Eerie dissonance is transformed into soothing harmony on the final track, “Mirror Me.”

The January EP will take you to outer space and back in just over 20 minutes. Sit back, relax and enjoy the ride.

Check out the songs HERE!