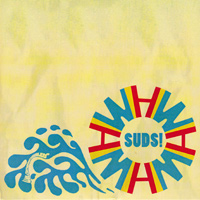 “The Untold Death of Grady Jones” is another tune with Brill Building written all over it. It’s got that wonderful ’50s New York girl group, bee hive hairdo flavor that defined early pop music and made all those teenagers swoon. If they don’t perform this song with some killer choreography, I would be disappointed. (Though they do have some work to do in some areas considering I almost hit â€˜next’ when the chorus rolled in, slowing down/confusing the momentum of the tune immediately.)

All in all, I can’t tell if they’re a really good bar band or part of rock’s great revival ambassadors? I’ll shelve any final judgments until their full-length follow-up, but for now Suds! is a welcomed portal into America’s fertile rock & roll beginnings.