ALBUM REVIEW: “Suck It and See” by Arctic Monkeys 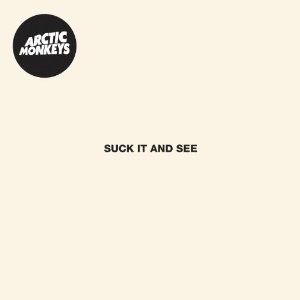 Whether it’s right or wrong, fair or unfair, people will always be waiting with bated breath for the Arctic Monkeys to release an album that embodies the same sonic qualities as their 2006 debut, Whatever People Say I Am, That’s What I’m Not. If you are one of those people, then I regret to inform you that Suck It and See, the fourth album from these UK marvels produced by James Ford, is not a time machine back to the year 2006. On the count of three, take your preconceived notions about the Arctic Monkeys, crumple them up into a little ball, and toss them into the recycle bin. Ready? One…two…three! Suck It and See is all about misdirection, illusion and smoke and mirrors, but it is also so much more than the sum of its parts.

The title of the album itself feeds into one’s expectations of what Suck It and See is all about. Factor into the mix the first two releases, “Brick by Brick” and “Don’t Sit Down ‘Cause I’ve Moved Your Chair,” and you’re left feeling a bit empty thinking that the album will shape up to be filled with higher end garage-y songs and cheeky but less-than-stellar songwriting. However, the band smartly uses our expectations and gut-reactions against us. Only when you venture deeper into the tracklist will your begin to reap the reward. Alex Turner’s songwriting takes a softer turn as he wordsmiths lyrics like, “Those twinkling vixens / with the shiny spiral eyes / their hypnosis goes unnoticed / when she’s walking by” (“Reckless Serenade”) and “If you’re going to try and walk on water / make sure you wear your comfortable shoes” (“Piledriver Waltz”). Not only does the songwriting feel less angled and frantic but songs like “Black Treacle” and “Hellcat Spangled Shalalala” feature more harmonizing vocals complete with ooooh-ing and aaaah-ing. Whether done deliberately or not, the title track aptly demonstrates how the album deceives an unsuspecting listener. Expecting to hear heavier growling guitars on a track with a seemingly vulgar title, “Suck It and See” is actually a song about being head over heels for a girl who is “rarer than a can of dandelion and burdock.” Knowing that our perverted minds will conjure up naughty images, the Arctic Monkeys take on human tendency, turn it upside down and juxtapose it against a beautifully crafted song.

Your curiosity will be peaked based on what you think you know about the Arctic Monkeys. But once you take the bait and Suck It and See digs its hooks into you, the band has you right where they want you. After you take a first listen, you will be happy to be there.