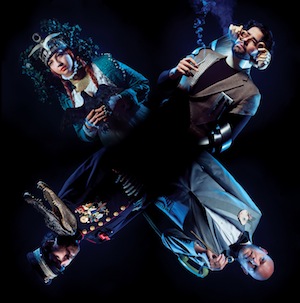 One would be hard pressed to find bands in Los Angeles that are willing to transplant themselves to the hills of Tennessee in order to focus on their music careers. Fortunately, Little Red Lung did just that in 2009, only to find their way back to California within recent years to release the self-titled EP Little Red Lung.

From the album cover of the self titled release (to the left), you might guess that the music is a bit…theatric. And, it is. Much like releases from Glasser, Austra, lead singer Zoe Ruth-Erwin sings with a range that is complimented beautifully by strings, horns, and a solid rhythm section.

Only 6 songs, Little Red Lung is the perfect commute album this week, coming in at 23 minutes even. With every listen one may feel as though they are a part of a play in which Little Red has crafted a soundtrack full of organic and living songs. It’s as if the band knows where to place every trumpet swell, each staccato violin note, and when to create a simplistic mayhem within the rhythm.

The band will be touring California in the upcoming weeks, but for the time being you can check out a few tracks below.