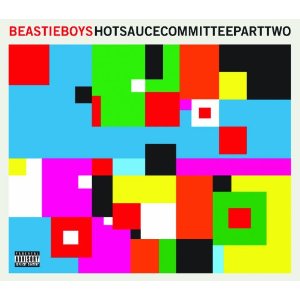 The Beastie Boys are back. Not back in the sense that they’ve released their latest instrumental album (to follow up the surprisingly ambient The Mix-Up) or that Country Mike has returned from the shadows, although Hot Sauce Committee Part Two was released in an unconventional manner. Less than two weeks ago, fans received the cryptic email: “This Sat, 10:35 a.m. EST â€“ Just listen, listen, listen, to the beat box,” before the album was streamed live via boombox in Madison Square Garden.

Other gimmicks include the promotional video to the album’s third single, “Make Some Noise.” Touted as “Fight for Your Right” revisited, the video includes two alt-versions of the Beastie Boys in Seth Rogen, Danny McBride, and Elijah Wood and Will Ferrell, John C. Reilly, and Jack Black. The song is a throwback to “Intergalactic’s” futuristic riff, with the Beasties rapping like their lives depend on a constant flow of rhyme.

The album flows seamlessly as a whole composition, something to be listened to from funky fade in to crescendo slamming end. “Tadlock’s Glasses” is a nod to the permanently delayed Hot Sauce Committee Part One‘s original title, mixing the gritty reverb and fuzzed vocals of a lo-fi mix-tape with typical panache. Despite these effects, even the most densely packed track is cleanly mastered and all Beastie Boys. The album’s first single, “Lee Majors Come Again,” is a punk rock race, while “Too Many Rappers” enlists the help of Nas to call out the contemporaries. Even the meandering instrumental “Multilateral Nuclear Disarmament” makes for good listening and not just while inebriated.

Although comparisons are being made to their groundbreaking albums, Paul’s Boutique and Ill Communication, the Boys’ latest is another turning point in their illustrious 30-plus-year career. With cutting, clean rhymes like the many meal references that pack more restaurant mentions in than a mall food court (they mention Taco Bell and Kenny Roger’s Roaster! Seriously.), and their swagger at an all time high, the Beastie Boys prove that this long marinating album has just the right seasonings. What an auditory feast it is.