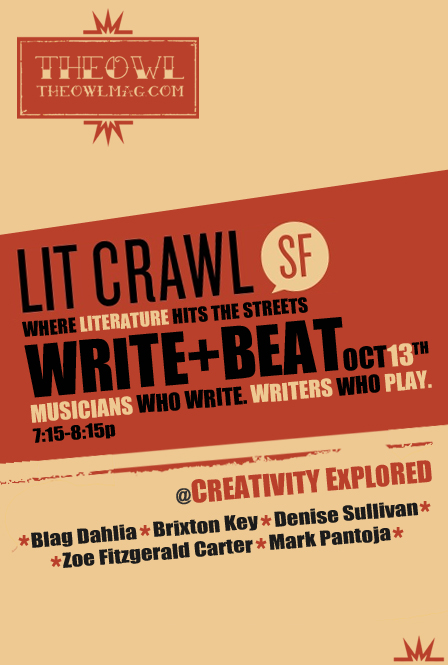 Not for the faint of heart (or tender of livers), Lit Crawl has been described as “the wildest, most wanton literary night of the year,” and we’re ready to shake and stir things up a little more with our own addition to the festivities, WRITE BEAT: Musicians Who Write, Writers Who Play. With over 85 stops to choose from on San Francisco’s annual celebration of literature and drinking (two things that have gone hand-in-hand for centuries, really), Lit Crawl features over 450 wordsmiths stepping up to face packed rooms of ever-so-slightly inebriated reading fans.

You’re invited to join us at the Creativity Explored gallery in the Mission this Saturday for an hour of raucous readings from five talented musicians/writers. And did we mention it’s FREE? Here’s the full line-up:

Hosted by Kat Engh of The Owl Mag.

Blag Dahlia from the Dwarves and Pullitzer prize-winning author.

Zoe FitzGerald Carter author LOS ANGELES (Reuters) – Pop star new justin bieber song and his girlfriend, Selena Gomez, a Disney actress and singer, have broken up, ending a relationship that made them one of Hollywood’s most high-profile young couples, media reports said. of Imperfect Endings and member of Who’s On Top?

Expect a rowdy crowd and witty reparté between the audience and the readers who dare to go before them. This event will begin promptly at 7:15pm, and end on time an hour later, and we expect a crowd, so show up early to get a good banter spot.

For more info on and the full Lit Crawl schedule, visit the official Lit Crawl site, and don’t forget to RSVP and invite your friends HERE.