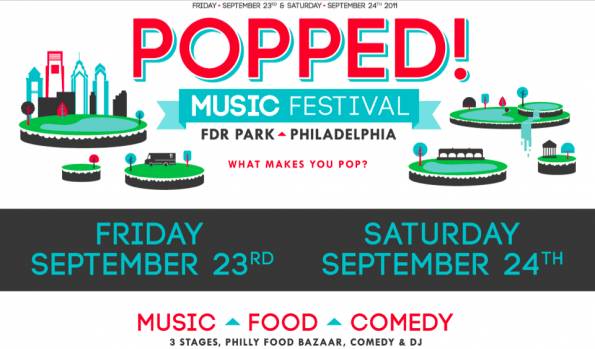 Festivals often come with straight forward titles. Location is a popular element (think Austin City Limits, Monterey Pop, Reading/Leeds, Newport Folk Festival), company/organization backed titles are common (Pitchfork, CMJ, [Van’s] Warped Tour). Lollapolooza was taken from the Three Stooges, Bonnaroo honors Dr. John, and Sasquatch? Well, if Bigfoot were to be anywhere, Washington state seems a likely place.With all that in mind, as Shakespeare pondered, is there really anything in a name? In the case of POPPED! Music Festival, held September 24th and 25th in Philadelphia, there just might be.

While unaware of the title’s true origins, “popped”  is one of the best ways to describe the line-up; a succinct list of acts that have broken through to continual success (such as Panda Bear, The Hold Steady, The Shins) along with artists that are, as we say, buzzed, hyped, and popping up all over the place (Foster the People, Cults, The Pains of Being Pure at Heart) and thus sparks little surprise as to why it has been moved to be held on a college campus. In short, while the festival may boast a few names that seem only vaguely familiar, in most cases Popped Festival has compiled a list of acts that are bursting out on the scene. If you’re headed on over to the Liacouras Center be sure to check out the following acts:

Yuck
If you haven’t heard of Yuck, surely you’ve heard the list of words often used to describe them: nostalgia, 1990s, post-post-post-post modern, etc. These titles, buzzy in their own right, do encapsulate much of Yuck’s sound. And while they may take some cues from Mascis, Thurston, and the adoration of reverb guitar, their youthful prowess is what makes this quartet a must-see.

The Joy Formidable
It wouldn’t be a trend if there weren’t a slew of case-studies, so rounding out the nostalgia buzz is UK band The Joy Formidable. Comparisons to The Breeders are not sparse and lead-singer Ritzy Bryan explodes against the band’s wall-of-sound set-up.

Charles Bradley
While most of these bands are looking back at history, Charles Bradley was busy living it. Born in the 1940s, Bradley speaks to the soul, funk, and absolute passion that has gotten him where he is today, a dream 40 years in the making.

The Shins
While most of the college-aged kids may attribute the name to a film called Garden State (which even now is probably way far out of the zeitgeist). Those who’ve followed The Shins’ career have seen the band rise from the now defunct group, The Flake, to kings of college radio with Chutes To Narrow, the break-ups, firing, and a collaboration that would become Danger Mouse (Broken Bells). A new line-up now consists of staple lead-singer James Mercer along with Fruit Bats’ bassist Ron Lewis and Modest Mouse’s drummer, Joe Plummer. With their first tour in two years and an expected album in 2012, The Shins are definitely ones to watch.

Panda Bear
While many artists likely come to disdain comparisons to their earlier projects, the truth is that if you enjoyed Animal Collective, the band which Noah Lennox founded, than you will enjoy his incarnation as Panda Bear. In fact, Panda Bear preceded Animal Collective, but it wasn’t until sampler heavy, electro beats, light-show infused AC took the stage that Panda Bear was able to launch off into more mainstream success.

Titus Andronicus
Raw punk energy seems to be the only attributable catalyst that allows New Jersey’s Titus Andronicus to keep pace with their ridiculous touring schedule. Constantly on the move, Titus brings together people in the best way they know how: screaming, yelling, kicking, and punching their way through songs about existentialism, Civil Wars, and best of all, the plight of being a loser.

Miniature Tigers
It’s no surprise that this band often receives comparisons to Neon Indian, especially on tracks such as “Goldskull,” as Alan Palomo helped to produce their album Fortress. However, while Tigers take some cues from ’80s-inspired synth, their sound steeps slightly more towards a psychedelic, folk pop.

Elbow
This Manchester band has often been on the fringes, especially to an American audience. Formed in the ’90s and nominated for the 2001 Mercury Prize, Elbow has a discernibly English sound with a gritty honesty that separates themselves from wishy-washy Coldplay or purposefully distanced Radiohead.

Girl Talk
The people who should attend Girl Talk are a specific breed. They should enjoy short walks onto the stage (Philadelphian Greg Gryllis is famous for having the crowd join him as he lurches over his sampler station), attending raves, and the ability to sing really loud to top 40 songs that they aren’t really sure how you learned in the first place.

Dale Earnhardt Jr. Jr.
Don’t let their outfits fool you. While the band is often seen parading around in Nascar uniforms, their vocal harmonies and pop sensibilities harken more to Sufjan Stevens than Bug Stevens.

Foster the People
This isn’t necessarily a vote of confidence for the band, but rather a blatant repercussion of curiosity. While “Pumped Up Kicks” has been inescapable throughout the summer, it will be interesting to see if a live show validates a title beyond a one hit wonder.

Kreayshawn
Again, curiosity beckons: this is Kreayshawn’s festival debut. People who should not attend this show: those who are still singing the Lambchop song years after departing from the childhood show. “Gucci Gucci” is worse.