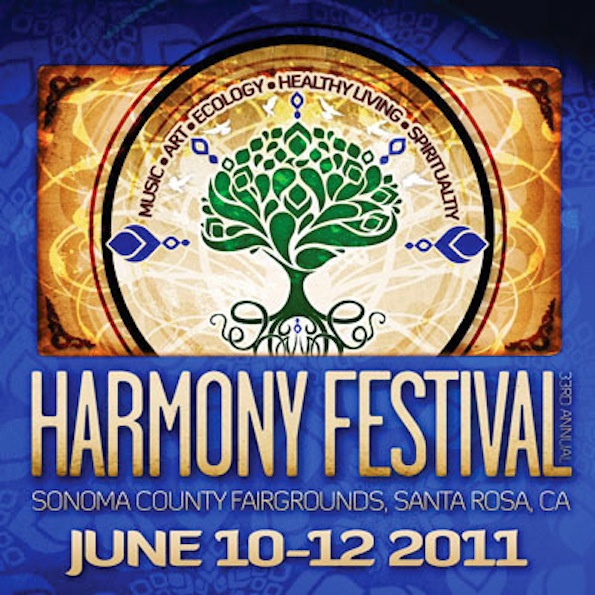 There are so many wonderful reasons to attend Harmony Festival 2011 in Santa Rosa, California this coming weekend, June 10-12—great people, fantastic food, lots of cool new ideas and of course, live music and performance. I’m in the mood for The Flaming Lips, Grace Potter and the Nocturnals, and the Techno Tribal Dance.

There will dozens of bands, some you’ve heard of and others that you’ll be talking about next week. There are bands whose names have reached a household magnitude such as Primus, The Flaming Lips, Michael Franti & Spearhead, and Edward Sharpe & The Magnetic Zeros (one of the best bands to see live this year). There are bands who call the Bay Area home, whom you may not be familiar with, but who may be deserving of some local loving; the San Francisco based soul rockers The Soft White Sixties, and out of Point Reyes Station, the Gypsy rhythms of El Radio Fantastique, and even Santa Rosa’s own harmonizing folk trio, Three Legged Sister.

I recently started an auditory love affair with the psychedelic rock quartet The Flaming Lips, I’m literally still in lust, having only discovered them this week, and so I am super psyched to see them this weekend. What I know is that they have been playing music together since 1983, three years before my birth, and have released 13 full length albums. Their song “Do You Realize??” is the official rock song of Oklahoma (did you know a state had an official rock song? I didn’t.) According to film student and San Francisco resident Stephen Garcia, guitarist in the former Northbay rock band, Echodyne, The Flaming Lips live “is a very interactive show. Be prepared to participate.”

I saw Grace Potter and The Nocturnals perform at Cornell University’s Barton Hall in April 2008 and I was blown away by the soul, power, and all around adorableness of Grace Potter, as well as the incredible musicianship and musical performance of the whole band together. The music is an Americana blend weighted most heavily with blues/folk rock aspects. I find that listening to this band live, and really absorbing the strength of Grace Potter’s vocals is like receiving a warm embrace from an old friend, it really rocks me to my core.

If that were not enough, on the night of Saturday June 11, for a ticket you must buy separately, Mystic Beat Lounge Presents The 12th Anniversary Techno Tribal Dance. You can expect to see fire spinners and aerial performers, brilliant and large installations, and Lazer shows to designed to enter through your eyes and blow your mind. Music-wise you’ll find DJs and electronic music groups playing a global array of sounds from reggae, funk, to Indian and Balkan influenced music. The funky electrodancerock duo Ghostland Observatory, drummer/keyboardist/producer Thomas Ross Turner and vocalist Aaron Behrens will be headlining along with the Bhangra influenced David Starfire Ensemble. Sebastopol’s own DJ Chango B will be playing a set early in the evening.

And what is a massive three day music festival without vendors and things to do when you are not dancing and sleeping. There will be activities aplenty to stimulate your mind and body. Check out the seminars, lectures, workshops and classes. One such extracurricular that stands out is a presentation by The Yes Men, Jacques Servin aka Andy Bichlbaum and Igor Vamos aka Mike Bonanno. The Yes Men are an activist prankster organization who employ informative and dis-informative ideological spin of a shocking and humorous nature to highlight what they believe to be acts of social injustice committed by corporations and government.

Located at the Sonoma County Fairgrounds in Santa Rosa, CA, Harmony Festival 2011 is just 55 miles and an hour and ten minutes north of San Francisco. See you there!

Grace Potter and the Nocturnals “Happy”

The Flaming Lips “Race for the Prize”