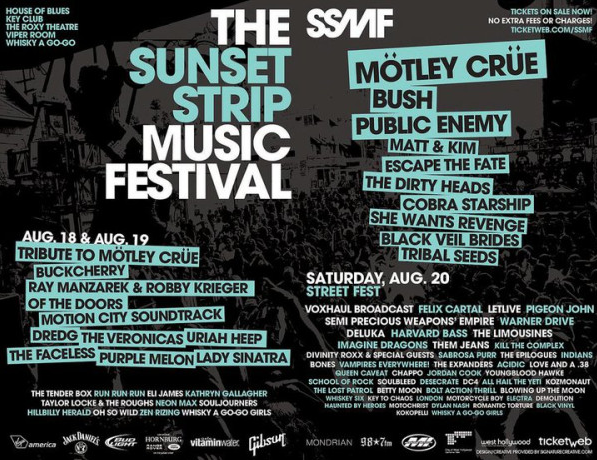 Alright musicheads, in less than two weeks time the Los Angeles/West Hollywood event of mega-proportions called the Sunset Strip Music Fest will be upon us. Three days of rock and roll of all shapes and sizes divided by 60+ bands begins on Thursday, August 18th and culminates on Saturday, August 20th in a street festival that literally takes over the territory lovingly known as The Strip.

So here are the deets:

The Sunset Strip Music Festival was created in 2008 to promote and preserve The Sunset Strip’s live music scene while paying tribute to and honoring those who have made a significant impact on its history. Past SSMF honorees have included Lou Adler, Mario Maglieri and Elmer Valentine (2008), Ozzy Osbourne (2009), and Slash (2010). This year’s honoree is none other than those iconic bad boys of glammy rock, metal, and heavily teased hair, MOTLEY CRUE! Insert a \m/ here and check what we have in store for you:

Saturday, August 20th:
OMFG… the music hits the streets for an all day event featuring outdoor stages located along Sunset Blvd between San Vicente and Doheny with performances in the venues, rooftop VIP lounge, food trucks, vendors, beer gardens, interactive experiences, and it’s the day for the major acts to shine:

Motley Crue, Bush (O_O!), Public Enemy, Matt & Kim, Escape The Fate, The Dirty Heads, Cobra Starship, She Wants Revenge, Black Veil Brides, and Tribal Seeds will all be on the street stages with many more on the club stages along The Strip. Some of the venue highlights that this gal recommends:

Are you there yet? I am!

All the info that you might need regarding SSMF can be found HERE along with a sweet video of some of last year’s highlights.

See you there, rock stars.