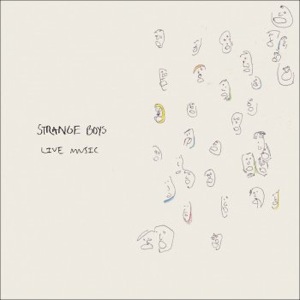 Have you ever gone to a frozen yogurt shop and you’re dying for peanut butter flavored yogurt and you get there and they don’t have it, so instead you make yourself a delicious mango froyo concoction but it’s just not as divine as the peanut butter goodness you had in mind? If you haven’t had that experience, I bet you can just imagine the taste of exceptional averageness from the second rate mango mix. That satisfying dissatisfaction is how the third album of southern rock tunes from The Strange Boys, Live Music, swallows. It’s pretty swell, it’s just not perfection.

The 14 tracks on Live (rhymes with “give” and not “five”) Music are technically broken between an A-side and B-side based on being recorded in two separate studios, but ultimately to any digital listener, it amounts to 45 minutes of all B-rank music, studio session irrelevant. There’s one stand out cut, “Me and You,” which is unsurprisingly the single and first song on the record. But Listen further than “Me and You” and you’ll enjoy run of the mill twangy guitar solo breaks, tough guy mumbled lyrics and blues piano bits—easy on the ears, but nothing to tweet about.