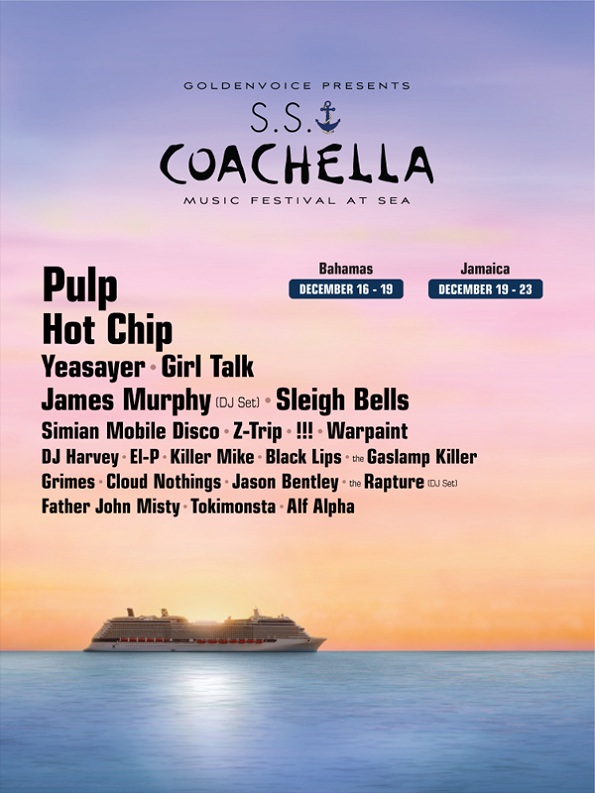 Earlier today, Goldenvoice, producers of the ever-so-loved Coachella Valley Music and Arts Festival, announced that they are taking their shows to the sea, literally. Goldenvoice is now providing music fans and festival-goers with two separate sailing options with their inaugural cruise ship festivals suitably named S.S. Coachella. Fans can choose from two Caribbean-bound adventures – Fort Lauderdale to the Bahamas from December 16th – 19th or Fort Lauderdale to Jamaica from December 19th – 23rd, 2012. The cruises will both have the same eclectic and exciting lineup aboard the luxury cruise ship Celebrity Silhouette.

Pulp will headline both 5-day cruise ship festivals with performances by Sleigh Bells, Hot Chip, Girl Talk, and many more. Of course, Goldenvoice has other activities planned and a bunch of surprises that will be unveiled as the dates draw nearer. Reservations for S.S. Coachella can be made as early as this Saturday, July 21st at 10:00am (PDT) with prices starting at $500 per person. For additional details and to make reservations, visit http://ss.coachella.com.

One advantage to having a musical festival floating across the Atlantic is that set times could be more flexible with a captive audience and no need to drive home or even walk that far at the end of the night, which for some may never end. What could be some other advantages or disadvantages to a music festival on the sea? For all the Coachella fans out there, the Owls wanna know…is the Atlantic Ocean the new Indio?