Exclusive Interview: Got a Girl 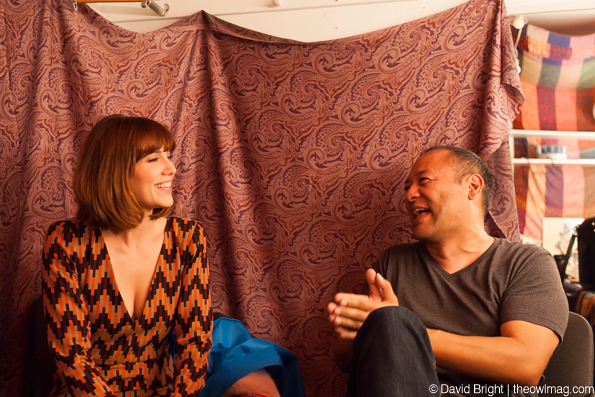 The pair met in 2009, during the making of Scott Pilgrim vs. The World, a film in which Winstead starred, and whose soundtrack featured several songs by Nakamura. After a cast dinner where the pair discovered a shared affinity for 1960s French Pop, Nakamura asked Winstead about making music together. What started off as an experiment eventually became a full-fledged musical project, Got A Girl. Their recording sessions, which began in 2010, yielded last year’s debut LP, I Love You But I Must Drive Off This Cliff Now.

After five years of on-and-off collaboration, the pair have finally taken their show on the road, during a week-long tour which saw them hit Seattle, San Francisco, and New York City, before culminating in Los Angeles. We sat down with them before their final show of the run, at LA’s Largo at the Coronet. Backstage, we discussed the sinister sense of humor that lies beneath their music’s bubbly surface, the craziest thing Nakamura’s collaborator Prince Paul ever did, and what’s next for Got a Girl.

The Owl Mag: You guys have been working on these songs on-and-off since 2010. The five dates on this tour are your first live appearances. What’s it like getting to play these songs live after having worked on them for so long?

Dan The Automator Nakamura: Everything’s been really incredible. Anything’s gonna have a little bump here and there, but it’s all worked really well. Mary’s an amazing frontperson with charisma. The show just speaks for itself, in terms of the reaction of the fans, which is actually the true judgement. I think it’s been going very well.

Winstead: Yeah, we’ve gotten good reactions so far, which has been great, because this is something totally new for me. I’ve never performed like this in any capacity until a week ago when we first started these shows. It’s a big relief for me to feel like it’s going as well as it has. It’s kind of a good thing, in a way, that it’s taken this long. We would have loved to have done shows three years ago, but since we were both doing other stuff, it didn’t happen. I know my confidence has grown a lot since I was 25, when we were first working on these songs.

Nakamura: There’s a whole lot of moving parts to doing all this stuff. Part of what happened, was, we were able to find ourselves.

TOM: How was playing live in New York?

Nakamura: Awesome. We had a good time.

Winstead: Had you ever appeared at Joe’s Pub before?

Nakamura: Apparently I had, but I didn’t remember. I did a show with Paul [legendary hip-hop producer and rapper Prince Paul, Nakamura’s collaborator in the group Handsome Boy Modeling School] back in 2000. Apparently, he did the whole show in character, from the time we arrived, to the time we left. A couple of my friends who were there said that was the craziest, funniest shit they ever saw Prince Paul do. 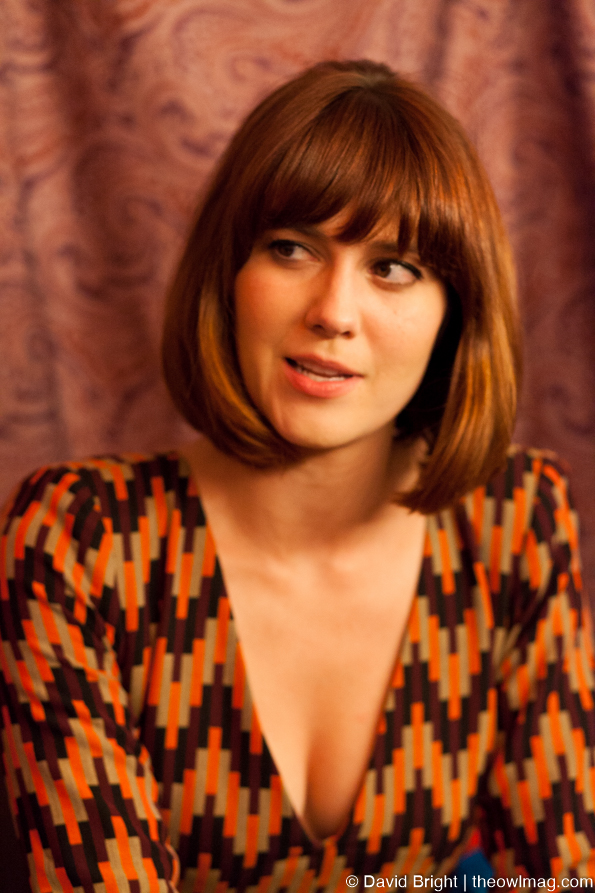 Winstead: He was with us in New York, which was really cool. He made a special appearance, and it was the first time you guys had been together onstage in like ten years.

Nakamura: Yeah, we did a show on New Year’s, but it was a dj show. We hadn’t done the actual thing.

TOM: Mary, you’re well known for your acting. Since acting is also a creative endeavor, is there a different energy that goes into writing and performing these songs? Or does it all come from the same creative place?

Winstead: It’s interesting. Part of what made it easier for me jumping into this rather than another musical endeavor, is that I feel like Dan’s music is really cinematic and visual. Any time he would send me a track to start writing to, I would see images of movies, I would feel that kind of vibe. The characters that came out of this felt like a role that I really wanted to play that was part me, part an embellishment of me. Those are the kinds of roles I tend to veer towards, anyway, so that was kind of perfect.

TOM: You mention characters. When you guys are onstage, do you feel like Mary and Dan, or is it “Mary” and “Dan”?

Nakamura: I might go with the quotes a little bit.

Winstead: It’s kind of a blur.

Winstead: I think any time you’re onstage, there’s gotta be an element of something larger than you.

Nakamura: It’s like Ethel Merman and Ricky Ricardo [laughs]. Everyone has thoughts and feelings, and I think we’re expounding on certain aspects of our personalities.

Winstead: It’s a specific moment in time that’s maybe not us all the time.

Nakamura: It’s an expansion, in certain respects. Jodie [Foster, acting legend whom Nakamura had dinner with before the show] loved the fragrance I gave her.

TOM: Is that the EO Fragrance?

Nakamura: Yeah, she was putting it on like, “I need a new scent.”

TOM: What inspired you guys to do the fragrance?

Nakamura: We just try to have fun.

Winstead: All of those collaborations came out of people that we’re friends with, or people that we wanted to hang out with and make things with. Even olive oil.

Nakamura: The thing is, we are like a lifestyle. We’re lifestyle consultants.

Winstead: Expanding on the music. It’s more like what we represent as a whole.

TOM: And what is it that you guys represent? 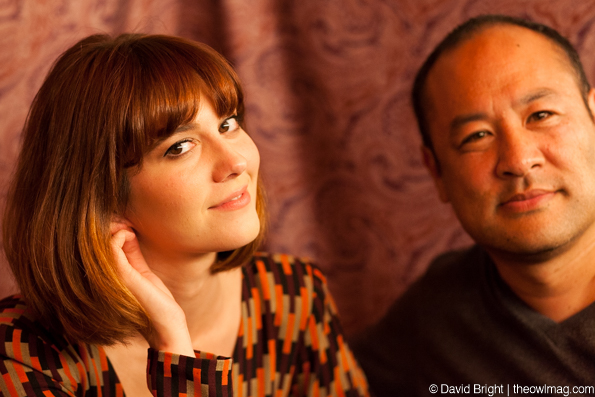 TOM: On your record, you guys are influenced by ‘60s pop, music that’s older than you are. Have you guys been listening to this music since you were younger?

Winstead: I’ve listened to ‘60s music since I was a kid. I’ve been a ‘60s fan in general. About a year before I met Dan, I started going down the ‘60s French Pop rabbit hole, specifically. It was fortuitous that we met and he had this idea to do something French Pop-inspired, and I was at the time really into that genre of music. I hadn’t really discovered it until I was in my early 20s or so. I definitely became really into it at that point. It was one of those weird coincidental moments.

TOM: What kind of music did you guys listen to when you were younger?

Nakamura: I listened to a lot of things: rap, some funk, soul, rock. I’ve always liked music, starting with classical music. Genres are good in terms of giving you an idea of what it is, but genres aren’t important to me, personally. From pop, to really obscure Krautrock, if it catches my attention, I like it.

Hip-hop obviously had an influence on me in terms of production, but I don’t really make hip-hop records. I don’t really use those skills too much to make my records. I’m not saying it was a phase in my life, I still love that stuff, but I know a lot of people in the business who do one kind of thing. That’s just not what I do.

Winstead: His music is a melding of a lot of things.

Nakamura: I think at this point, nothing’s really “original,” but you take bits of stuff from here and there, and make it what it becomes. Even our record, people say “Oh, it’s French pop,” but no French pop record would ever sound like this.

Nakamura: As much as I agree that that’s the genesis of where we came from —

Winstead: We ended up with something else.

Nakamura: It’s a different energy for every project, honestly, because of different people, so let’s leave that out of the equation. There’s certain people you work with who are difficult [playfully gestures to Winstead]. For the most part, though, I work with people I like. If I throw something at Mary, I know it’s gonna work. Even if the song’s wrong, we’ll make it work. That’s why the first couple of songs were the hardest, because I was trying to figure it out. Once I figured it out, boom, we do it, and we do it, and we do it.

With her, it’s easy in the sense that I know it’s gonna work. It’s gonna make me happy to make it. That’s the best way I can put it. There’s jobs, and not jobs. I’m trying to never have a job, and what I mean by that is never feel like I have to grind through to make this happen.

TOM: You guys said you represent fabulousness, however throughout your guys’ music, your videos, even your album cover, there’s a certain sinister undercurrent, a dark sense of humour. From afar, the album looks like a classic ‘60s album cover. It says “I love you,” but then in smaller text, it says “but I must drive off a cliff.” Is that something that came about naturally?

Winstead: Yeah, we’re both drawn to the light and the dark, and having that balance. We wanted everything to be a little bit tongue-in-cheek. Everything Dan does has that quality to it. That’s kind of what this needed. If it was all bubbly, silly French Pop, I think we’d be a little bit bored by it. We needed to add some off-kilter weirdness to it.

Nakamura: Same if it was too dark.

Winstead: Yeah, then that’s boring, too. For me, my favorite song on the album is “Put Your Head Down,” which is this weird, murderous, obsessive love song. I really love that kind of thing. It makes me smile in a kind of sadistic way. I love the balance of the poppy, silly fun with the darker side.

TOM: What’s next for Got A Girl? Will there be more shows? More new music?

Nakamura: We’re both in businesses where we’re both very busy. I really enjoy working with Mary. If it makes sense, we’ll do more.

Winstead: it’s all about timing. We both have a lot of fun doing this project. It tooks us five years to get here, so you never know what’s gonna happen.

Nakamura: I feel like, in spirit, we’ll continue to do shows, and make more music. it just has to fall into place.

Got A Girl’s debut album, I Love You But I Must Drive Off This Cliff Now, is available now on Bulk Recordings.