A modest sized and age-diverse crowd gathered at Slim’s to see Twin Sister and The Pains of Being Pure at Heart kick off their fall tour together last Friday in San Francisco. The commingling of Gen X’ers who recall the cardigan and Doc Martens-wearing days of their younger years and their neophyte Net Gen counterparts made complete sense given the trending resurgence of early 1990s-inspired indie pop and the common comparisons drawn between The Pains and bands of twenty years ago. 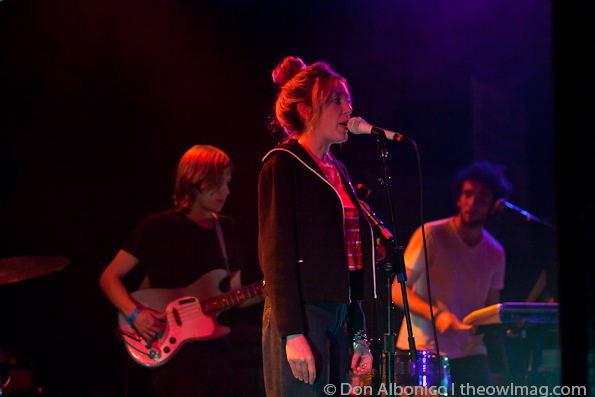 Though the vast majority of people in attendance were not old enough to have lived through the disco era of the 1970s, Long Island’s Twin Sister subtly gave a little taste of what that scene might have been like, minus the shiny disco ball and ridiculous dance moves (think hipster disco, not cheesy Bee Gees disco, mashed with modern electro-pop). This temporal reference was captured in a lot of the band’s more uptempo songs, personified by Andrea Estella’s breathy panting vocals, and rounded out by Dev Gupta’s massive keyboard and synth set up. 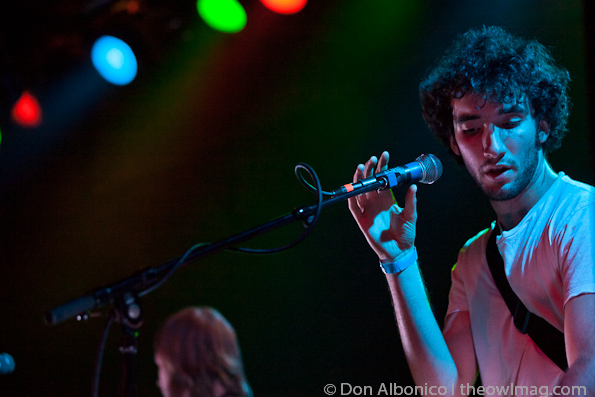 Estella tends to use more of a head voice which creates a wispy and abbreviated vocal style similar to Bjork or Debbie Harry in the early Blondie days. While tracks like “Bad Street” and “Stop” are infectiously danceable, their live performance was a bit lackluster which seemed the most easily attributable to the fact that Friday marked the start of Twin Sister‘s first tour for In Heaven. Once these guys settle into the groove of the tour, they will undoubtedly become masters in showmanship. 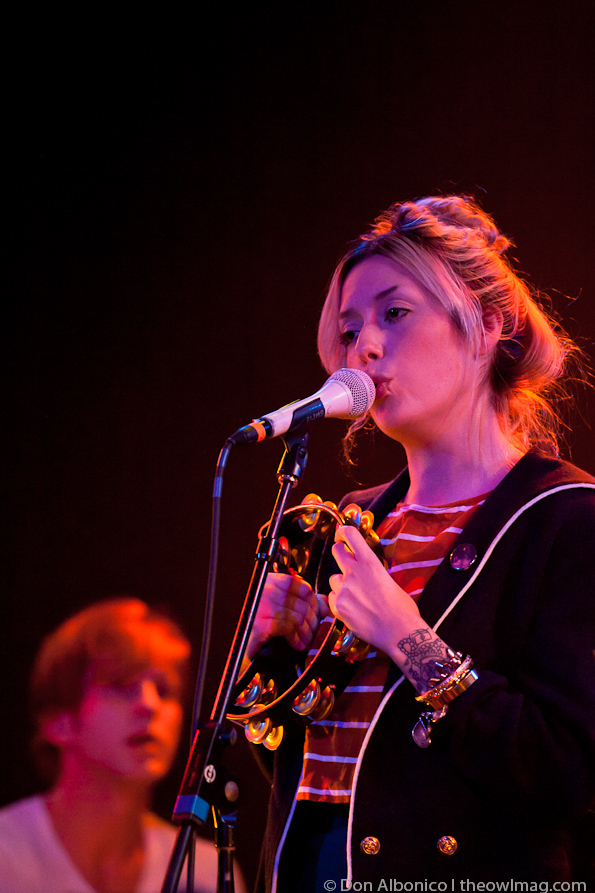 It’s difficult to experience The Pains of Being Pure at Heart without feeling oddly compelled to reminisce about the awkward coming of age period that most of us go through in our lives. Remember that younger version of yourself that would just unabashedly… feel and try to make heads or tails out of those emotions? It can be strenuous on the memory trying to recall a state of feeling from decades past. But just as your sense of smell can trigger memories, The Pains’ twist on the indie pop aesthetic of the 1990s provided the catalyst that stirred up those lost emotions while still coming across as relevant to someone currently discovering those feelings for the first time. 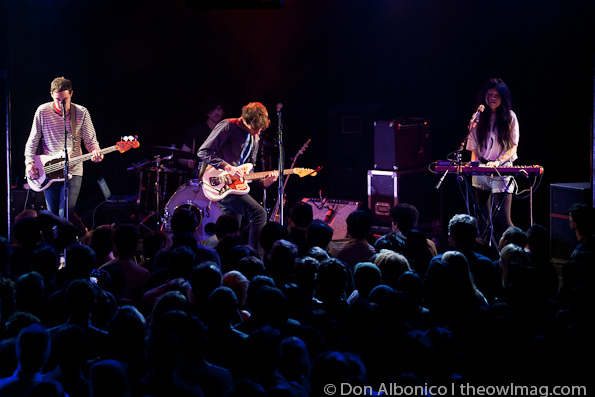 Though conceptually thought of as a fuzzy lo-fi band, The Pains downplayed the reverb on Kip Berman’s androgynous vocals and turned down the distortion on Christoph Hochheim’s guitar which resulted in a more streamlined clean sound. While each of the five members was visibly engrossed in their own performance and had little to no interaction with one another, the on-stage chemistry between them was apparent in the coincidental synchronization of Hochheim, Berman, and bassist Alex Naidus’ stage movements and general ease emanating from the collective group. In between songs, Berman engaged the crowd with his soft-spoken and genuinely sweet demeanor asking, “Are you having a good time? That’s not a perfunctory question. We want to make sure you’re having a good time.” 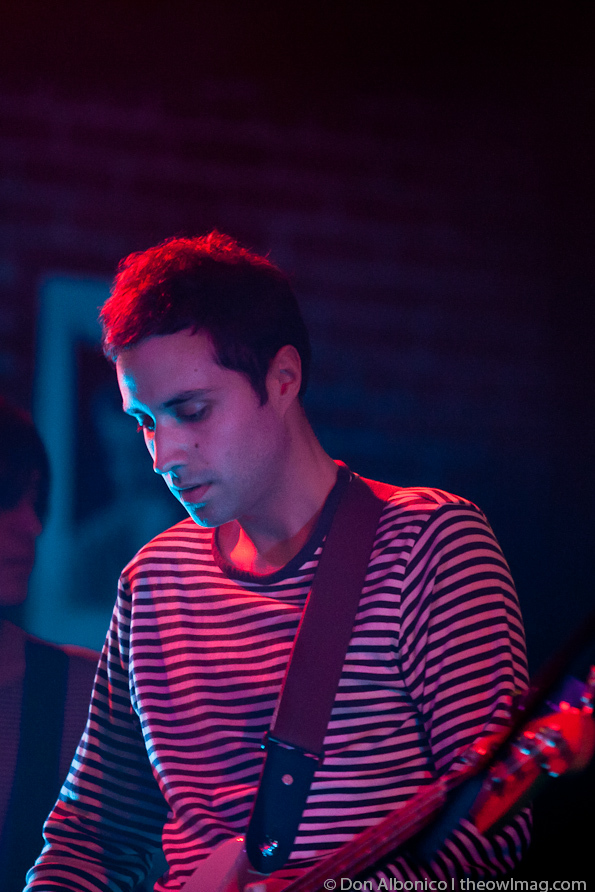 As the lead vocalist, Berman is by far the most dynamic member of the group so it was easy focusing on him or keyboardist Peggy Wang as she gazed out between her long black locks. Hochheim is a quietly skilled guitarist who goes slightly unnoticed, but when the band broke into “A Teenager in Love,” Naidus and drummer Kurt Feldman provided a solid rhythmic anchor to Hochheim’s attention-grabbing guitar section at the end of the song. 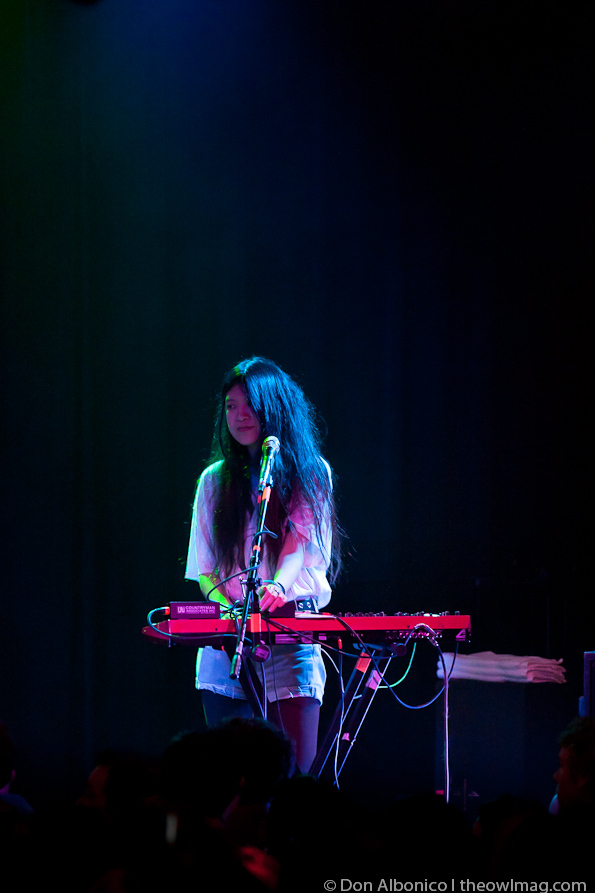 The most poignant moment of the evening came in the encore when Berman appeared solo on stage and attempted to hastily tune his guitar for what felt like minutes. As he strummed the first few chords of “Contender” he abruptly halted to self-deprecatingly say, “That’s why I was never a contender because I can’t even tune my own fucking guitar.” That one mistake aptly identified those lost emotions and memories that we strain to remember from so long ago – those moments when you realized how awkward and slightly out of step you felt while simultaneously trying to figure out how to blend in with the rest of world. 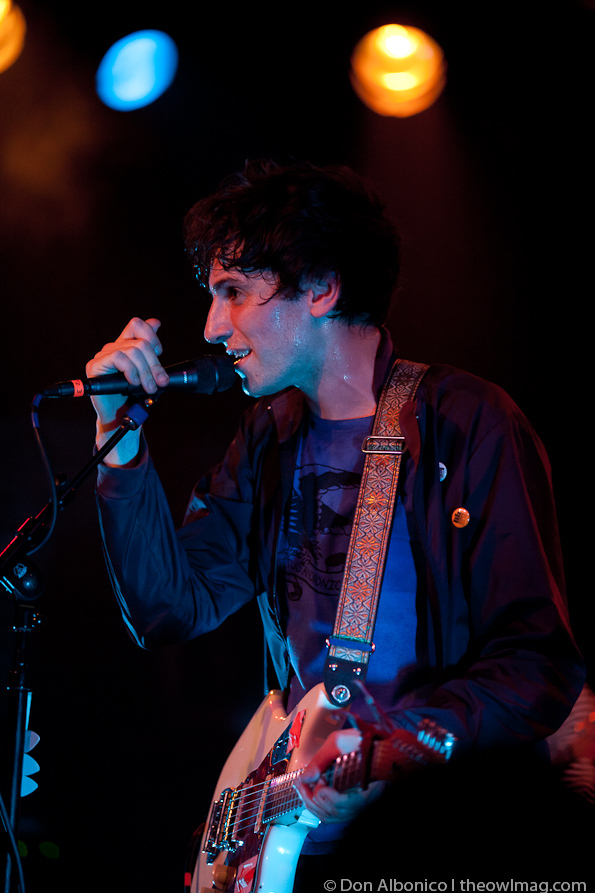 Whether performing songs about pining after a lost love (“Heart in Your Heartbreak”) or feeling a connection with someone who is as awkward as you (“Belong”), The Pains wear their hearts on their sleeves and make no apologies for pouring themselves into pop songs about feeling.