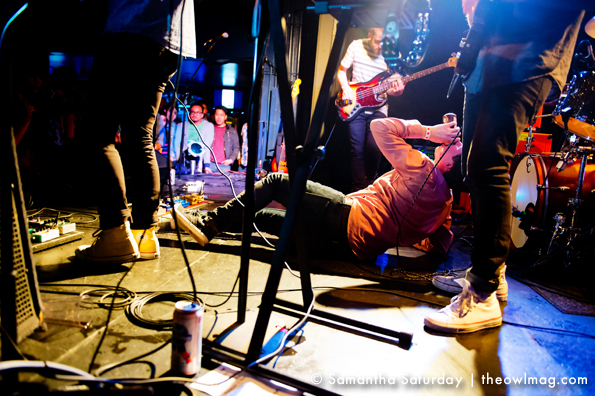 The western and eastern coasts of the US were united last Friday as West Palm Beach, Florida’s Surfer Blood kicked out their surf rock jams at The Echo.

First, from the north-east coast, Grand Rapids brought some Americana rock to warm up the crowd. With a classic four-piece lineup, the New York group brought a surprising twist to open the night.

Finally, as fans just about finished trickling in, it was time for Surfer Blood to take the stage and get the party started. The crowd was bobbing up and down on their toes practically as soon as the band plucked out the opening chords to “Floating Vibes.” One particularly enthusiastic, long-locked fan bellied up to the front of the stage, providing a show within the show. (At one point mid-show said fan ungracefully launched his way up onto the stage.)

As always frontman John Paul Pitts brought his offbeat charm to the performance. Pitts’ classic stage-dive/crowd-surfing antics ended a bit tensely as his return to the stage was less than graceful, landing back-first on top of a pedal board. Nevertheless, Pitts quickly regrouped and the band forged on.

Filled with new songs, Surfer Blood’s performance is proof that they are nowhere near slowing down, continually churning out top-notch tunes and always delivering a show nothing short of spectacular and damn fun.