Once again the Sunset Strip, one of rock ‘n roll’s most famous – and infamous – hot zones, hosted its outdoor street party, the Sunset Strip Music Festival. This year at the music fest, it felt like rock ‘n roll was taking stock of itself, looking back at its sordid history, gauging where it is, and trying to figure out where it’s going. The festival continued its tradition of honoring LA’s rock greats, and this year’s fest was dedicated to classic rock stalwarts the Doors, with acts both old and new paying tribute while showing off their own considerable talents. 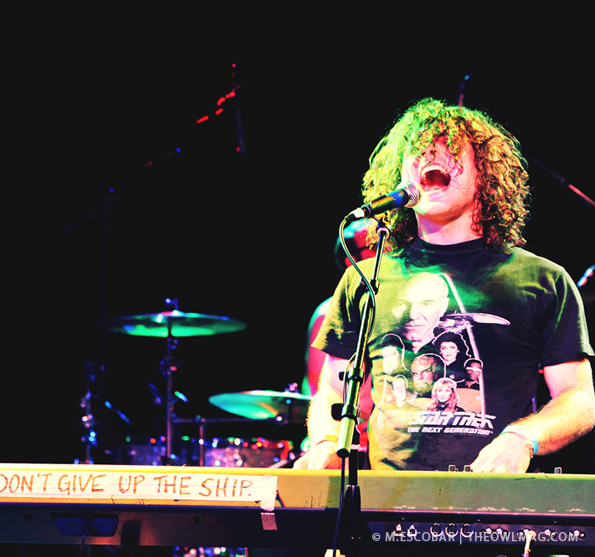 The Burning of Rome

We kicked things off this year with The Burning of Rome, inside the world famous Roxy. The first thing we noticed about this San Diego five-piece was guitarist Joe Aguilar, whose moustache, mane of wild hair, and lack of shoes made him look like a muppet, especially when he bounced around onstage. Aguilar had musical chops, though, guiding the band on songs that went from hard-rockin’ sea shanties to Soundgarden-esque stoner rockin’. Since they were early in the day, the club wasn’t very full, but the band still put forth a strong effort, with lead singer Adam Traub standing on his keyboard while belting out powerful vocals.

The festival’s two main outdoor stages, the West Stage near Doheny Ave, and the Monster Energy East Stage near San Vincente, were both plagued by delays. The more rock-oriented West Stage was supposed to start at 2:30pm with fast-rising LA hard rockers Dead Sara, but at 3:00pm, crews were still trying to set up barricades. Security couldn’t open the general admission area immediately in front of the stage, instead holding eager fans about half a block away. 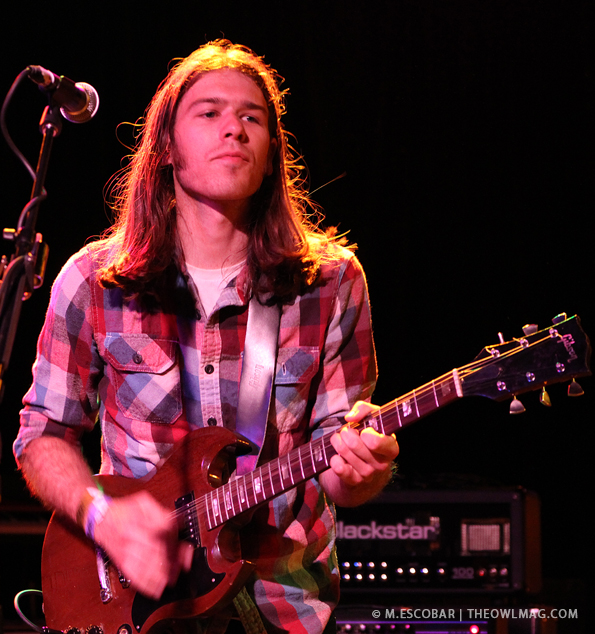 The Roxy, however, was running a tight ship, so we caught San Francisco’s The Stone Foxes next. These guys can really rip on their Southern-fried blues rock numbers. Bassist Aaron Mort hit some sweet vocal high notes on “Patience,” while guitar wizard Spence Koehler brought his husky voice to “Small Fires,” which had the band jumping around onstage. Their set did hit a small lull towards the middle, but then drummer Shannon Koehler stepped up to lead vocals, and his energy and harmonica playing helped them kick it up a notch on their last three songs. They kept the energy going once Mort jumped back on vocals with drums-and-vocals jam “Stomp,” and they finished off with an absolute barn burning cover of Slim Harpo‘s classic “King Bee.” 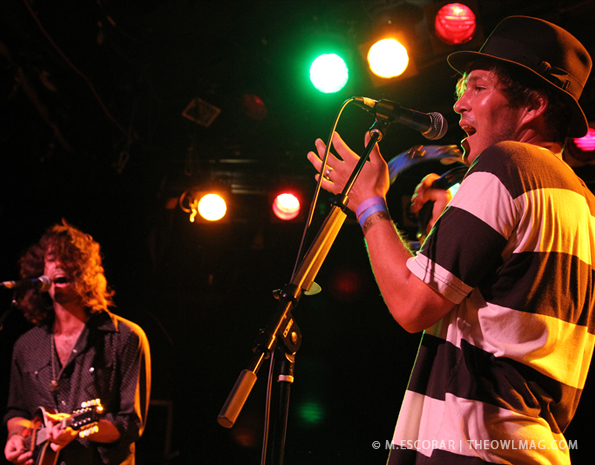 Coming out of Venice, CA, Terraplane Sun continued the Roxy’s bluesy vibe. “Funnel of Love” perfectly captured that Nuggets-era garage rock sound that a lot of bands strive for, even down to Ben Rothbard’s vintage sounding voice. “Tell Me I’m Wrong” found organist Gabe Feenberg breaking out a trombone for a solo that the crowd loved. Feenberg played a screaming organ on “Keep Me Golden,” from their recently completed EP, which sounded great. They closed their set with an epic cover of Dolly Parton‘s “Jolene.” Feenberg’s trombone made another appearance and the club, which was full for the first time in the day, really got into it. Before finishing, the band even dropped a few lyrics from the Doors‘ “The End.” 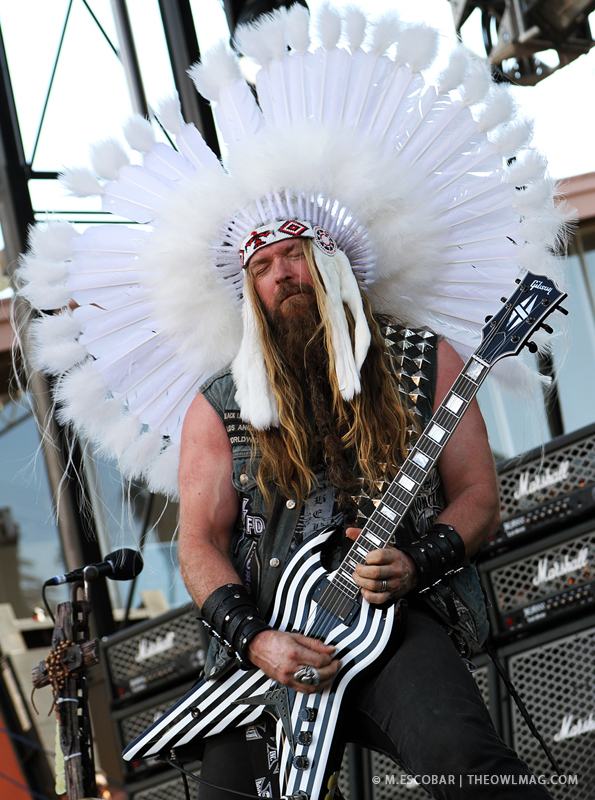 Black Label Society, led by frontman/Ozzy Osbourne guitarist Zakk Wylde, put on a crazy heavy metal set on the outdoor West Stage. Playing his signature spiral-finish guitars, Wylde took the stage wearing a wild (no pun intended) feathered headdress. Wylde of course broke out some hot and heavy guitar histrionics, while bassist John “J.D.” Deservio hammed it up for the cameras. A highlight of their set was when the Doors’ Robby Krieger joined them onstage for a faithful cover of the Doors classic, “Roadhouse.” 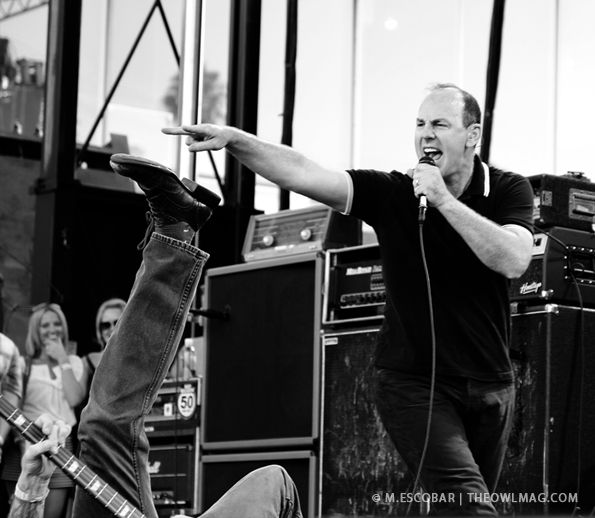 At this point, it’s easy to dismiss the idea of seeing Bad Religion live as not being an exciting prospect. It feels like all of their lyrics are burned into your brain from constant radio airplay, but their appearance this time served to remind that after all this time and fame, they’re still a great hardcore punk band. Thirty years in, they may look like a bunch of soccer dads, but they’ve got three generations of fans on the West Stage going in the hot afternoon sun. In addition to their hits, they dug deep into their catalog, playing older songs like “You Are (The Government)” and “Anesthesia.” Instrumentally, they were spot on, though towards the end of their hour-long set, vocalist Greg Graffin did start to sound a bit tired. 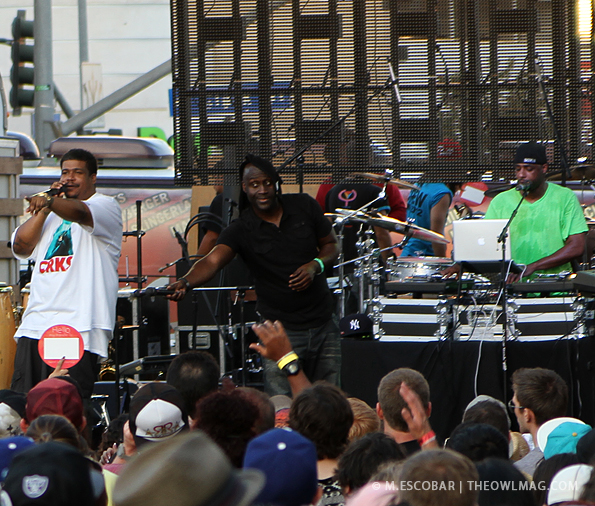 Hip-hop innovators De La Soul played the more dance-oriented East Stage for a crowd that was receptive, if not huge. They got the best reaction when they played their biggest hits, “Buddy” and “Me, Myself, and I,”” from 1989’s 3 Feet High and Rising. 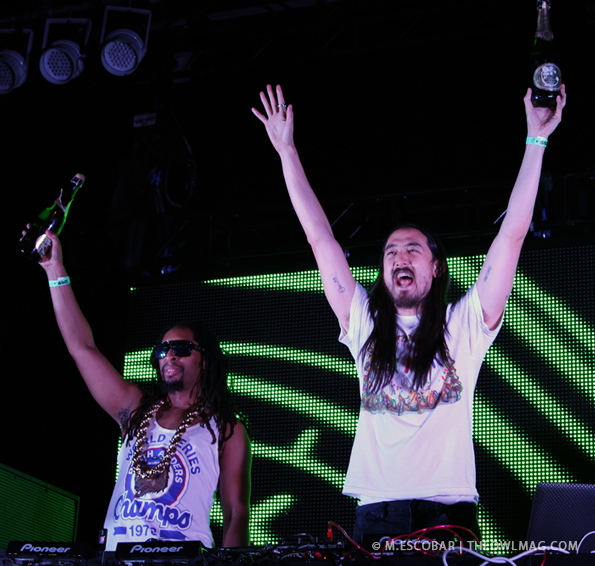 The East Stage continued to run behind schedule, with co-headliner Steve Aoki starting 45 minutes late, despite Far East Movement skipping their set, in order to move to inside the Roxy. When Aoki did hit the stage at 9:00pm, his set was a tribute to excess: excessive consumption, excessive lighting from fixtures placed atop businesses lining Sunset Blvd., even excessive volume. Dude was loud, and he got club kids and bros alike dancing and grinding in the streets, participating in call-and-response, and even breaking out those old rave standbys, glow sticks. Aoki then produced an inflatable air mattress that a few young ladies used to crowd surf. There was a video screen behind Aoki with graphics that thumped along to his pounding bass beats and rapper Lil Jon made an appearance, spraying the crowd with bottles of champagne. While Aoki’s brand of electronic dance music is admittedly not this Owl’s exact cup of tea, his set was still a sight to behold and experience. 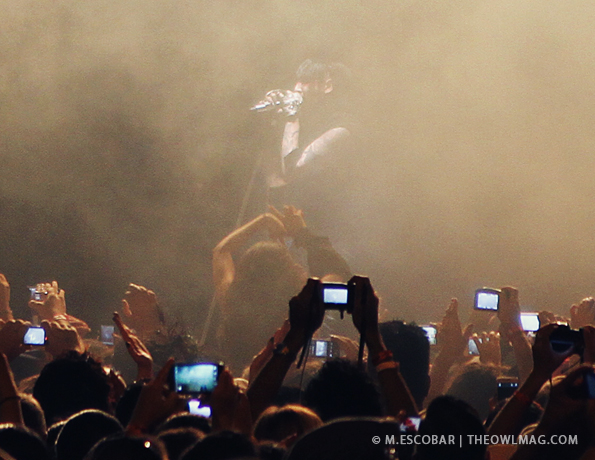 Marilyn Manson closed out the outdoor portion of the fest on the West Stage. It’s almost quaint to think about it now, but at one point not too long ago, Marilyn Manson was the boogeyman that America feared most. While he is no longer the nation’s nightmare provocateur, he can still cut a menacing figure; you don’t spend all that time in the spotlight without developing an undeniable stage presence. Marilyn Manson is human after all, though, and his face now sags despite his makeup, and his voice can’t quite hit the high notes on “Disposable Teens” or bring the fire to “Love Song.” As musicians, he and his band actually did make some really good music in their career, but their stage schtick was never bound to age well. It’ll be hard to tell when Manson slips full on into self-parody, but he’s already starting the journey.

Like Manson and the Sunset Strip, rock ‘n roll appears to be at a crossroads in 2012. Can one genre still be the sound of youthful rebellion generation after generation? Or will today’s brash young rockers be tomorrow’s suits and ties? In the post-internet age, it seems almost inconceivable that rock as a concept would still be around, but rock ‘n roll was never just music, let alone one genre of music. Acts like Steve Aoki may not be guitar, drums, and bass driven, but the same spirit that brought the Sunset Strip to rock ‘n roll fame decades ago still permeates through the electronic dance music of today.

That spirit even brought fans that we spoke to from as far away as Arizona, who’ve come year after year to see some live hard rock and heavy metal. Anything that inspires that kind of passion is bound to survive one way or another, and this year’s Sunset Strip Music Festival, where young bands like The Burning of Rome, Stone Foxes, and Terraplane Sun outshone their predecessors, showed just that.

Check out even more badass photos from SSMF here!