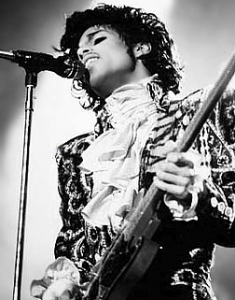 In somewhat of a surprise announcement, Prince announced 3 shows at Oracle Arena (all of which of course sold out in a matter of hours). As expected, Prince decked out the Oracle Arena in purple, disco balls, and even more purple. Oh, and of course the stage was shaped like the infamous,Â unpronounceable “love symbol.” Â Naturally.

Originally billed with no openers, Prince managed to squeeze two in, one being the legendary Larry Graham. Graham hit the stage with his band, Graham Central Station, looking like the most badass pimp on the planet, and slappin’ his bass like it was holdin’ out on him. It was pure funk on funk with some more funk after theÂ initialÂ funk was funked out. Get all that? For the encore, there was a collective “Holy shit!” throughout the crowd as the lights came back up and everyone realized Prince was on stage for a song with Graham Central. Epic. Lights on, time for a beer-induced recovery after that funky pimp slap.

As the lights dimmed, Prince’s silky, dare I say, delicious voice announced “This is the best place to be on Earth right now.” And man, was His Purpleness right. Lights off, Prince is coming, and the crowd lost its shit. As he rose from a trapdoor under the stage, the noise decibels hit unsafe levels. Many things can be said about Prince. However, one thing must always be stated, the man is a virtuoso at everything he touches. He can shred, he can sing, he can dance, he even jumped on the bongos and wailed on those for a while. And that famous Prince falsetto? All Prince. No autotune, no nothing, just talent. All with the kind of showmanship I thought died when David Lee Roth left Van Halen in 1985. And he was soÂ cocky. “Y’all ain’t ready for me,” he quipped as he jumped off his purple piano in his sparkly platform shoes. No, Prince, clearly we weren’t. He stuck to a lot of his new album for the first half of the show. In fact, it was about an hour before he even played any old songs, but when that time came, it Â was “Purple Rain,” and life was good. I don’t get emotional much, but there definitely wasn’t a dry eye in the house after that song. Seeing Prince was an amazing, life altering experience, and is definitely someone that you absolutely must see before you die.Â And considering how much energy this tiny man still puts into his shows after all these years, there’s no doubt that he’ll be doing it for years to come.