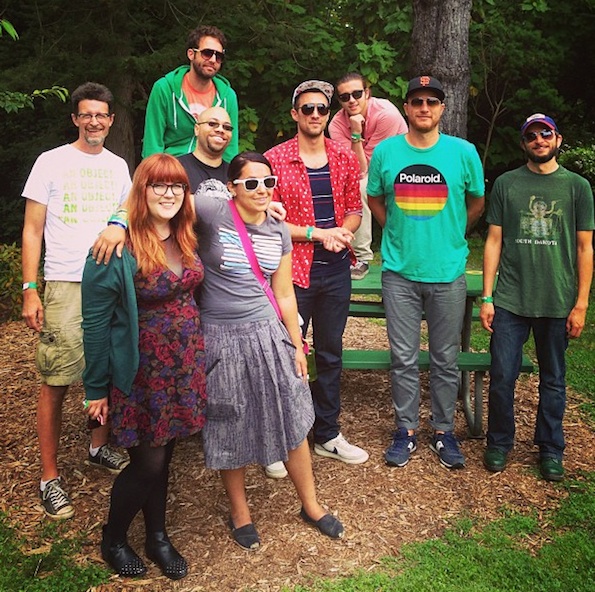 Outside Lands is like an Off the Grid on PEDs. Every nook and cranny of the dusty, wind-tattered polo grounds is ass-injected with pig fat, lamb shanks, melty cheese, and something fermented or fried. And that’s just the walk from the Pan Handle to Twin Peaks. It’s the worst place to maintain a diet. You’d be stupid to try. In between food, beer, walking, and food, did I actually catch some music at Outside Lands.

Music may be the main course for your senses but it’s your nose that guides you. Of course, everything tastes exponentially better when you’re buzzed, even those hot water dogs in the carts are perfectly snappy.

Long story short, here’s a list of what I ate and drank. Music in between.

I started the day with about 4 mimosas. Every year, some Owls gather at the Stowe Lake Boathouse in the park to share show war stories, talk about who/what we’re excited to see that day, what the previous day was like, (Paul McCartney!) or meet face to face for the first time.

I didn’t have any morning coffee having instead started immediately working towards a different kind of buzz (thank you Proseco). So this milky sweet coffee from B-Bots hit the “I’m close to a caffeine headache if I don’t drink some now” spot. Once in hand I headed to Milo Greene. I have to thank @indiequick for the intro. What a chill experience. Every member is blessed with a voice and the harmonies were a perfect fit for Sutro. The Sutro Stage is a cinematographer’s wet dream. It’s tucked under a hill, surrounded by eucalyptus and pines which spilled dappled light through the stage. I also love it when musicians swap instruments without missing a beat. The highlight was listening to them play “Chicago”, by Sufjan Stevens.

3. 4505 Burger and Chicharones and Youth Lagoon

Now we’re getting somewhere. It’s always smart to take advantage of small lines in the early hours of any festival. At least that’s how I justify eating pig fat. If you haven’t had one of their burgers, you haven’t really lived. Ryan Farr’s burgers are juicy, cheesy, and the buns or buttery and crisp. Add a few red onions and tomatoes and you’re ready to make out with someone. The spicy sweet crisp of fried pig skin really sets your senses off. Those chicharones are like pig fat M&Ms, they melt in your mouth. So good. I took that, grabbed a Pale Ale and headed to Youth Lagoon.

The chill tone of Saturday continued. Youth Lagoon is one of those bands where you have to be in a mood; all the elements have to line up. You’re surrounded by friends, lying on a blanket, your stomach is full, beer in hand, and the band is on the Twin Peaks stage. Without at least 75% of those things Youth Lagoon might be too dreamy. Trevor Powers’ voice rang out through the park lulling spectators into a contemplative day. In a good way, but maybe a bit too introspective for mid-day.

Man did she look and sound smoking hot. She was wearing a fuchsia? (not sure on my colors) dress that delicately bounced with her every hip shake and strum. Even though she was killing it, I was being lulled back into that chill state. (That could’ve been the beer.) So I quickly walked over to Jurassic 5 and the mood completely changed. A jolt of energy hit my legs as I joined in with J5’s standard call and response style rap. It brought me back when I heard “Concrete Schoolyard” and “What’s Golden” and I couldn’t help but bounce up and down. I took one bite and warm, silky yolk spilled out from the buttery brioche bun. Heaven. Chase that with another Pale Ale and I was perfectly prepared for the YYYs. At least that’s what I thought. The YYYS owned the day. I’ve never seen a happier bunch of musicians play such intense, heart-thumping music. Karen O is my hero. My highlight was “Maps”. I felt as if they were whispering the song in our ears. There was a hush in the crowd as we hung on Karen’s every move. Since I didn’t drive, I had one more Pale Ale for the road. I happened to hit Grizzly Bear as the first notes of “Two Weeks” hit the keys. “Ah oh ah ahhhh”. Perfect. Is there a tighter sounding band live? Ed Droste of Grizzly Bear put it best: “You guys have the bougie-ist food stands of any festival.” Truer words never spoken.

Saw Phoenix at OL two years back. No interest in NIN. Sorry.