BEST OVERHEARD AT OUTSIDE LANDS: “Does this handbag look dirty hipster or really ’90s?”

The final day of any festival is usually the best for us. Somehow it’s always less pressure when looking forward to a single day of hard concert-going rather than two more after an initial kicker. This may make festivals sound like a job but damn it, they are! Festivals are not easy. They make you work for your music.

The sun was finally flirting with us through the clouds just in time for Fun., which was appropriate considering frontman Nate Ruess was flirting with each and every one of us. Ruess was buoyant all over the Land’s End stage, giving us the same energy that Duckie gave us lip syncing to Otis Redding‘s “Try A Little Tenderness” in Pretty in Pink, as they pumped the crowd with one of this year’s anthems “We Are Young.” Try and tell us that Ruess isn’t channeling a young Jon Cryer. We stuck around for Glasgow natives Franz Ferdinand, who surprised us when they did a short cover of disco diva Donna Summer‘s “I Feel Love.” Their finale definitely deserves the over-used word epic, as they concluded their set with the explosive “This Fire,” with the whole band playing the drum kit at once for the last minute!

It all started with a morning trip through Chocolands, the forest trail of caffeinated pleasures that connected stages at OSL. There in the misty clearing was the indelible sight of the Third Man Records Rolling Record Store. Early risers were there to claim their prize of a limited edition “Lightning Bolt” vinyl copy of Jack White’s Blunderbuss. Turned out that it wasn’t the only treat in store for the inhabitants of Chocolands, as equipment started being set up beside the van at about 2:30pm. A crowd congregated on pure faith alone, ignoring the siren call of Franz Ferdinand beckoning from the main stage. Everyone in the crowd was hoping against hope, scarcely believing their luck, but avoiding speaking aloud for fear of the jinx. When the suspense had reached its peak, Jack and the band sashayed out, had the front of the crowd kneel to help everyone’s sightlines, then blew through a mini Jack White history lesson, including “Love Interruption” from Blunderbuss, The Raconteurs’ “Top Yourself,” and The White Stripes immortal “Hotel Yorba.” As if that weren’t enough, Tom Morello came on, rocking his Nightwatchman persona, and served up two songs, before bringing out The Coup’s Boots Riley to aid and abet his rendition of Woody Guthrie’s “This Land Is Your Land.” A fitting end to a magical moment in space and time in a little wooded alcove of Golden Gate Park. Somewhere, Ranger Dave was smiling. 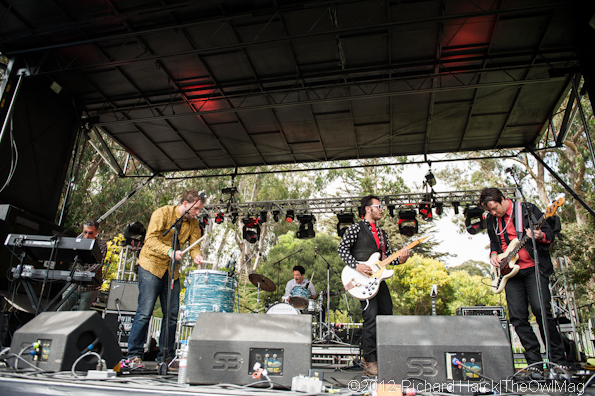 Brooklyn’s Caveman helped kick off a day that was spent mostly at the Panhandle stage, which we have much affection for. Panhandle is like the refueling zone where you can grab some lunch, take a little nap, and enjoy some soothing sounds. Not to mention it’s the stage where we have seen many an awesome OSL band including The Heartless Bastards. Caveman’s lulling, atmospheric brand of alt-rock was definitely a calming, universe-aligning experience. With just a touch of synth trimmings, their sound meets the modern-yet-throwback requirements for up-and-coming bands of the moment, yet carves their own special signature into the genre. Here’s hoping for hearing more from them.

Indie queen of quirk Regina Spektor – before Zooey Deschanel – was so humble, thanking us after nearly every song. Seemingly awed by the crowd, Spektor was so endearing, and we weren’t surprised to see a few eyes glistening when she sang “Samson.” 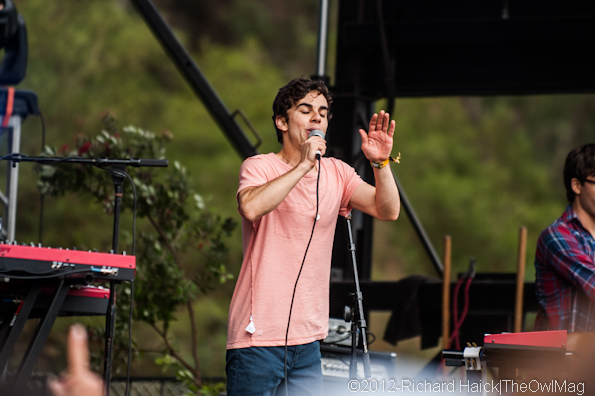 Electric Guest was next to take the Panhandle stage, waking the floor out of their food comas with some playfulness and definite personality care of singer Asa Taccone. A Berkeley native, Taccone remarked on how it is to relocate to the city that Electric Guest calls home, Los Angeles. “It’s very different,” Taccone said. “People play beach volleyball and try to look attractive and shit.”

Taccone may be from the Bay, but his vocals and showmanship are all Broadway. The band effectively sets jazzy crooning against a poppy background making for dance music with a soulful edge. Aside form that, you just want to eat little Asa up with his 12-year-old face and his smooth moves. Truly adorbz. 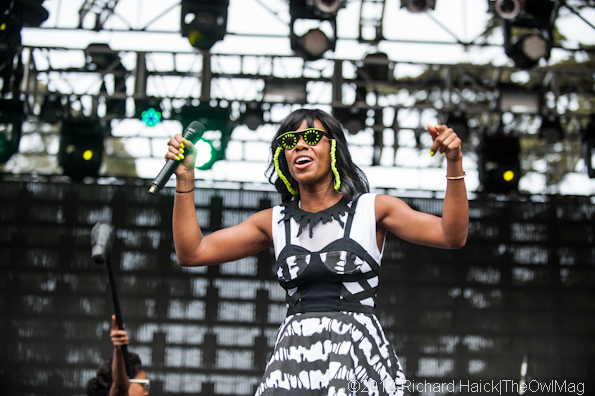 Santigold, who stopped at Outside Lands to perform on the Twin Peaks stage after recent performances in Las Vegas, put on an energy-infused set full of backup dancers and coordinated band members. Who needs explosions when you have costumes? We loved how Santigold pulled kids up on stage to dance with her, as long as they didn’t get in the backup dancers’ way, because they were busy fiercing it out. She looked out into the crowd after rousing performances of “L.E.S. Artistes” and newer tunes like “The Keepers” and told us, “We were tired, but now we feel invigorated. Mainly because of you two bananas. Especially the banana with the goggles.” 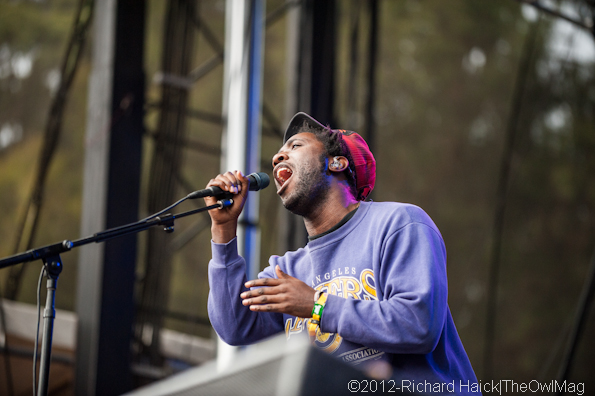 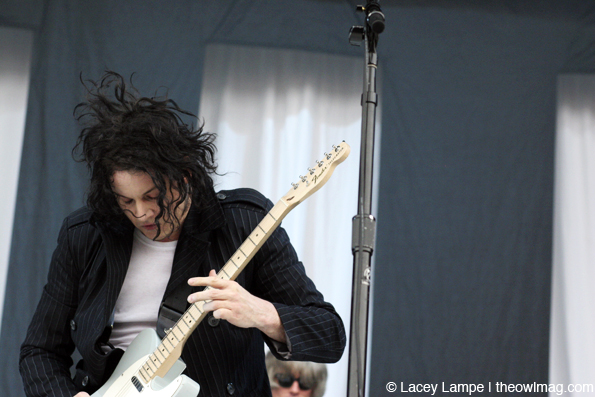 After saying goodbye to the Panhandle, this Owl made her way to the main stage for Jack White. One immediate realization that came from watching this set was that we may kinda deserve to be shot in the face for not being royally stoked about it beforehand. Jack White, as an artist, has always been somewhat of a tease for us. Half of his projects have almost had us at hello, but were just lacking that extra explosive something that kept this Owl from coming back for more. Such is the case with his solo material and we figured his solo show would be decent, but nothing special.

We officially eat our words. White and company absolutely killed it with his solo stuff and even brought it home with revisited versions of songs from The White Stripes and The Dead Weather. We did however hold out hope that since The Kills were in town Alison Mosshart would make an appearance and of course she didn’t. That was literally the only thing wrong with this set and is hardly a complaint.

The last day of Outside Lands has come and gone, and one of our favorite things to see in our Facebook feeds to mollify our music hangover is all the folks rediscovering Stevie Wonder. 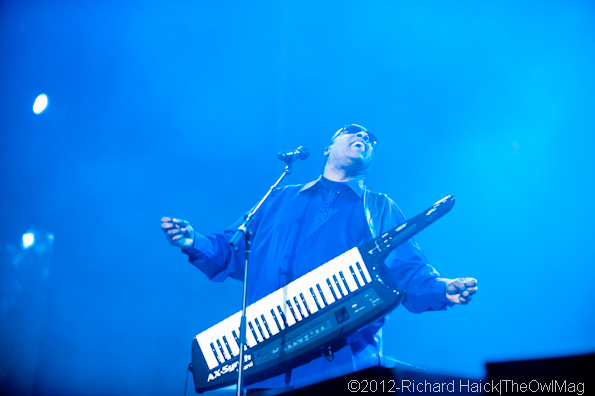 The man Wonder took us to his own church of love and movement at Land’s End stage, launching in to nearly two hours of his catalog as well as a tributes to John Lennon (“Imagine”) and Michael Jackson (“The Way You Make Me Feel”). His pitch-perfect rendition of that M.J. favorite made us want to never see anyone else tribute the King of Pop.

As Wonder told us before he began his set, “Bring the world together, no matter what color you are, because I’m not looking at any one of you!” We danced late into the night to classic hits like “Signed, Sealed, Delivered (I’m Yours),” and the song everyone was ready to pal up and sing to each other, “Isn’t She Lovely?” Wonder sounds like his voice hasn’t aged a year since he was a teenage sensation. Our favorite? “Sir Duke.”

Ah, Outside Lands, please don’t ever change. Well, except maybe the quarter mile line to enter. We’re okay with changing that.