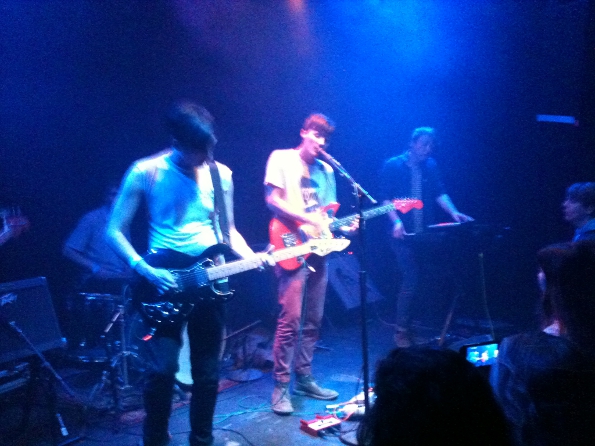 Atlanta’s own Lockett Pundt and his crew stopped by the Bay to showcase songs from their latest release, the compelling and driving Spooky Action At a Distance. Pundt is better known as the lead guitarist for Deerhunter, but with Spooky he is clearly carving out his own voice, and stepping into the spotlight, and seems comfortable with it.

Pudt has been known as the reserved wallflower of Deerhunter, although with the last two records he has stepped up to lead vocals, most notably on “Desire Lines” and “Fountain Stairs” from Halcyon Digest. Bradford Cox in all of his glory can be a bit distracting and overwhelming, and his solo gig Atlas Sound consistently delivers some excellent and often suprising excperimental music, but it doesn’t sound like the sonic sprawl of Deerhunter (which speaks to my soul).

Lotus Plaza by contrast is a direct extension of Deerhunter, and delivers some evidence that Lockett may be the architect of Deerhunter‘s sound more than anyone else. Sporting a surfer cut from the ’80s, Pundt and the boys extended out the tracks from Spooky and had the crowd bobbing their heads in a hazy unison, and prompted a breakout dance party at certain points. Pundt’s voice sounds like Lou Reed in a good way, and the guitar work was excellent, especially on “Strangers,” and “White Galactic One.” The set was short and sweet, and when the crowd pleaded for more, Lockett responded, “Sorry, we only know nine songs together.” A fun confession, and a very satisfying show.