Live Review: The Warlocks at Independent 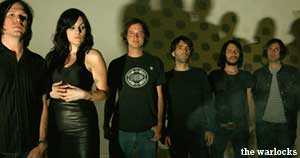 The Warlocks and The Black Angels tour kicked off in San Francisco at the Independent as the aroma of smoke and psychedelic music filled the air.

The Warlocks, considered to be the modern-day version of Spacemen 3, somehow found themselves as the openers of the show although the band has been around longer than The Black Angels and have more releases to date. The band recently slimmed its lineup down and lost a couple of members, including one of their two drummers, however, the lineup changes did not affect their performance. Frontman Bobby Hecksher, sounded phenomenal as usual as he stalked the microphone with his vocals while the rest of the band played tightly behind him. The set-list started with newer tunes and the last half showcased a lot of the band’s older druggie songs such as “Shake the Dope Out,” “The Dope Feels Good” and “Cocaine Blues.” Fortunately, those with an addictive personality in the audience could get away with their cigarette cravings.

The Black Angels, from Austin, TX, lead the way for the rest of the show and were in no way as tight as The Warlocks. They did play a variety of strange instruments, which was cool. Frontman Alex Maas resembled a grizzly bear with his thick, itchy looking beard, at times shaking a maraca. They played a lot of tracks off their first album Passover (2006) including “Black Grease” and “Manipulation.” Unfortunately, drummer Stephanie Bailey (Nico anyone?) seemed to get lost in the percussion. Apparently the rest of the band discovered this, as a couple of the fellows replaced her during different songs (why didn’t they stay?) while she pretended to play the bass. The band also played a lot of material from their current album, Directions to See a Ghost, which doesn’t compare to the melodic Passover.

The strobe light reached a particular high point at the end of the show, giving the drunks a good case of the dizzies and just in time to wake up the indie kids who were nodding their heads and looking down with particular excitement. It was truly a shoegazing-ly good time. 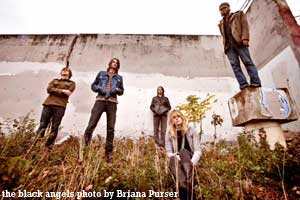