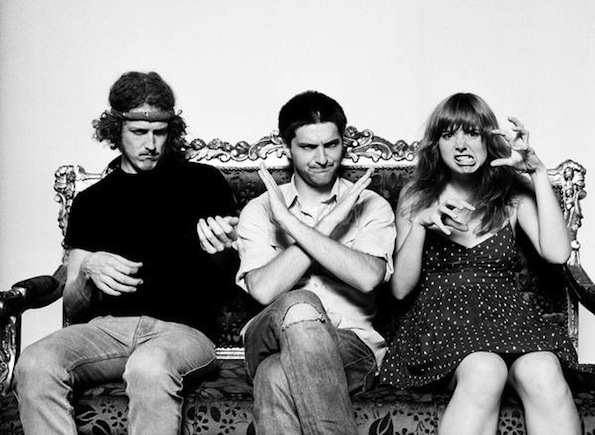 The Spring Standards brought a breath of fresh air to a balmy Monday night in San Diego. The Soda Bar was certainly lacking in capacity, but this wasn’t going to stop the quartet from bringing their best to the stage.

The folk goodness of the evening oozed out onto the grittiness El Cajon Blvd, typically known for its occasional street walkers. The band even referenced the eclectic area in their usual friendly banter with the audience. “If I had a dollar for every time I whored myself out, I’d have $3.50,” James Cleare joked. “I’ll explain the fifty cents later.”

Cleare along with Heather Robb and James Smith, started the set singing “Helplessly Hoping” by Crosby, Stills & Nash into one microphone at center stage. It was fitting as the crowd had been prepped by what sounded like the CSN Pandora station throughout the evening. This bit of harmonizing was just the tip of the iceberg from these Brooklyn musicians who are so in sync, it’s like they came out of a musical womb together.

They made us happy with a lot of material off their recent double-disc record, Yellow//Gold, which is chock full of blissful tunes and lovely harmonies, like “Only Skin” and “Crushing Pennies.” The energetic “Here We Go” got a good “YEAH!” from a couple eager spectators. They also kicked in some older favorites like “Queen of the Lot” and “Hush.” There were some sound and technical issues, but they fared through them in true showmanship style.

Tour manager, Noah Goldman, joins the fun during live shows to play pedal steel and electric guitar. He’s usually in back, swaying energetically and contributing to the band’s boundless energy. The beats come from a drum kit that is split between Robb, Smith, and Cleare, and is something that they’ve become known for. Smith and Cleare frequently trade places and instruments while Robb remains behind her keyboard, glockenspiel, melodica, and drums.

Their professionalism and endless love of their craft pours out of them as they move organically from instrument to instrument. In a small bar in the mid city section of San Diego, it is so nice to be reminded that this still exists.

**Editor’s Note: The Owl Mag’s photographer for this show was unable to attend. Please excuse our photo-less post.