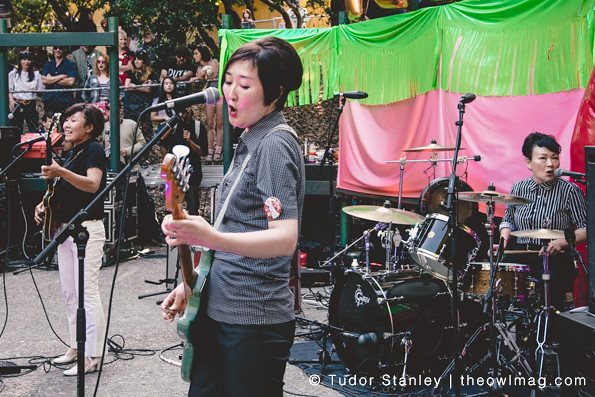 Burger Records knows how to throw a party. It’s not every day that the punks and misfits of the world get together in the name of music, and Mosswood Park was righteous and ready for the revelers. The two stages, Flesh Land (the main stage) and Psychoville, were perfectly dispersed, and the beer gardens were also within earshot and provided some, at times, much needed shade and plenty of PBR. What a perfect way to spend the 4th of July. 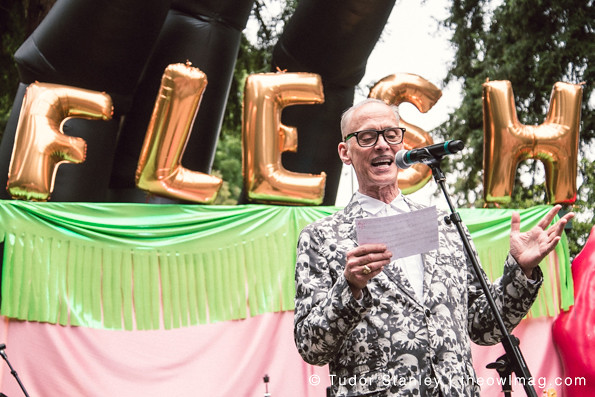 John Waters, aka the master of ceremonies, said it best, “Punk rock never goes out of style,” but before the renowned-by-punks-everywhere film writer/director made his way to the Flesh Land stage, the all-female, power trio, Bombón, grabbed the sunlight and started day one out perfectly. Two instrumental, surf rock songs into their set, the Bombón guitarist, Angela, told the small, but completely amped, crowd, “We’re going to sing now,” and then delighted us with “Oh Baby” and kept right on singing. 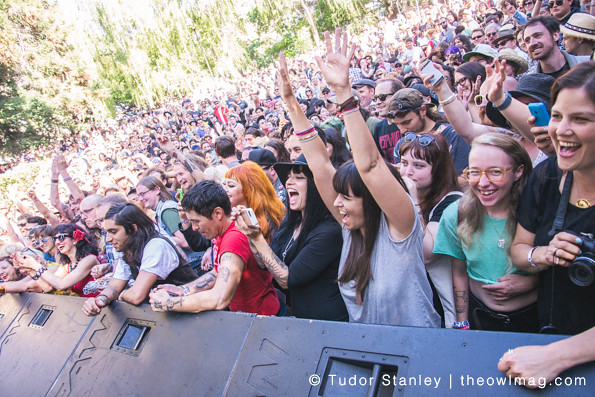 Toward the end of Bombón’s set, Danny & The Darleans popped the Psychoville stage’s cherry and the crowd came to bask in the glory. With a voice like Mick Jagger, Danny of Danny and the Darleans got the crowd riled up and ready for the remainder of the day. They devoured 70’s rock-n-roll and vomited it into the raw punk rock pool in which everyone swam throughout their playlist. 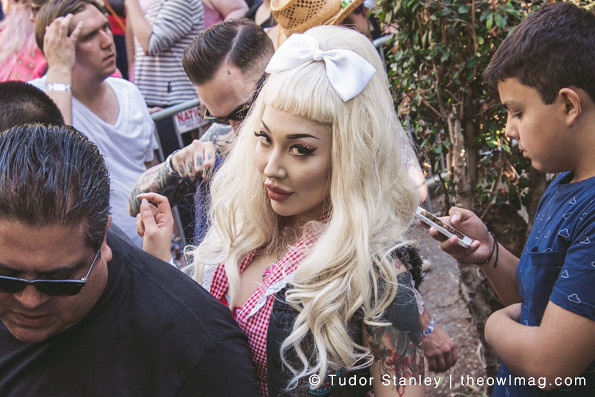 The highly anticipated moment of the day, John Waters taking the main stage as emcee of Burger Boogaloo, finally arrived. With his pencil-thin moustache and a stack of note cards in his hand, John Waters and his sinfully exquisite wit walked onto the Flesh Land stage to cheers of appreciation for helping to make everyone of us who we are today. He immediately reminded us of why we were at Burger Boogaloo. “We’re here to remember the first time we sniffed glue, our first rim job, ladies, the first time you puked in your pocketbook…” and the list went on extraordinarily. He wasn’t there to just spout truisms about punk rock, the culture, and the fans; he was also there to introduce the bands. 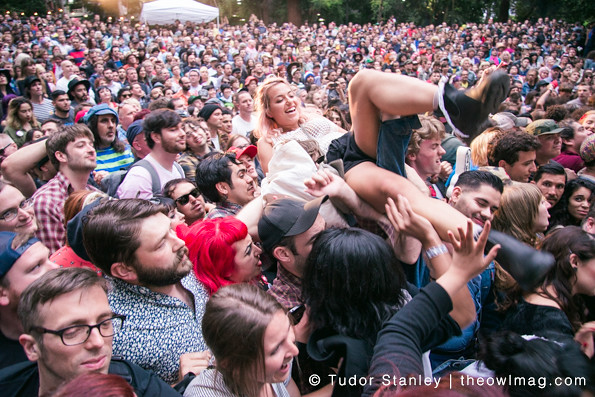 John Waters introduced The Trouble Makers by saying something remotely sarcastic about their lackluster technique, but then followed that up by saying, “Technique is nothing more than bad style. “ In true punk rock fashion, the middle-aged members of The Trouble Makers played a brilliant set through multiple equipment failures, but nothing could stop The Trouble Makers. Saturday of Burger Boogaloo quickly became Burger Records’ throwback to the garage punk days of past. The Legendary Stardust Cowboy roped in the aging fans as he served up a big ass belt buckle full of psychobilly and insanity. “Old chickens make good soup,” quipped John Waters after the legend left the stage. Not to be unmatched, the French duo, Magnetix, killed it on the Psychoville stage and Untamed Youth kicked out their 80’s garage rock in full force. 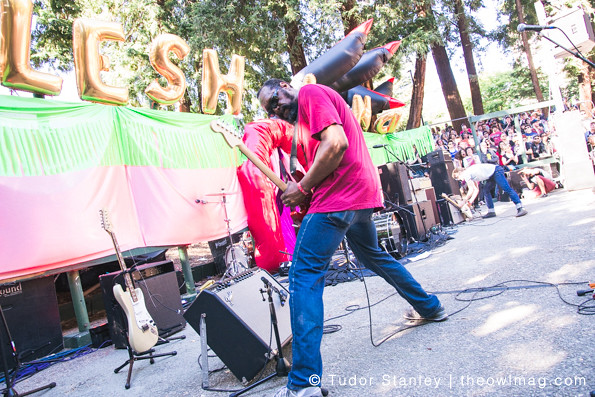 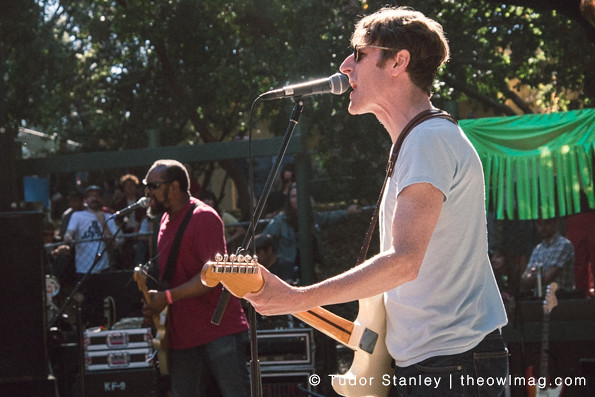 80’s garage punk rockers, The Gories, grabbed Flesh Land and everyone held on tight through their stellar set. As the lead singer jokingly spouted off, “We’re more punk than The fucking Mummies,” fans thrashed around, elated to see the band that “put a spell on” John Waters back in the day. Speaking of 80’s garage punk, The Pandoras captivated the crowd with their killer looks and collective smiles. (They were really happy to be there.) 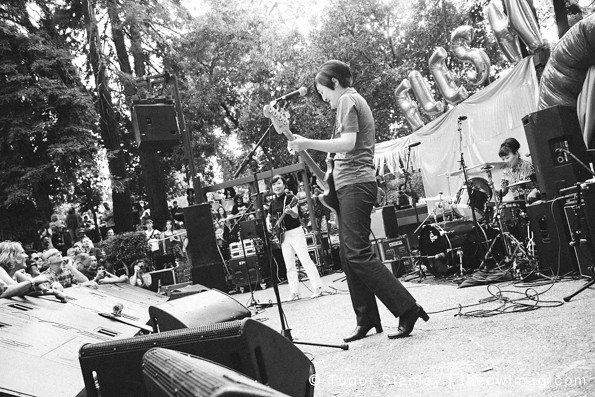 Would it be right to say that Saturday’s punk rock extravaganza placed three very different but definitely all titans of the Burger Records’ scene at the end of the bill? The 5, 6, 7, 8’s set on the Flesh Land stage definitely warranted a “yes.” Their performance of “Woo Hoo,” best known as the song they played in the “club” in Tokyo in Tarantino’s Kill Bill Vol. 1, was enough to get everyone on their feet, shimmying and shaking. 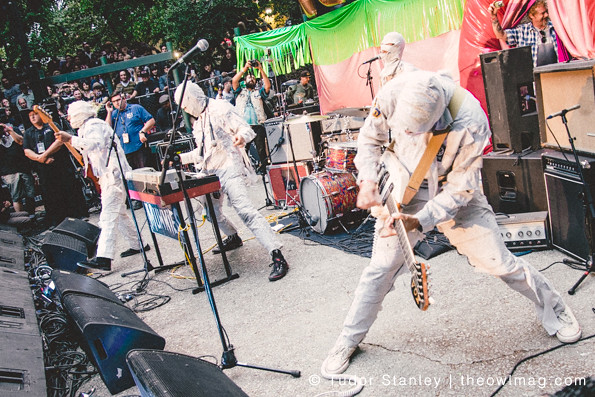 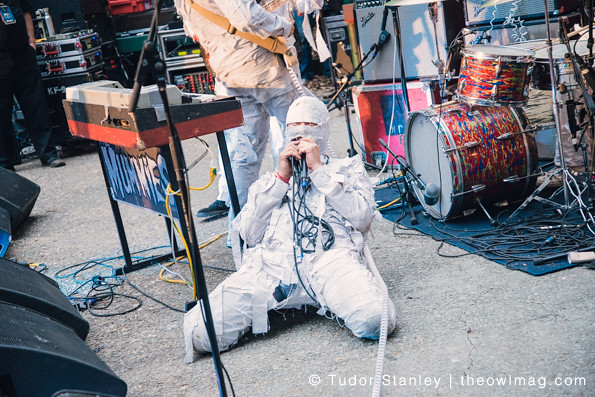 Burger Boogaloo wouldn’t be Burger Boogaloo without an appearance by Shannon and The Clams. John Waters claimed he “saw them in a wet dream,” and I don’t think anyone in the audience doubted him one bit and some may have even reciprocated during Shannon’s set. But of course, it was The Mummies in all their raunchy, mini-motorcycle riding glory that took the spotlight, enamored fans, and turned it up to 11. Headlining a day full of fabulous freaks and punk rockers isn’t an easy task, but The Mummies ripped through their set list and sent everyone back out into the wild to enjoy freedom, fireworks, and the Boogaloo after-shows. What a day to never forget.