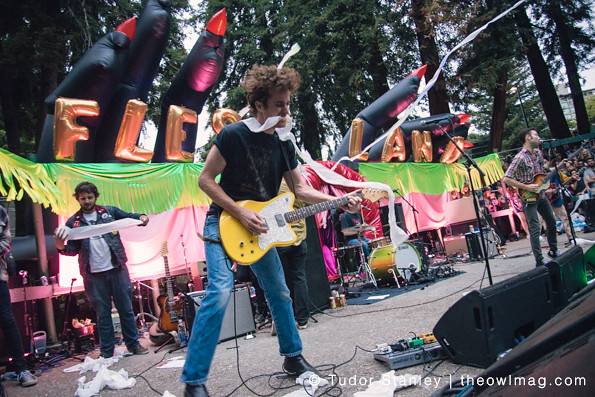 The inflated black fingers with lust red nail polish that loomed over the Flesh Land stage on Saturday seemed to be dancing on Sunday morning. Even the vaginal opening that birthed bands onto the stage throughout the weekend seemed to have a certain glow…musta been The Mummies from the night before. Starting Sunday off with Vial and then Gooch Palms following them on the Psychoville stage and reflecting on what it’s like to be an American in the current state of the union was absolutely spiritual in the punk rock sense. “I can marry a dude and shoot a gun.” 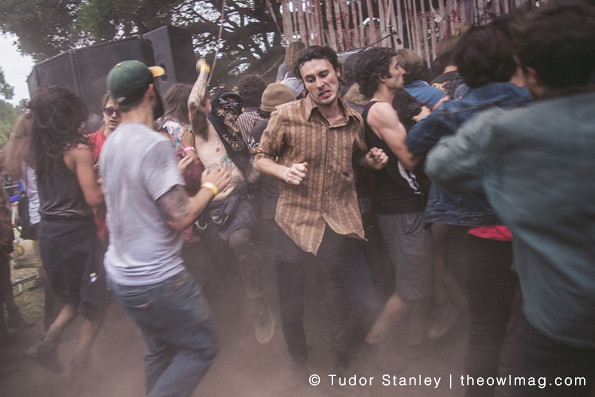 Not be outdone, Sneaky Pinks unleashed their kick-ya-in-the-crotch, art punk to an already enthusiastic crowd. Everyone knows that the party really starts when the one dude in the band plays in his underwear, well, the party definitely started then. Justin kept it ragin’ when he set an American flag on fire and waved it around while wailing the lyrics to “(We’re the) Punkies”. 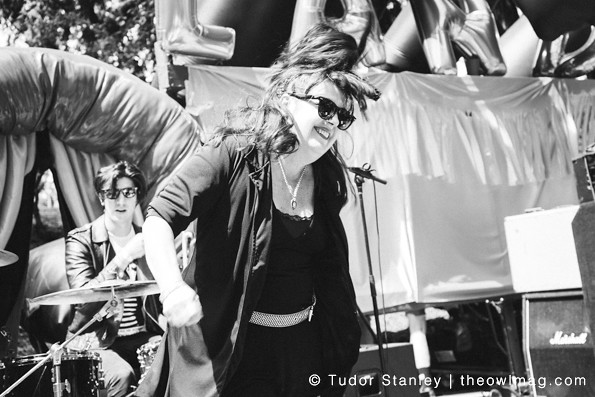 Before Nikki Corvette and her supporting band Prima Donna stepped onto the stage, John Waters provided a memorable introduction. “She ran away from home when she was a teen in Detroit because her parents wouldn’t let her go see the MC5. No wonder, that’s child abuse.” He went on to say how Nikki & the Corvettes album from 1980 is still said to be “launching teenage boners”. Nikki’s definitely still got it. After kicking out a few classics, she covered “It Don’t Come Easy” by Ringo Starr, and then went into a rambunctious rendition of “You Make Me Crazy” – a song we can all relate to on one level or another. 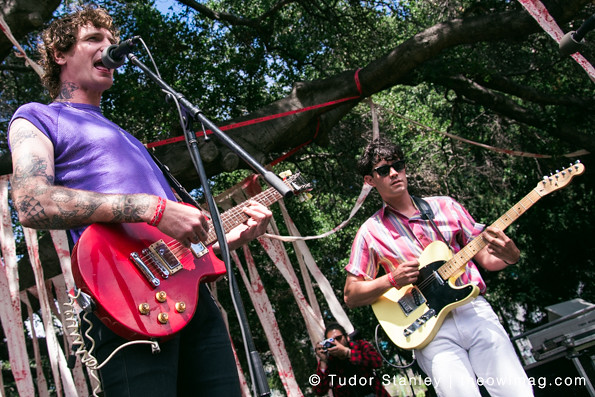 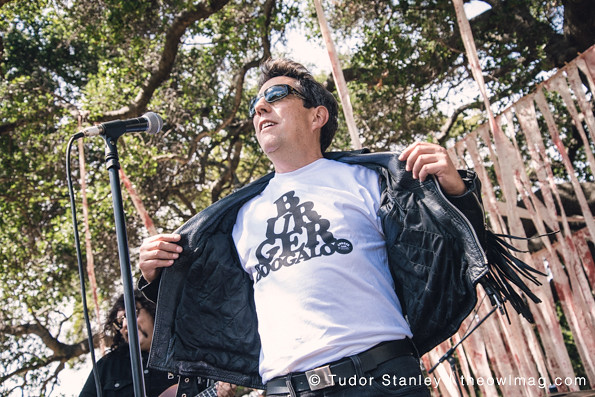 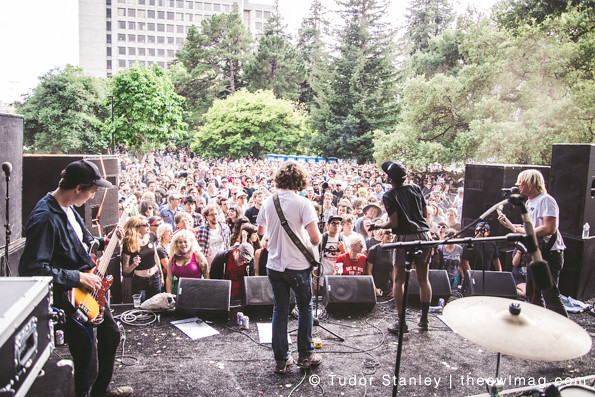 John Waters had some choice words to describe Guantanamo Baywatch. “Trampy, slimy,” and something about sounding like going to the beach on a day you shouldn’t be bare foot. Seems like a wonderfully fair description of a band that feeds off displeasure as much as they do the hoots and hollers of their incredible fans. Guantanamo Baywatch put on a truly unforgettable performance, and it was only 4 PM. 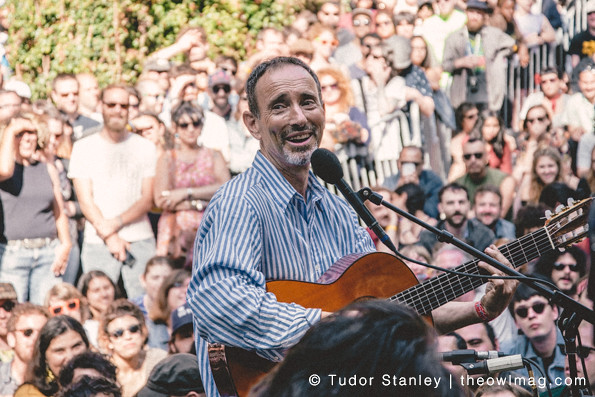 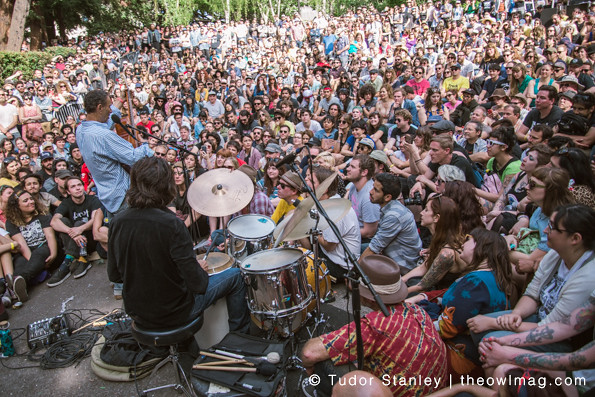 Remaining at the Flesh Land stage on Sunday was an easy task, especially when the righteous and revered Jonathan Richman is coming up. John Waters talked of touring with Richman, and the humility that surrounds the man who according to Waters is “150% famous.” Jonathan Richman set himself and his drummer up in front of the stage with enough room for people to sit all the way around them as they played for us. Everything about Richman emanates peace and tranquility, even the way he holds and plays his guitar. Dancing throughout his set and singing truths to an enamored crowd of newcomers and old-timers was quite the sight. Everything little thing was all right. 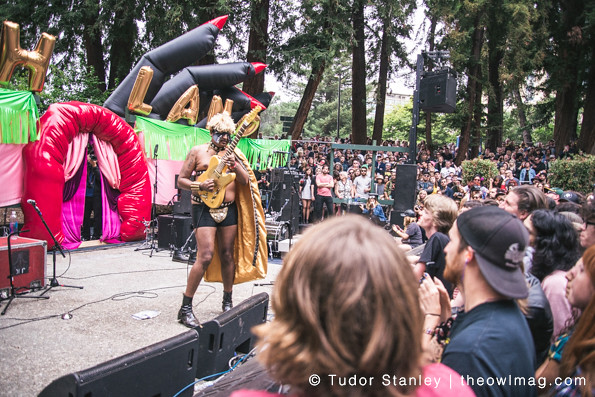 Only at Burger Boogaloo can the peacefulness and joy brought on by Jonathan Richman be bombarded by the bombastic King Khan and the BBQ Show and no one bats an eye, instead they begin stage diving. King Khan was in full form and, of course, didn’t hold anything back. John Waters described them as confrontational and wild, and he couldn’t have been more correct. 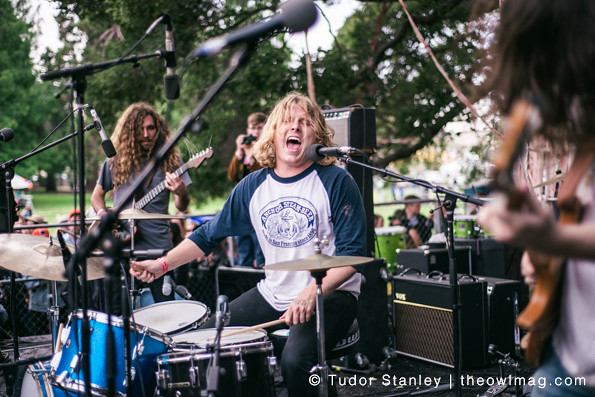 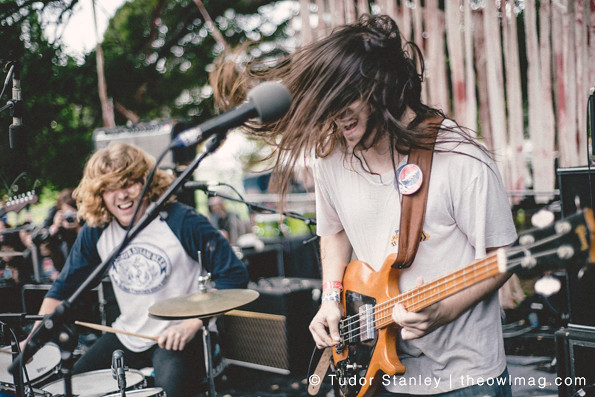 Fuzz really needs no introduction. As soon as Ty Segall sits down at his drum kit everyone knows exactly what they’re in for and they better hold on tight. Fuzz’s face-melting, psychedelic rock created a crowd of moshing maniacs, which seemed fitting for the Psychoville stage. At one point and time, Ty demanded, “I want to see a fucking pit for this next song,” and fans did not let him down. The three-man crew kept the crowd insanely stoked throughout the set, and Ty kept the hits coming when he yelled out, “Aliens aren’t rapists , so fuck you, Donald Trump.” 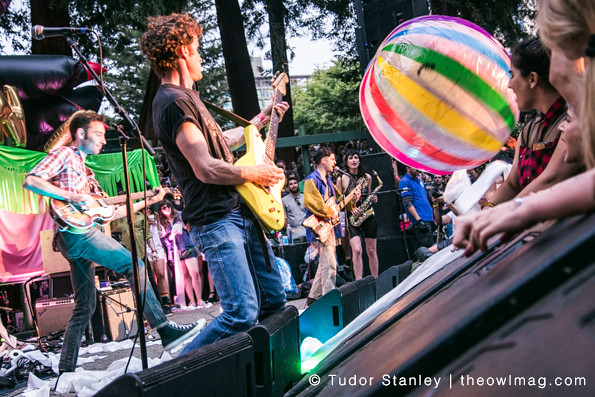 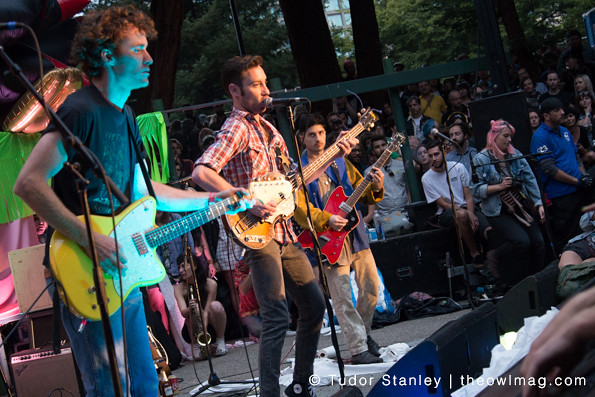 How do you end a day full of so much punk rock excellence? By bringing on the fearless foursome from Atlanta, GA, Black Lips, who started their set by throwing toilet paper rolls and beach balls into the crowd, and the crowd rejoiced. Black Lips hit a crowd demographic that hadn’t been tapped into, entirely, throughout the weekend. That group of garage rock fans, who jumped head first into the genre at the end of the 90’s and early 2000’s, loved every minute of it. Burger Records went above and beyond with this year’s lineup. The Owl Mag can’t wait to be back next year! 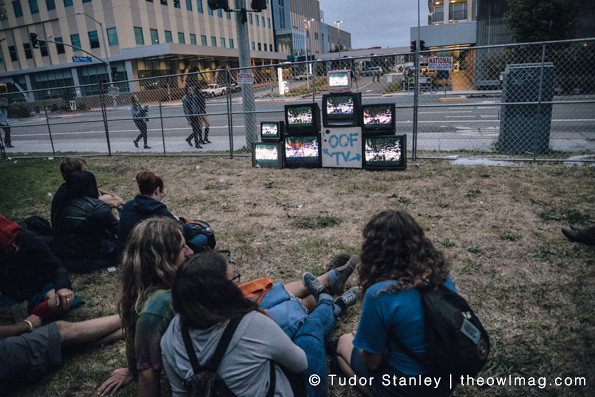 Check out more photos from Sunday.