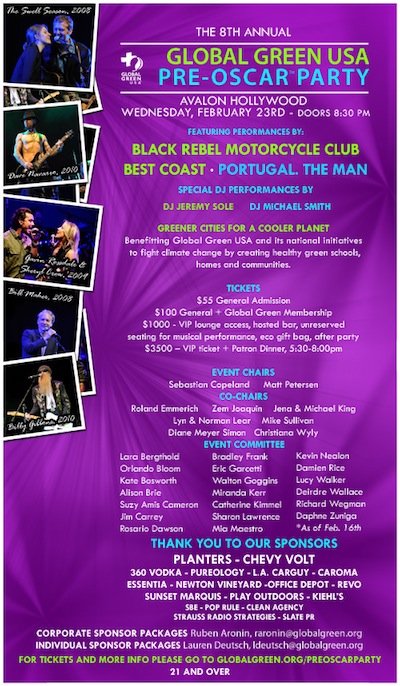 It’s that time of year again here in Hollywood-town when high traffic intersections get blocked off causing the blood pressure and road rage levels of locals to increase at a rate comparable to that of celebrity sightings: it’s almost Oscar Weekend!

And in advance of the 83rd Academy Awards wasÂ Global Green USA’s 8th Annual Pre-Oscar Party at the Avalon where the greenest celebrities gathered to mingle, drink (organic cocktails), and support the cause to keep the world from imploding upon itself, and rock to the tunes supplied by the bands of the eve: Best Coast, Portugal. The Man, and Black Rebel Motorcycle Club.

Oh Best Coast, SoCal buzz band full of sunshine, what do I think of you? Let’s review tweet by tweet, shall we:

* Seriously I think a 12-year old could do what this drummer chick in Best Coast is doing.

* Can anyone tell one Best Coast song from another? If you can I’ll give you $5.

* Pissed off now. For 5 seconds they tricked us into thinking they were doing something different, but nope. Same song they played 15 mins ago.

*Buzz is overrated. It usually is. Moving on.

None to soon, Alaska’s own prog/stoner-rock specialists with a natural affinity for the environment, Portugal. The Man, stepped up and alleviated my musical annoyance but quick. Opening with a tripped-out, groove stepping, fuzz heavy “My Mind,” PTM made fast work of moving the crowd from amateur hour to a professional rock show. Seven songs that felt like 12 (their penchant for the jam may get lost on some, but not on me), PTM’s set was lockjaw tight and a block of instruction in the art of musicianship and inspiration.

Of course, headlining the night was LA’s own Black Rebel Motorcycle Club. I tweeted that after PTM, BRMC had better bring their A game, which was like telling chocolate that it had better be tasty. BRMC always bring their game to a show and have true care for all things environmental, so it would be easy to say that the crowd (celebs and average fans alike) was appropriately rocked by the trio’s blaringly loud and dense distortion, Leah Shapiro’s solid rhythms, Robert Been’s bass thicker than oil sludge, and Peter Hayes’ guitar wickedness.

And they played “Hi/Lo.” Not kidding.