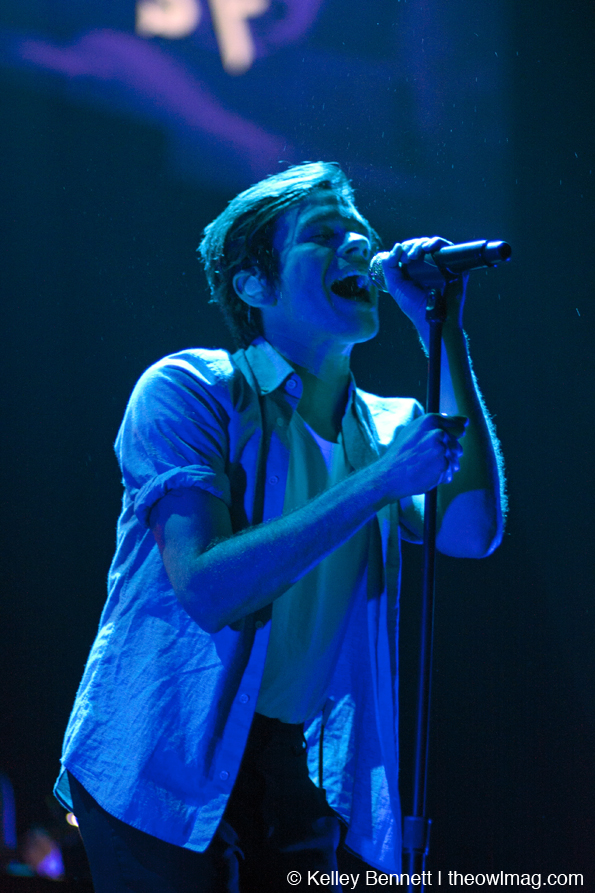 As Fun. took the stage at the Masonic Center, over 75% of the audience pulled out their phones. It should have been expected—the core trio, fronted by dreamy-eyed mega-tenor Nate Ruess, are quickly approaching pop idolatry status, and this show came as something of a surprise for local San Franciscans. The last stop for Yahoo!’s On the Road concert series before departing to Europe, Fun. (who was originally scheduled to play with support from The Neighbourhood) played a free show for all who were lucky enough to nab a ticket by completing a task using one of Yahoo!’s new apps. Opening with Some Nights “Out On The Town”—an odd choice for a starter as it was a bonus track —Fun. made it clear this would not be an unimaginative or self-soothing set. Nor would it be sloppy or disheveled. Fun.’s (and especially Ruess’) character and style is defined by a clean, polished enthusiasm—as is their music. But Ruess’ untied shoestring, a tiny hazard and the single uncouth detail of Fun.’s Friday night set, made for an accidental and ironic innuendo to a rebellious underpinning—the wild shoestring as a discreet symbol of defiance against the muffling, constricting responsibility of adulthood. Though this was a free show technically, specifically for those supporters of Yahoo!, this set staunchly rivaled their 2012 Outside Lands performance—and even despite that it was a far more intimate an audience, the performance rallied just the same.

Ruess (whose voice is as always, absolutely incredible,) bounced around, catering to the beckonings of the gaga-eyed fans clinging to the stage’s perimeter. By the seventh song—“Barlights” from 2010’s Aim & Ignite—the crowd reverted into full-on sing-a-long mode. That is, until pink v-necked guitarist Jack Antonoff decided to duel with the drummer, Andrew Dost, to battle Ruess’ audacious vocal liberties over the audience’s chorus-singing.

When “Carry On” began, Ruess mixed his own voice for the live track, and afterwards declared with a grin, “We feel like a high school band that is just killing it.”

Following the anthemic “We Are Young” (accompanied by a Mia Farrow/fairy hybrid on acoustic guitar), Fun. covered the always-relevant “You Can’t Always Get What You Want”—Ruess, a natural Jagger in his perpetual, mischievous coolness, again encouraged the audience to join in. Quickly exiting shortly after their cover, Fun. returned for an encore to play “Some Nights”—the other crowd favorite—and by this point the whole audience was standing and singing along.

Ruess’ shoestring was still untied when Fun. finished. Against a more mature button-down chambray shirt, it seemed an unconscious nod to those imperfections and unruly qualities that define youth. Fun. holds on tight to those details—it defines them—and Friday’s show put them reveling in that all-too-familiar space between the recklessness of adolescence and the self-restraint of adulthood. We were right there with them.

To check out more awesome photos of the show, go HERE.