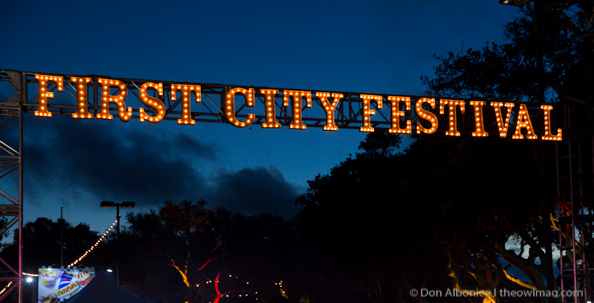 As the sun shone over the Monterey County Fairgrounds on day two of the First City Festival, fans seemed to congregate more quickly than on day one. Whether it was due to the wonderful weather, incredible lineup, or the carnival rides and cotton candy, doesn’t really matter, but as a fan of live music, it was great to see so many fellow fans there to kick off Sunday’s festivities. Bleached started off Sunday with a bang, not a whimper. The LA-based post-punk band, featuring sisters Jennifer and Jessica Clavin, cranked it up to full volume on the Cypress Stage and gave Mother Nature a reason to wear ear plugs. Even with their punk rock persona, they were still cordial enough to jokingly say, “thank you to all the golfers who came to watch us today,” before ending their set with a killer version of “When I Was Yours.” FYI: There’s a golf course within spitting distance of the Cypress Stage at the Monterey County Fairgrounds. What would a festival held on fairgrounds be without scoping out the carnival rides and games? After contemplating what game to play and ride to ride, the classics stood out and the following choices were made – throwing darts at balloons and riding the swings. Fun was had by all, but of course, no ride or game could match the intrigue of the people watching. Even though it was hard to pass up Capital Cities busting a move on The Cypress Stage, Dr. Dog did not disappoint when they took over the Redwood Stage on Sunday afternoon. In support of their new album, B-Room, the East Coasters based in Philly, PA got their jam on with a crowd of fans ready for anything. Every song seemed to be a crowd favorite, including “That Old Black Hole,” “Stranger,” and “Heart It Races” (Architecture in Helsinki cover). Speaking of fans being ready for anything, bassist Toby Leaman jumped off the stage during their final song, “Lonesome,” and rocked out with the crowd who were in no hurry to go anywhere. Lucero means bright star, and when the eight dudes from Memphis in the rock ‘n roll band of the same name started to play, everything became a bit brighter. Lead singer and guitarist, Ben Nichols, joked that he would normally just be waking up when their set started on late Sunday afternoon, but Lucero didn’t seem the least bit tired. In fact, after asking if they served whiskey at the festival to resounding “yeses” from the audience, Nichols and company belted out a wicked rendition of “Women & Work.” The Memphisian country rock didn’t stop there; they played their entire new EP and left the crowd contemplating after ending their set with “The War,” which is dedicated to Nichols’ grandfather. Neko Case began playing as the sun was setting behind the Redwood Stage, and after a couple songs, she looked out at the scenery and said, “what a sexy environment you live in.” After that proclamation, she and her band played a few songs from her upcoming album, The Worse Things Get, The Harder I Fight, The Harder I Fight, The More I Love You, and she, of course, kept the crowd wrapped around her every word while sharing songs from her past albums as well. Dubbing “Lion’s Jaw” a makeout song, dedicating “That Teenage Feeling” to Paul Rigby, the band’s guitarist, who could not be there due to his recently born baby, and being in awe of the airplanes that kept flying overhead were just a few of the highlights and antics of Neko’s set. Finishing her performance with “I Wish I Was the Moon” was the perfect way to end a weekend of phenomenal music surrounded by an amazing crowd at one of California’s quintessential outdoor venues. Let’s all hope First City Festival lives on forever.