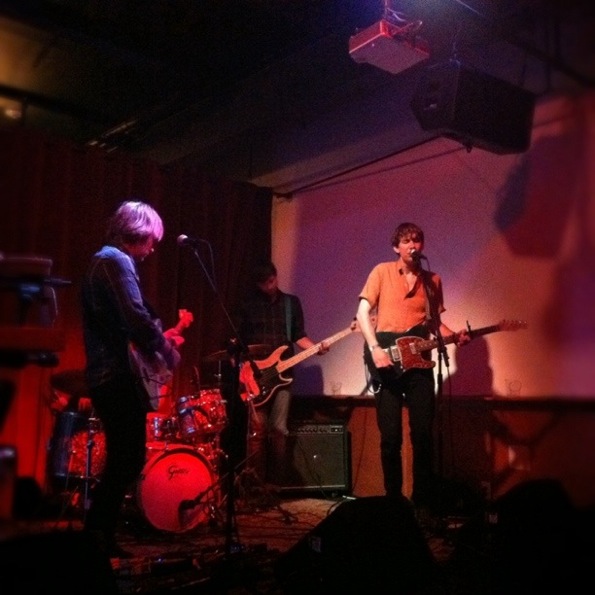 Though out of town bands may be a little indifferent about playing a weeknight show in Sacramento, I love going to shows at small venues with only a few dozen people in attendance. It makes me feel like I am privileged to be “in the know” about a gem of a band that others have no clue about (how elitist of me). Los Angeles-based Devon Williams rolled through town in his mini van with his four bandmates in tow touring for his recently released album, Euphoria. Devon Williams shared the bill with Slumberland Records label mates Terry Malts, a three-piece punk influenced outfit from San Francisco. While I only caught the tail end of Terry Malts' set, it was just long enough for the trio to briefly puncture my ear drums with their piercing guitar riffs and heavy drums. A stark contrast to

the softer and much less frantic feeling of Devon Williams. He has been described as performing “shimmering pop music that tempers sweetness and bliss with an honest, unguarded perspective,” which is an astutely accurate description, at least from what I witnessed in his performance. There is a complete absence of pretension in the songwriting and creative metaphors are nowhere to be found. He sings only what he means and means only what he sings.

There is a quiet, yet awkward charm about Devon Williams' demeanor and as he lulls you into wonderment, it feels as though he is singing to you straight out of the pages of his journal. “Sufferer” showcased his sweet and, at times, lamenting lyrics (“shed your fear, and I will share mine / a brutal truth / a sufferer's proof”) and hints of '90s britpop infused in some of the arrangements where quick bursting strums on the guitar create ear singing sounds reminiscent of The Stone Roses. Devon Williams is a gem well worth getting “in the know” about now. Doing so can only elevate your musical street cred. Catch Devon Williams at the Echo in Los Angeles on October 21st. Euphoria is out now on Slumberland Records.