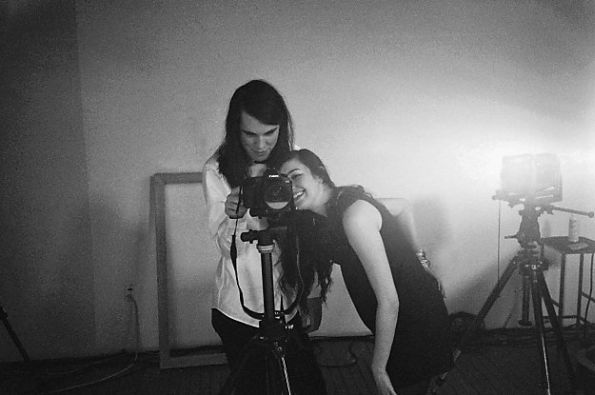 There’s no such thing as a free lunch…or is there? The Los Angeles-based IAMSOUND Records teamed up with the ultra-swanky Clift Hotel for the return of the Clift Sessions, a free summer concert series showcasing some notable names in the indie world. Over a thousand people submitted an online RSVP for Sunday evening’s show featuring Brian Oblivion and Madeline Follin, a pair of fresh faced darlings better known as Cults.

Though the band was not expected to take the stage until 10 o’clock, a steady stream of people began trickling in three hours before to ensure their spot at the first-come-first-served show. By 9 o’clock, the scenesters outnumbered the European tourists who donned quizzical expressions as they became enveloped in a sea of plaid and practically trampled when the doors to the Velvet Room were thrust open.

Twenty minutes after 10 o’clock, the pair took the stage with their sweet voices and long brunette locks. As soon as Madeline uttered, “I knew right then that I’d been abducted,” Cults‘ devoted followers were entranced by her crisp vocals. There is an endearing je ne sais quoi about Brian and Madeline emanating their inexplicable ability to conjure up lost feelings of puppy love buried deep within.

The emotions their performance evoked felt vaguely familiar and made me feel like shyly kicking rocks down the sidewalk next to my childhood crush. Their songwriting is simple, but the actual content connotes a deeper back story fraught with complexity. The perfect example was the performance of “Bumper” which aptly melded all of these components together. The airy repetitive chords on the keyboard personified that sense of innocence, but the lyrical “he said she said” between Brian and Madeline revealed a more mature dialog that a love-struck child would struggle to understand.

It was clear from the crowd’s reaction inside the Velvet Room and the line of hopeful attendees waiting outside the Clift Hotel that Cults strikes an emotional chord in people that resonates close to home.

Watch Cults‘ video for “Go Outside”

Go Outside, by Cults from Boing Boing on Vimeo.