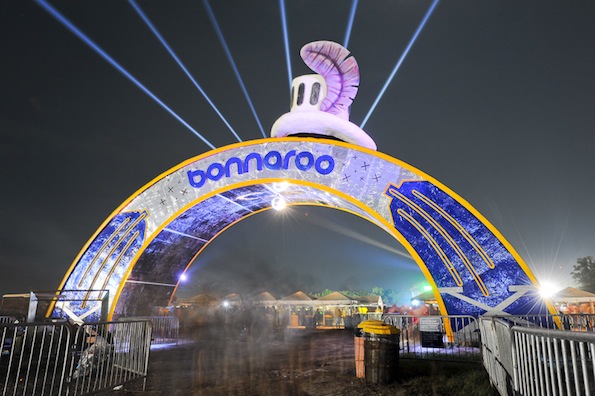 The night sky is small over San Francisco, but in late June it’s enormous over a 700-acre farm in Manchester, Tennessee. The 10th annual Bonnaroo set off under the stars, heat, and dust to please about 100,000 attendees only proving that the fest is getting more and more credible and extravagant as the years go by. 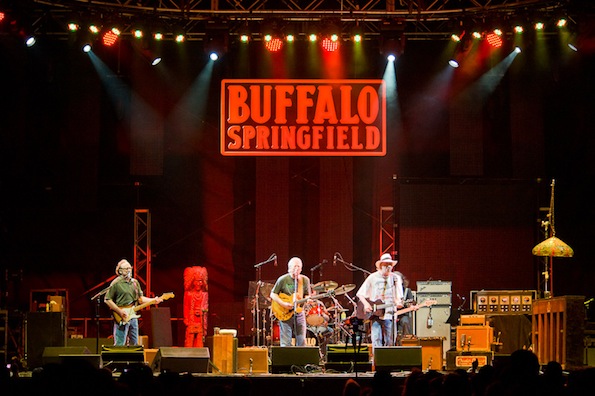 There are few bands where you know every lyric to because your parents knew every lyric. Buffalo Springfield played hit upon hit Saturday night to a crowd ranging from age 4 to 60 without missing a beat. “We’re from the past,” Neil Young stated as he introduced the group to an audience full of people who were on all ends of the spectrum – from being there before they broke up to the confused “is this song from that one commercial” kids who by the end of the set were made new fans. There’s something incredibly humbling about seeing revolutionary, iconic American musicians play in front of you, especially ones that are so refreshingly passionate and excited about performing as they were over half a century ago. 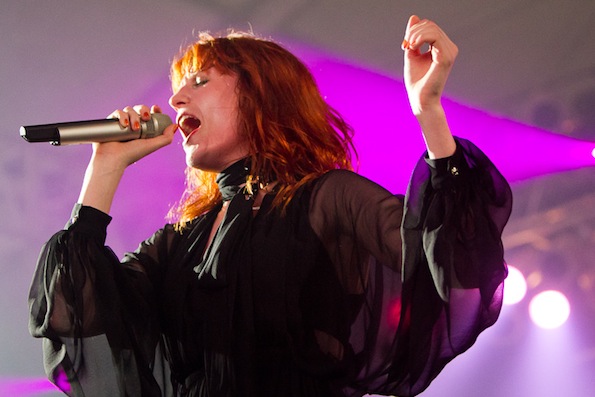 Most Communal Audience: Florence + the Machine

Seeing Florence + The Machine is unlike seeing most bands – it’s more of an experience than anything. The songs provide an instant intermutual love between fans, who were dancing and singing along even though they were on the other side of the wall and couldn’t see a thing. The flawless ethereal performance featured all Florence Welch’s best work and even featured a brand new song off the upcoming new album, Strangeness and Charm.

Playing the smallest stage in the most out of the way tent, Infantree proved that no matter the circumstances they will always throw a great show. Signed onto Neil Young’s label and already released and re-released their debut album, Would Work, the young band of sheepish alterna-folk-pop guys are growing at a rapid pace. The tent which was full of people escaping the sun, began to get into the solid set and even provoked an older guy to seat dance while eating a corndog. Infantree combines a soulful funk with their folk rock and evenly combines all of their talents so the band is a whole – no outshining, just an even mesh of remarkable musical dexterity. There’s no doubt that within the next ten years, these guys (who you can also occasionally see on the corner of Third St. in Santa Monica) will be playing one of the bigger stages of the fest to a more attentive audience. 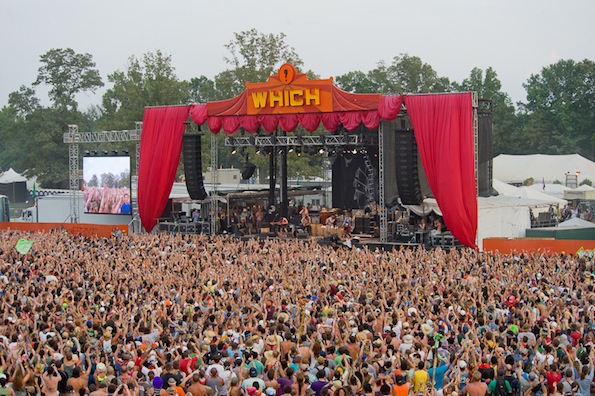 Biggest Turn Out for a Mediocre Set: Mumford and Sons

While the now VH1 over-present band Mumford and Sons played their good, but not great set, it was impossible to get anywhere due to their massive draw that made foot traffic stand still. For what they are, they put on an intriguing live set with banjos and stand up basses, but fell short after the first few songs. 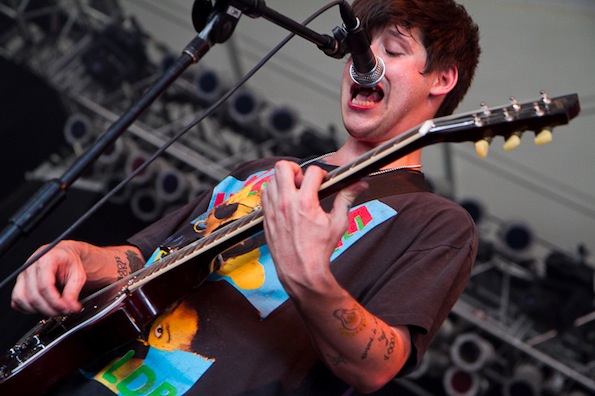 Lounging hippies scattered the grass surrounding the stage Wavves began to play on, clearly only there because not much else was happening so early on in the festival. The band plowed through a high energy set towards your average sweaty snapback clad crowd surfing, beach ball throwing audience who clings to every lyric as if Nathan Williams were their slacker mentality Jesus Christ. The real shocker was that by the time the first verse of “Post Acid” started, all those sleepy hippies were up off the grass and pogo-ing around right next to the super fans. 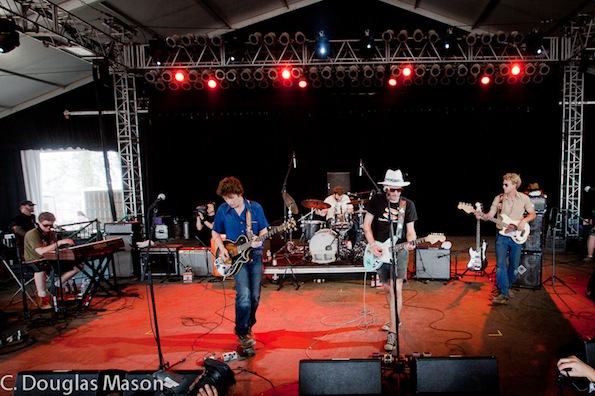 Mad You Missed It: Deer Tick

The worst thing about festies is that you have to make decisions. Unfortunately, the decision between Deer Tick and Lil Wayne was made by most in favor of the latter. Apparently missing the Rhode Islanders play extremely well-executed Nirvana covers made everybody rethink their choices. 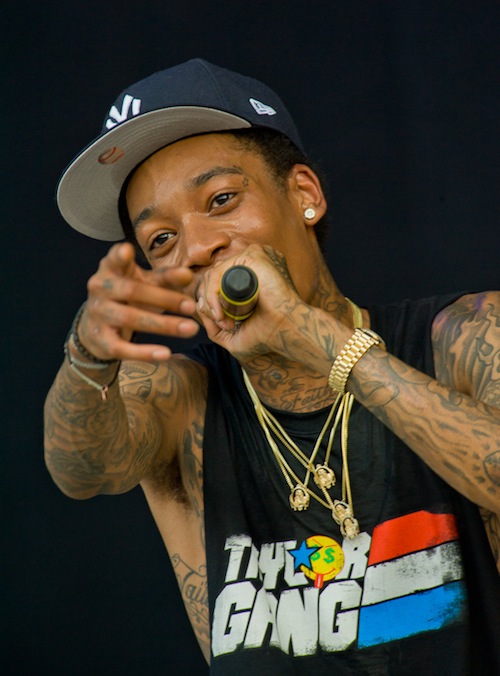 Worst Pickup Line: “Ay- I’d roll up to you, girl,“ while Wiz Khalifa performed “Roll Up” while simultaneously spilling beer on my leg.

Still better than having to listen to his DJ/Crowd warmer guy skawk between air horn sounds. Wiz’s set was an even mix between the highly coveted “Kush & Orange Juice” Mixtape and latest full length album, Rolling Papers. 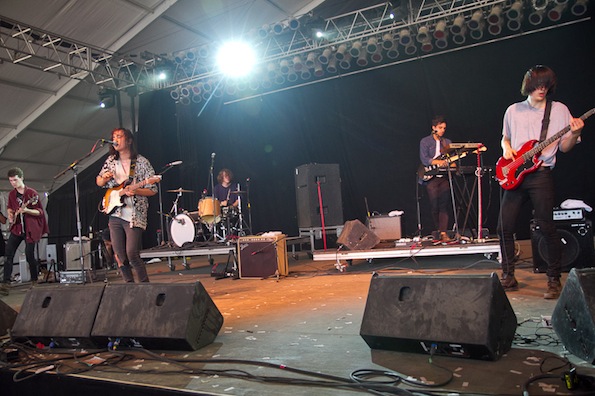 Worth Suffering Through Your Hangover For: Smith Westerns

Playing early Sunday afternoon while most of Bonnaroo were aiding their hangovers and trying to sleep through the high sun, Smith Westerns pulled out one of the best sets of the entire festival. Performing tracks from their buzzy Dye it Blonde and their self titled debut, the band impressed most with their ability to play a set that was true, if not better, than their recordings all while maintaining a docile attitude with a dash of grittiness.

Wish You Were Here: Drake

“I will KILL MYSELF if drake comes out right now,” exclaimed a girl who supposedly had a tattoo dedicated to the Toronto-native rapper in a discrete location. During Lil Wayne and Eminem’s set the crowd was filled with “where’s Drake” and “I hope Drake comes out” – of course this did not happen. Even when Lil Wayne broke into “Bed Rock” (the lack of Nicki Minaj was less upsetting) and “Miss Me” exclaiming, “How many of ya’ll have love for my man, Drake,” obviously the crowd exploded – only to be met with a disappointing backing audio track. 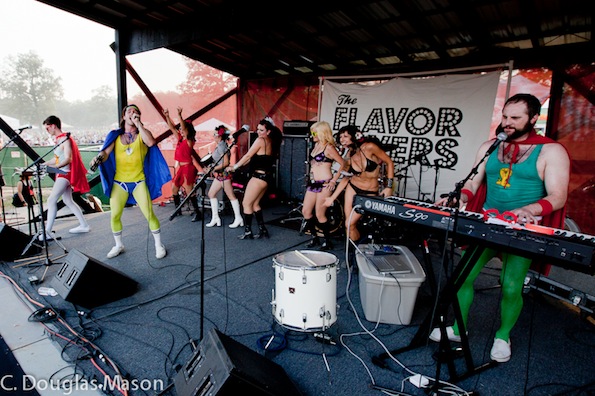 Most Ridiculous Set: The Flavor Savers

With tracks entitled “Dafadildos” and “Mustache Ride,” Chicago’s own sailor hat and neon dizen, The Flavor Savers, are an obvious novelty band – but they do it well. 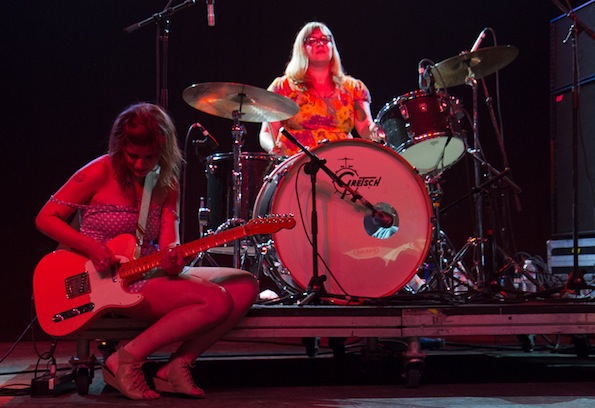 The Band Your Girlfriend Makes You See: Best Coast

Without exaggerating, I saw at least four tank top clad guys being dragged towards the “Other Stage” Friday evening by their squirreled girlfriends to catch Best Coast. It’s always a toss up with the band, whose live set can range from lackluster to more entrancing– their Bonnaroo set was somewhere in the middle. Playing your typical vintage inspired songs from their lovesick mix tape-style album, the band stroke up a few singalongs, but nothing worth sticking around for besides keeping your significant other happy. 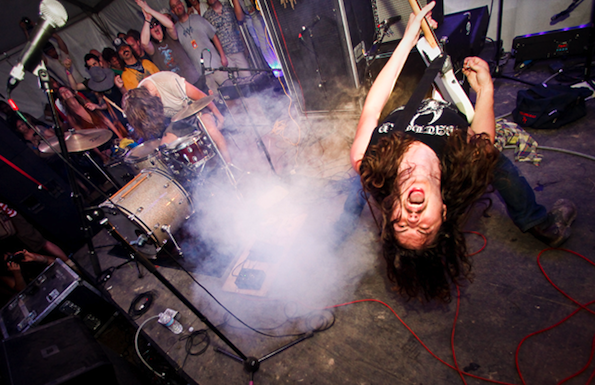 Overlooked, Underrated Should’ve Been on a Stage Not a Tent Set: JEFF The Brotherhood

While making my way into the Miller On Tap Lounge Friday night for JEFF The Brotherhood’s set, I shoved past two drunk guys explaining how “DUDE, these dudes went to my HIGH SCHOOL. I went to HIGH SCHOOL with these DUDES, DUDE.” The Tennessee natives keep the small band vibe, but their turn out of extremely loyal fans packed the tent and performed an explosive set that the small stage could not withstand. Dominating their short lived set with hard hitting drums, abrasive guitars, and simplistic, but thought-out lyricism like no other familial duo could possibly exceed – JEFF The Brotherhood is one of the few bands on the lineup that deserved more attention. 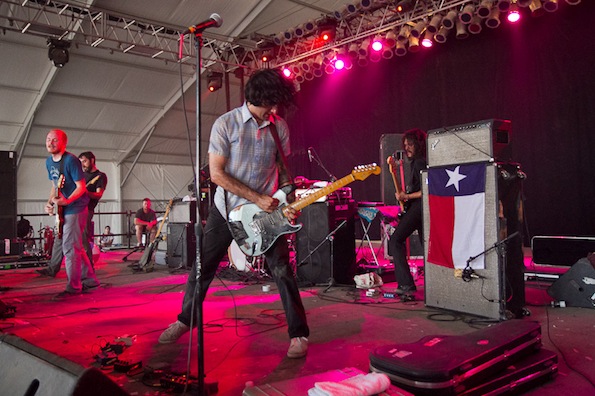 Encore Letdown: Explosions in the Sky

After an hour and a half of nonstop ethereal instrumentation, Explosions in the Sky left the stage only to come back a few moments later to explain that the NBA Finals were on and they were going to go watch it instead of playing an additional song. The upset was forgiven, however, after such an incredibly awe-inspiring set that was missed while other crowds were watching The Strokes and Beirut.