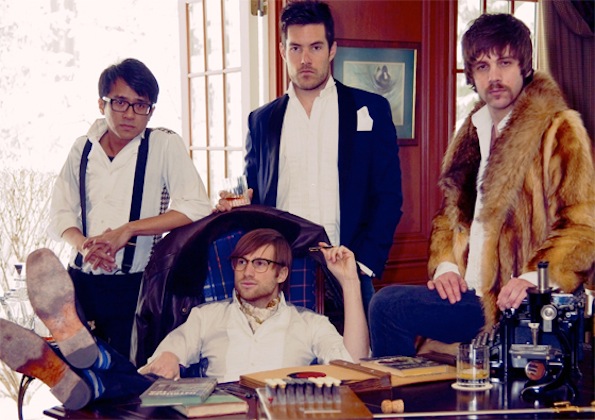 Ladies and gentlemen, the time has finally come: Saint Motel are ready to unleash their debut album upon the masses.

Ambitious and artistic by nature, Saint Motel are Los Angeles’ avant garde, indie pop, and rock darlings. If you’ve ever been to one of their shows then you know this to be a fact: Ain’t no party like a Saint Motel party. Since 2007 AJ Jackson (vocals, guitar), Aaron Sharp (lead guitar), Greg Erwin (drums), and Dak Lerdamornpong (bass) have crafted melodic, crazy, and wildly creative music that has had their fans begging for a full length album. Hallelujah folks, because that album is called Voyeur and it drops on July 10th!

And a proper celebration for such an occasion is the only way to go, so those Saint Motel boys plan to rock the El Rey along with their musical hometown homies Princeton and Chasing Kings. It’s an all-LA thing that has “awesome” written all over it. See these two pairs of tickets that we have? Of course you don’t, just go along with it. Leave a comment telling us why Saint Motel is so badass and a pair of tix to the show could be yours! Our answer: Dak is a straight up bass ninja.