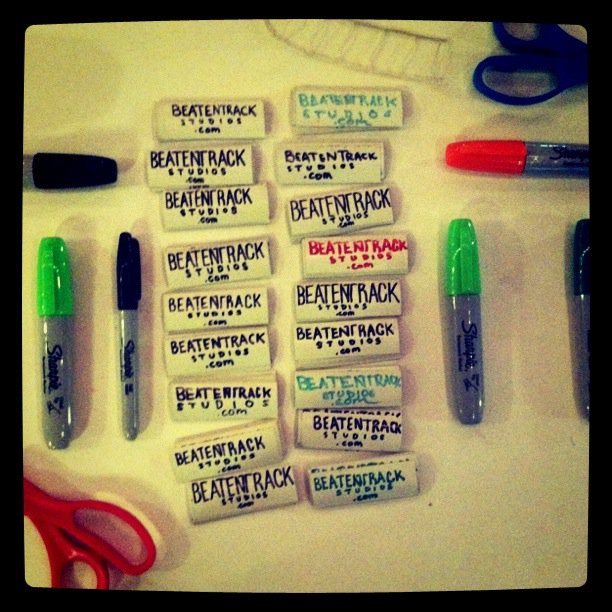 Let’s just get this out of the way right now: during South By Southwest, BEATENTRACK STUDIOS is offering up use of its recording services to artists for free. While this is quite the offer, it is hardly the most interesting thing about BEATENTRACK STUDIOS. Wrapped up within that first sentence there is nothing stated about the core mission of the studio. It speaks not of BEATENTRACK’s dedication to promoting community and music integrity in Austin far beyond just one week in March. It doesn’t touch upon the coalition of people who have come together to make BEATENTRACK a reality nor does it mention how this reality is working to sustain itself. It fails to capture how a studio can promote the idea of accessibility and a leveling of the playing field giving all artists the opportunity to be heard in a way that goes beyond just the recording. It doesn’t relegate the specifics of what makes BEATENTRACK such a intriguing, wonderful and necessary contribution to the Austin (and perhaps far beyond) music scene. It doesn’t even mention the peculiarity of the studio’s physical form, beginning with the fact that it’s on wheels.

Thankfully, BEATENTRACK STUDIOS’ Founder and CEO, Griffin Kelp, kindly offered to talk to The Owl Mag about these things and other particulars; like how the mobile studio came about, how it factors into the importance of community, BEATENTRACK’s relation to Billy Idol, and what Kelp fancies as a soundtrack when he takes the studio out for a spin. 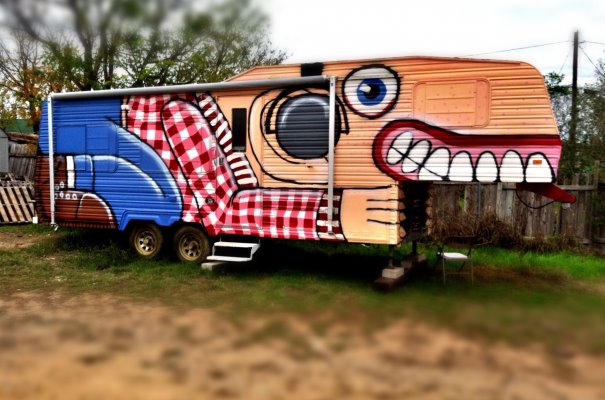 The Owl Mag: First, do you want to start off by telling a little bit about yourself and your relation to BEATENTRACK STUDIOS?

Griffin Kelp: Well, my name is Griffin, and I’m the CEO and Founder of BEATENTRACK STUDIOS. I’m originally from Cincinnati, Ohio, home of Skyline Chili and Montgomery Inn Ribs. If there’s anything I love more than music, it’s food. The mobile food scene in Austin is fascinating to me!

I’m currently finishing my year as an AmeriCorps VISTA volunteering with the Texas Hunger Initiative to establish a cohesive hunger planning body for Travis County’s 158,000+ hungry residents. I hope to place BEATENTRACK as a primary priority this coming year alongside the rest of our team.

The Owl Mag: How did you come up with the idea for the studio? And how did it progress from idea to reality?

Griffin Kelp: I’ve been writing and recording music for over ten years, and have seen the power of music in many communities from Ohio to Texas to Mexico. Last November, I couldn’t fall asleep and my mind began to race with ideas. I grabbed some paper and a pen, wrote everything down, and reviewed my thoughts the following morning. I was working as a 5th grade English teacher at the time, and found myself daydreaming the entire school day. I took Gideon, my pastor, out for a beer (I guess that’s how we roll in Austin) and pitched the idea of launching a community recording studio. He loved it and told me that while Space 12 (the community center our church is housed in) was pretty much booked up space-wise, someone had recently donated a trailer, which would be free to use. That’s where the wheels (literally) starter turning…

He handed me the key three days later and said, “Go for it.” I couldn’t believe my eyes 1) at the glory of what had just happened and 2) at the horror that was the interior of the RV. It’s looked like zombies invaded the 1970’s: dead bugs, opened peanut butter jars, grimy countertops and curtains…it needed a little work. Austin Involved, a group of 40+ professionals came out to help me start the project. To my surprise, Mark Younger-Smith, Billy Idol’s long-time electric guitarist and producer, was one of those volunteers! He helped guide the vision of the project, walking me through the mechanics of creating a professional recording space and pitching the phenomenal idea to take BEATENTRACK on the road to local venues and festivals.

Cincinnati designer and musician Andrew Neyer flew down to re-design the interior of the studio. He designed and installed a custom floor made of re-purposed pallet wood and guided the interior vision of the project. It looks awesome.

And finally, we recently launched the project on Kickstarter. While we’ve been hard at work renovating the studio with our own time and money, we need an additional $25,000 to do the project justice. In the first four days of funding, we’ve raised almost $2,200. We hope the music community near and far contributes to the project, as it will make recording possible to hundreds of local artists who would not otherwise have been able to record. Austin icon Quiet Company has supported the project, stating that they would play a private concert for our largest backers. 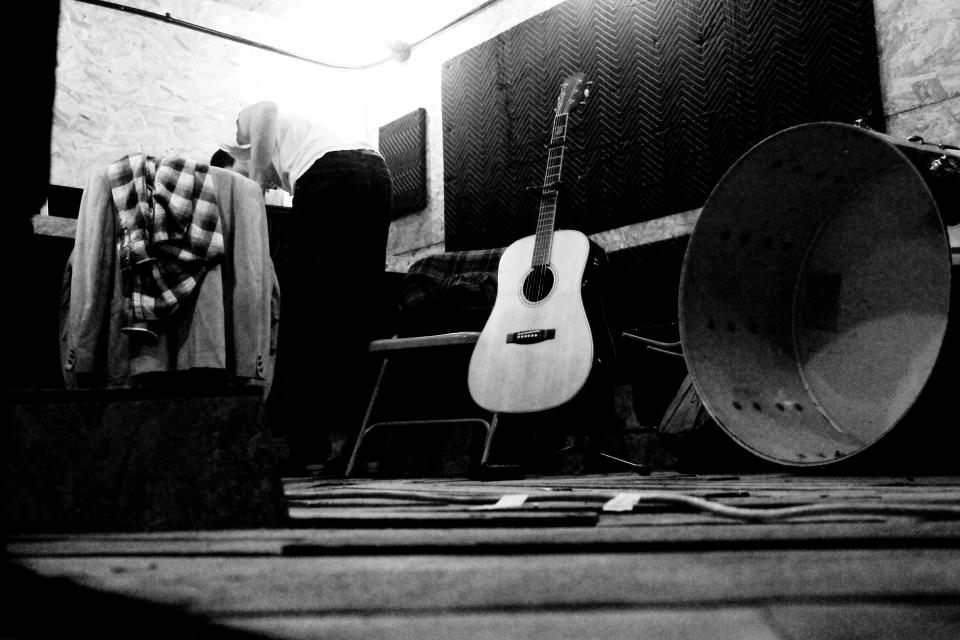 Building and setting up inside the trailer

The Owl Mag: And who came up with the trailer’s artwork? It’s quite striking.

Griffin Kelp: Haha! It is very striking. Mick Santostefano is a local artist and personal friend. He’s a true artist at heart and didn’t even accept an offer of payment for his work! 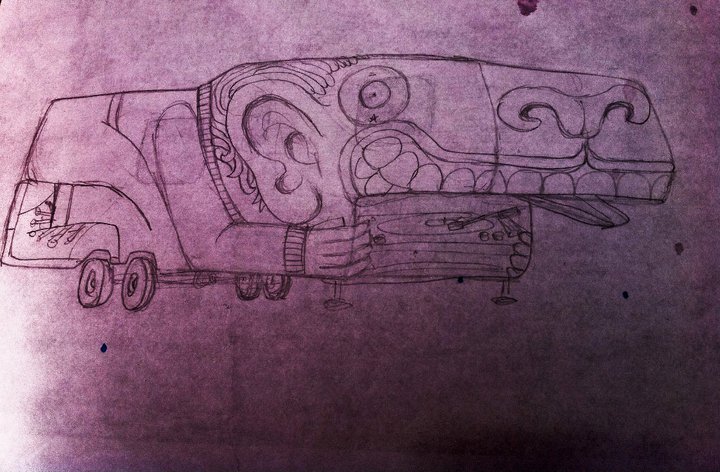 The Owl Mag: So how does BEATENTRACK STUDIOS work?

Our services will be divided into the following two categories:

1) How we’ll bridge a gap in our community: We will provide in-studio recording to the many talented artists in Austin who could not otherwise afford to record in a professional local studio. We will charge artists half the average market cost for hourly recording. This will create a positive, healthy, accessible space for up-and-coming artists to deliver a tangible product to fans. In short, this will allow those who could not otherwise afford to record an album access to professional recording.

2) How we’ll sustain the business: We will provide mobile recording services to musical artists throughout Central Texas. We will park the studio next to clubs, venues, and festivals to record, mix, and master live sets.

The Owl Mag: Recently you started a Kickstarter for BEATENTRACK. Can you talk about this campaign and why it’s important to the studio?

(In addition to my earlier comments): Our Kickstarter campaign will help raise awareness about the project. Austin is a city that prides itself on supporting the arts– particularly in regard to new projects and start-ups. Our project’s vibe fits perfectly with Austin’s trailer business culture. We feel that we’ll be able to have a tremendous impact on our community and be able to sustain the studio through a truly progressive social enterprise. At a foundational level, we think that the average person digging through Kickstarter in search of an intriguing project will be excited about BEATENTRACK.

The Owl Mag: So while the Kickstarter campaign is something that goes toward BEATENTRACK ‘s year-round operations you are doing something special for this year’s SXSW. Care to elaborate on the project and why you chose to do this during the festival?

Griffin Kelp: We will be providing free recording to all SXSW Featured Artists. There are hundreds of featured artists this year, so we will be very busy! As our studio is brand new, we’re excited to work with as many artists as possible. SXSW gives us the unique opportunity to do so in an abbreviated period of time. We love people, we love music, and we want to record music that people love. Doing so for free for a week will be too much fun to pass up.

The Owl Mag: When you imagine the future for BEATENTRACK STUDIOS what does it look like?

Griffin Kelp: I think BEATENTRACK STUDIOS has the potential to be Austin’s premier mobile recording studio. I see it at every major venue and festival in town, from SXSW to Austin City Limits to Fun Fun Fun Fest. I also see it quietly (on the outside, not the inside) nestled behind Space 12, filled with an up and coming hip hop artist, singer- songwriter, folk band, and an audio engineer or two.

Once we have mastered that, I want to take the project on the road for a “musical state representatives” tour. We’d record, mix, and master songs from multiple artists in each state and create a compilation consisting of ALL states in the Continental U.S. It would be a literal studio tour, taking the studio to bands throughout the country. Just an idea…

The Owl Mag: And finally, BEATENTRACK STUDIOS is going to spend at least some time on the road driving from place to place. What will are some must-haves on your travel playlist?

Delta Spirit – History From Below

Quiet Company – We Are All Where We Belong

Jay-Z – The Blueprint 3 & Watch the Throne

My 142-song 1990’s “Decade of Gold” Playlist. (NB: Upon receiving this response here at the Owl Mag, we are now committed to listening to such a playlist in full)

If you’re interested in checking out BEATENTRACK STUDIOS during SXSW, you can look for the strikingly painted trailer or you can follow them at their website, Kickstarter, Facebook or Twitter.  With all these options you can find out not only about BEATENTRACK’s updates, but also learn how to contribute, and contact the studio if you’re an artist interested in recording. The Owl Mag will also be making a stop by the studio during our SXSW extravaganza so be sure check back for that. While you wait, here’s a playlist of some songs pulled off the albums from Griffin’s Born to Ride playlist.