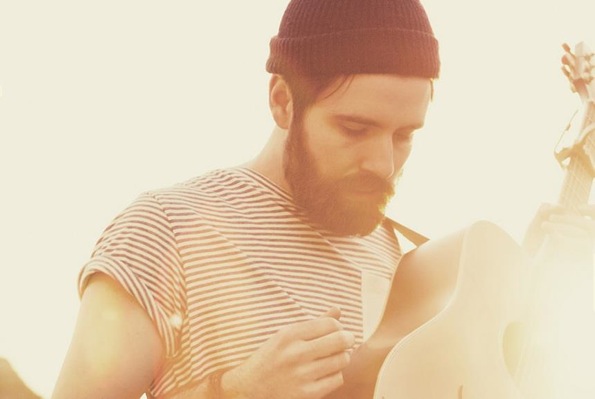 Bryan John Appleby sat in the basement studio of the University of Washington’s student radio station, Rainy Dawg Radio. The same university, in fact, that Appleby attended for one quarter before dropping out to pursue music. He leaned back in a metal chair and ate oatmeal butterscotch cookies which he jokingly said that he had demanded in exchange for his appearance. The show was called Milk and Cookies, but Appleby drank herbal tea.

The station set him up in a concrete hallway, cords running out of the door. He sat next to a bright red fire extinguisher. Over the hour long broadcast, Appleby played five of his songs, for just a few cookies.

A week later, Appleby opened for Damien Jurado at The Neptune. His performance on a large stage was just as honest and vulnerable as when he sat isolated in a concrete hallway, his songs merely highlighted by the orchestration behind him. He stomped his foot continuously during “The Words of the Revelator,” one of his livelier tracks and ended the set with the acoustic “Honey Jars,” an emotion-wrought ballad about an elderly man missing his wife.

A Santa Cruz native, Appleby moved to Seattle five years ago with a band in which he was the drummer. After the band disintegrated he was left feeling uninspired.

“I was the classic disenchanted musician,” he said. “I saw music more as a hobby afterwards. But then I started thinking, what would I make if it was only me?”

The answer to this question is Fire on the Vine, the album he created while being cooped up (thanks to gloomy Seattle weather) with friends in his Ballard house. His home, he said, is filled with the inspiration behind his songwriting: a collection of books, pictures, postcards, and various American artifacts.

Keeping consistent with his Northwest appearance (complete with shaggy facial hair, knit caps, and an array of sweaters) Appleby picks up the folk genre and pushes it further, taking on the role of storyteller with thoughtful and transcendent lyrics full of vivid images of humanity. Fire on the Vine finds a balance between optimism and an honest account of love, religion, and pride. Appleby has quoted his album as being musical ramblings, which is evident from its organic, homegrown sound.

“I’ll look at an old cup or a man and a dog sitting on a sidewalk and let my imagination fill in the gaps,” Appleby said.

Appleby is a part of the close knit local music scene, as is shown through the Ballard neighborhood he resides in, a hot-spot for Seattle musicians. Members from The Head and The Heart sometimes crash with Appleby when they’re in town.

“Everyone seems to want to give everyone the benefit of the doubt and build something up together,” Appleby said.

Appleby, who is now home after a West Coast tour, is taking time to work on new material. He hopes to have 15 songs finished by the end of the year.

His new album, he said, will be more fantastical. “I’d like to sort of make a fantasy world that the album is a soundtrack to,” Appleby said.

Check back next week to see what happens when The Owl sits down with Matt Bishop of Hey Marseilles.