OUT ON A LIMB: Krist and Dave Are Looking For Work 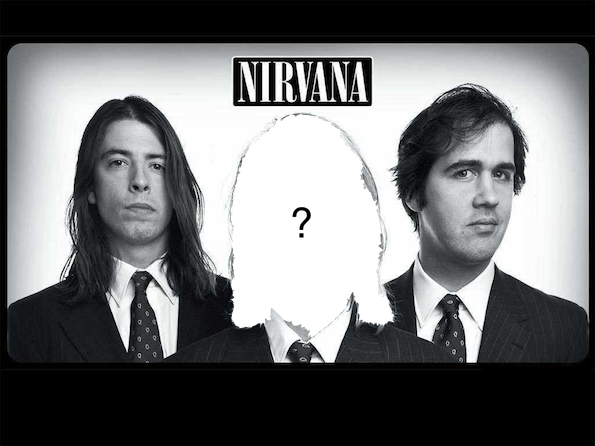 This past December, Nirvana teamed up with The Beatles, and yay, history! Yeah, it was cool seeing Dave Grohl and Krist Novoselic support Paul McCartney, but do Nirvana bring anything to the table besides nostalgic value? Yes.

These days, Grohl is probably best as the singer from the Foo Fighters, but he may just be the best rock drummer of his generation, if not ever. I’ve been fortunate to see a lot of bands with a lot of talented drummers, but Dave Grohl is the only person who’s appeared to have melded with his drum set into some kind of mandrum hybrid monster. I couldn’t tell where the toms ended and the Dave began, and this was at a time when drumming wasn’t even his day job.

Novoselic is one of rock’s great bassists-as-cinematographers, his thick, syrupy basslines always working to add energetic bounce, or a looming sense of darkness. It may not be obvious at first glance, but play close attention and Novoselic’s talent begins to reveal itself. “Polly” goes from campfire sing-along to plaintive anthem the moment he starts playing. Krist’s special touch also becomes shockingly apparent during a scene from the Foos’ 2011 documentary Back and Forth. When Novoselic steps in to provide bass duties for the track “I Should’ve Known,” his seemingly simple riff adds an air of menace that had never appeared in the Foo Fighters’ music before.

Clip from that moment during the recording sessions:

Together, Dave and Krist provide an undeniable rhythmic power. Watch a live clip of Nirvana to see the heavy lifting they provided for Kurt Cobain’s admittedly intermediate guitar playing. “Cut Me Some Slack,” the song they did with McCartney, isn’t much more than a few guitar slides and elementary lyrics, but when Krist and Dave lock in to a taut backbeat, the track doesn’t let up for a second.

As great as Beatles and Nirvana’s first jam was, though, it was never meant to last. Paul doesn’t need them, he’s perfectly happy playing “Hey Jude” for the 10,000th time, and that’s fine, he’s earned it. To let such a classic rhythm section wither away AGAIN feels like a waste, but what project would work well for them next? Is there singularly talented musician who could benefit from their services? There is a man, a certain man, who could be that person, and his name is Jack White.

Admittedly, White and Cobain seem like polar opposites: where Cobain was all heartfelt sincerity worn on a ratty flannel sleeve, White is rock’s candy-colored dandy, adopting eccentric clothes, old timey vocal tics, even a fake name. The man born John Gillis does share some common ground with Kurt, though. During MTV Unplugged in New York, Cobain noted that his “favorite performer” was Lead Belly. Who better embodies the spirit of a ghostly 1930s bluesman than Jack White? Both Cobain and White wanted the creative process to be somewhat uncomfortable, gravitating towards the kinds of cheap department store guitars you’d buy for your kid when you think he’s gonna give up after a month. White and Cobain also took some of rock music’s most basic forms — three chord punk songs, and garage blues, respectively — and mastered them. Cobain had a gift for pop melodies, and lyrics that were abstract enough to interest without being inane. The White Stripes purposely tried to appear innocent and childlike, but White’s heart and soul couldn’t remain hidden for long.

Now would be a good time to do it, too. Grohl’s in a drumming mood, joining RDGLDGRN and re-teaming with Queens of the Stone Age. Novoselic has been laying low for years, but he was game enough to have a “Nirvana Reunion” on live tv. White just released a solo album worthy of our Best of 2012, but he’s averaged about a record per year for the last half decade. In that same time span, White’s also run his own record label and acted in movies. He’s collaborated with rapper Black Milk and the Insane Clown Posse, to name but two. Even touring behind his own record, he alternates each gig between two backing bands, one all-male, the other all-female. I’m not saying that Jack is bored, but he is working hard to keep himself interested.

This supergroup may not ever happen, but if Mr. Jack White were to team up with Dave Grohl and Krist Novoselic, and if it sounded like something between Elephant and In Utero, well, wouldn’t that really be something? Wouldn’t that be aaaaaaaawesoooooome? A fan can dream.