The barn-like loft at the Last Day Saloon is starting to fill up. From the get-go it’s like an awkward scene out of Footloose. People don’t know what to do–they’re a bit timid. They grab seats and drinks. Chitchat ensues and the blood slowly starts to flow.

It’s an eclectic crowd-complete with couples young and old, rowdy singles, stoners and students. Anticipation fills the air; it’s like we’re waiting for a blind date. Miggs (the band) enter from the back of the room, climb the stage, tinker a bit, lock, load, and rock. It catches people off guard. The sound forces them to start moving and they awaken–finally.

Since 2001 Miggs has been pulling audiences out of their slumbers with radio-friendly rock ‘n’ roll. They’ve sold 10,000 CDs (Anyway) from the trunks of their cars and pawned swag like Miggs g-strings and Miggs-stamped LIVESTRONG bracelets (a la Lance Armstrong).

Owl: Did you get your name from the Russian fighter jets in Top Gun?

Miggs: Nope! It’s a nickname I had growing up.

Do you suffer from Insomnia?

It’s why the album got made. I wrote the songs in the late nights and early mornings.

Ever tried on a Miggs thong?

No, but I’ve taken one off…

What is in your Ipod?

You don’t have enough time or space. I have 8,400 songs in it. I have everything from Abba to Zebra. It’s extensive. On trips we hit shuffle for fun.

How do you feel about the Bay Area music scene?

It sort of crashed around us when the dot commers came in, but it’s reviving…just as we’re touring the country, of course.

What is more important-making art or making money?

I do music because I don’t have a choice, but I’m not doing it to be poor. People can argue all day long…art is commerce the second you share it. I just don’t want to be ruled by money to make my art.

What is your greatest rock memory?

Taking my dad to see KISS for their reunion concert was pretty cool; or seeing U2 and going backstage.

I know the Beatles better and love everything about them but the Stones made you feel sexy, too.

How would you describe your music?

It is a mix of the last 40 years of rock/pop music…intimate, yet accessible.

What can we expect from Miggs in 05?

To see a band work their asses off for a chance to work even harder in 2006. We’re shooting for the toppermost of the poppermost, as John Lennon once said. 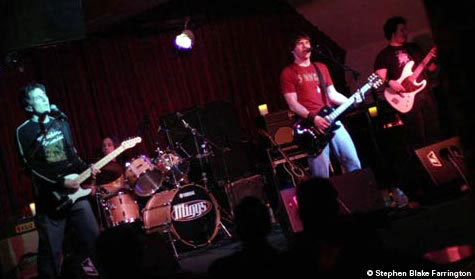