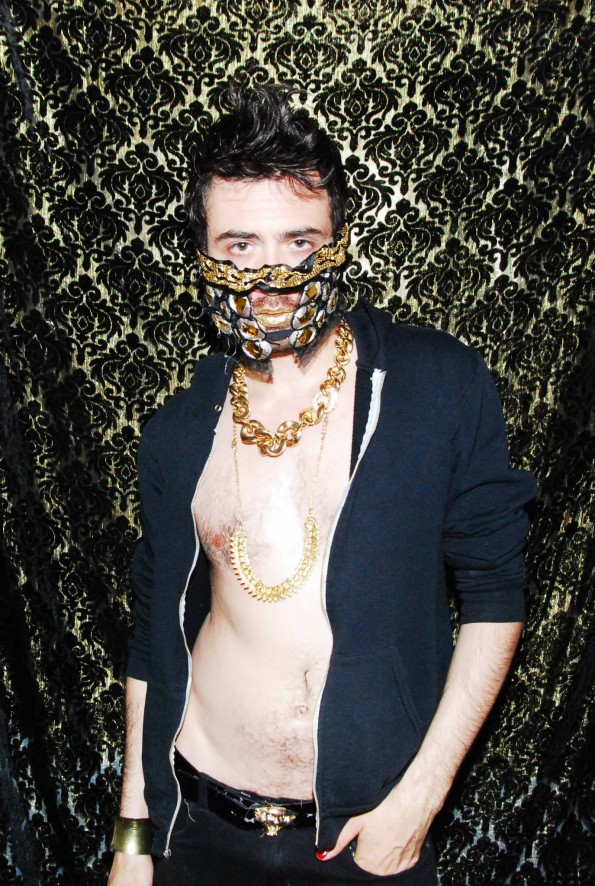 A lone figure, clad in shorts and gold body paint, stands at the urinal of a dance club. In the distance, a falsetto voice calls out. The figure turns around, his face draped with gold jewelry. As the golden man strides past the bar, through the club’s dance floor, a nastily funky R&B groove develops from a live band. The lone figure climbs a catwalk in front of the stage, before facing off with the source of the vocals: fronting the band is some kind of alien love god, face adorned with even gaudier jewelry, body outfitted with garments for which function is an afterthought: lacey blouse, assless pants, thong. So begins another Tickle Torture show.

In his human guise, the alien love god is actually Elliott Kozel, the singer, songwriter, and beatmaker behind the disco funk dance music of Tickle Torture. A few years ago, it would’ve been hard to imagine Kozel fronting a project like this. For most of the early 2000s, Kozel was in Wisconsin-based band Sleeping in the Aviary. A far cry from the unleashed id of Tickle Torture, Sleeping in the Aviary released four albums of endearingly clever alt-rock that celebrated and skewered life at the dawn of the 21st century. Loveless vacations, sad housewives, and the feeling of pining for the cute girl at the grocery store while she was hooking up with someone else were all chronicled in punky, poppy bursts of ear candy. After a few brief tours, the band were poised to hit indie rock stardom. And then they didn’t.

The band dissolved in 2012 and Kozel found himself living in Minnesota and bored with guitar rock. He discovered a love for dance funk through Minneapolis radio station KMOJ. “That was my first time getting into that kind of music, and it was more interesting than rock music. I thought I might try to crack the code of what makes it work.” Living in the hometown of Prince also had an influence on Kozel. “I thought ‘How come no one is carrying on the funk dynasty of Minneapolis?’” Decades earlier, the Twin Cities had produced not just Prince, but an entire scene that would pioneer what would come to be known as The Minneapolis Sound. “I didn’t see anybody trying to carry the torch and so I was like ‘Well, I’ll try my best.’”

That spirit of funky experimentation runs through the music of Tickle Torture. Like Prince, Kozel is not one to copy the dance music of the past, but rather aims to push the genre forward. “There’s bands that are out now that have great songs, but it sounds like they just tried to copy a particular 1980s boogie funk record. I love boogie funk, but at the end of the day you didn’t add anything or change anything. They’re going for a particular style over substance. I can’t do that.” 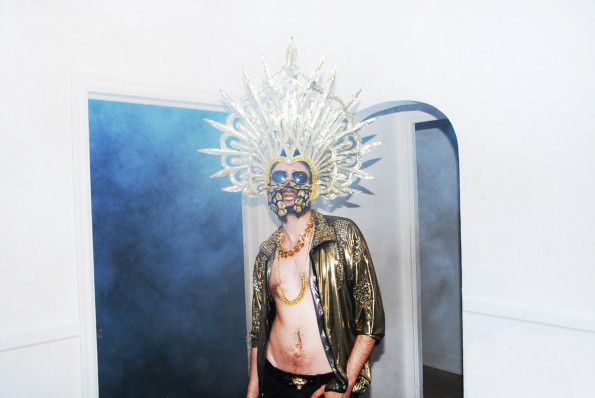 Though the dance funk of Tickle Torture is 180 degrees away from his previous work, the hooks and melodies that Kozel has always had a knack for carry on into the two EPs he’s released under the Tickle Torture name. Kozel has honed his songcraft relentlessly, and his hard work shows through in his brilliantly rendered dance tracks. “When I was young, my friends and I would go to the cemetery and write songs. You’d have an hour, and then you’d meet up and play the song you just wrote. I was super-disciplined and I did it a million times.”

His drive helped him create a loyal following in Minneapolis, especially for his ever crazier live shows. Kozel creates the music for Tickle Torture on his own, but live, he features the support of his band, dancers in various stages of undress, and an army of volunteers, affectionately dubbed Team Tickle, who helped create Tickle Torture’s elaborate sets and costumes. There’s only so much one band can change the world, though, and after a while, Minneapolis still wasn’t returning to its funk roots. “I couldn’t find other artists who were trying to do what I was. Everyone was still in these Replacements-type bands.”

For that reason, among others, Kozel decided to start over again, moving to Los Angeles last September. His band and Team Tickle stayed in Minneapolis, and though uprooting has been tough, he feels that the discomfort that came with it will be a benefit. “It’s a weird feeling, but I feel like putting yourself in a place where you’re struggling and have to prove something again is healthy for your art.”

Kozel is now putting the finishing touches on his debut album, tentatively titled Angel Lust. Like everything about Tickle Torture, the title blends the sexual with the morbid, “angel lust” being the postmortem downstairs bulge that occurs in men who’ve died via hanging or other sudden, violent death. After the non-stop party of the first two EPs, Angel Lust will detail the comedown. “The next album is Tickle Torture gets sad. I initially wanted it to be this space disco party mix record, but the songs weren’t coming out that way. It’s like the after party, because that’s what happened to me. I got a little too into the character, and I was starting to be that guy, giving in to the weird kind of dark, after party drug scene.”

Though it’ll be less hedonistic, the LP won’t exactly be Tickle Torture unplugged. “It won’t be completely different, but it’ll be different. My next step is gonna be trying to class it up a little bit. I’m 31 now. I can’t be that guy forever. I don’t wanna keep having fucked-up relationships. At some point you gotta mature.”

Once the LP is complete, Kozel’s goal is to shop it around to labels and eventually book a national tour where his band can join him. He’s still putting on Tickle Torture shows, albeit on a smaller scale. He’s played shows accompanied by his phone plugged into a PA system, and it was actually one of these gigs which led to his largest show to date, this August’s Eaux Claires Festival.

Kozel was playing a solo set for a festival curated by Totally Gross National Product, the Minneapolis-based record label founded by Polica members Ryan Olson and Drew Christopherson. Eaux Claires Festival founder/ Bon Iver mainman Justin Vernon was in attendance and liked what he saw. “[Vernon] emailed me three days later, and he was very humble and sweet. ‘Hey, I put on this festival called Eaux Claires, and it’d be cool if you could come play it.’ I was like ‘Yeah, everybody knows what that is.’ It was awesome.”

Kozel also has a spot booked at this year’s South by Southwest festival, his first time playing the music industry conference. For SXSW, he’s pulling out all the stops: the full band, dancers, the works. “I’m gonna fly back to Minneapolis and play a show, and then drive down with the band. It’ll be a fun road trip with the boys.”

After more than a decade in the music business, Elliott Kozel has had his share of ups and downs. He’s had to start over more than once, but he’s an artist, and he knows what he was put on this Earth to do. “At this point, I’m definitely still just as driven, if not more driven than ever.” May the odds be ever in his favor.

Tickle torture will be appearing on Wednesday, March 16th at the Iron Bear in Austin for SXSW.