Long Read: That Time I Went To See A Band Play And It Turned Into A Private Performance 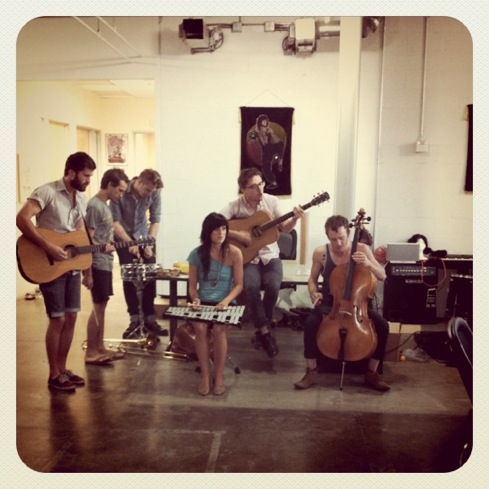 I got to live every music fan’s dream this past Saturday when a band I really love played what could be described as a private show for me…without paying a penny.

It’s a bit of a story, so let me start by introducing you to the Kopecky Family Band. They’re from Nashville, TN, they’re all very attractive, they have three EPs out, and I’d consider
their music full-bodied folk and indie rock. There’s a cello, there are bells, there’s a keyboard, and there are beautiful female and male vocals that dance around one another, blending together in gorgeous crescendos that can take over a room.

I first heard of the Kopekcy Family Band via a strong stamp of approval from NPR’s “All Songs Considered” so when the band swung through San Francisco three weeks ago at Rickshaw Stop, I had to see them for myself. It was one of those gigs where I’ve never really listened to the band and then I spent the next few weeks spinning their tunes nonstop. Needless to say, I became a hooked KFB fan and, as a Twitterholic, I began following them on said social media service.

Early last week, they retweeted: “Calling all San Franciscans – @Hlaska and 1band1brand present @KopeckyFamily this Sat. Oct. 1.” a gig to promote both a band and a brand. Of course, anybody who knows anything about music in San Francisco knew that Hardly Strictly Bluegrass was going down all weekend and anyone who knows anything about me knows that avoiding ridiculously gigantic crowds is my forte. Even if there were 17 bands playing whom I wanted to see, to me, it wasn’t worth taking on the massive audience. Needless to say, I was very much planning to stay far, far away from the festival in Golden Gate Park.

This is all to say that I felt super-lucky when I read @KopeckyFamily’s tweet because with a google search of the store they’d be playing in, I found out that Hlaksa is just three blocks from my house. Decision made: I’d be seeing a fantastic band very close to my home, rather than battling the HSB beast.

Fortunately for me, that behemoth of a free festival caused for a very intimate crowd at the Kopecky Family Band in-store show: Just one dude and his lady friend, my friend, and I, a handful of employees of Hlaska and internet viewers who were streaming the gig online (mostly family, friends, and fiancés of the group). More or less a private show: heck, look at the first picture I snapped on my phone: 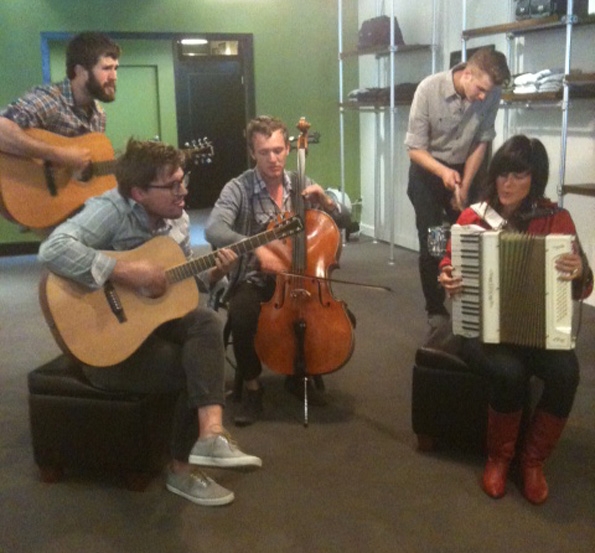 Even better, before the show, I wound up chitchatting with lead singer/keyboardist/accordionist Kelsey Kopecky. She kind of looks like Ashley Simpson, but unlike Simpson, has the voice of a songbird and is exceptionally stylish and yes, I have a giant girl crush on her. She was a delight, and in no time I felt like I was making a new good friend.

I also had the pleasure of meeting the other leader singer/guitarist/trombonist Gabe, who came over and introduced himself. It was my own little meet-and-greet with musicians who should surely be household names in indie. I’m serious. Go Spotify their magnificent EP The Disaster right now!

And then there was music. Glorious music. Even with their bassist noticeably absent and with their horn instruments on break for the afternoon, Kopecky Family Band created acoustics that sounded more than alright for being in a clothing store. After playing three songs, including the single “Birds,” someone realized the live stream had no sound. So as the tech issue was being fixed, Gabe and Kelsey stepped outside the shop onto the sidewalk and played a song for the passersby: 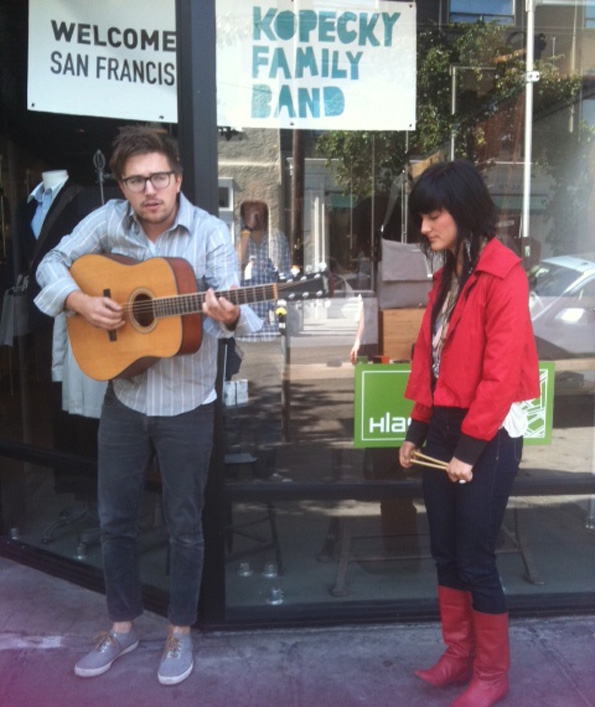 It took less than the time of one tune for the sound to be up and running online and the band was soon back indoors and in place riffing through a half-hour set and even re-doing “Birds” at the request of the online audience –– more specifically a request by June, a name which sent all band members immediately pointing fingers at Gabe, inducing some adorable blushing.

It totally felt like I was hanging out with some cool new friends, but there was still the divide between audience and performer. As their set was coming to a close, the drummer walked off the made-up stage because he thought they were going to play a song with no drum part, my personal favorite, “Disaster.” The rest of the group all replied, “No! we’re playing ‘Angry Eyes.'” My heart sunk and I impulsively said, “No, play ‘Disaster!'” and so they did! They were literally playing for me…and then they played “Angry Eyes.” It was absolutely fantastic!

I spent the afternoon feeling ecstatic about how I got to see what was pretty much a free private concert by a band I have been loving for the last few weeks. To top it off, they are the NICEST. It was by far the most interesting experience I have had with an up-and-coming act and it was all thanks to the Hardly Strictly monstrosity eating the music-going public alive. If you were one of those people present at HSB, but barely getting any music satisfaction, let it be known that there exist other (and dare I say more awesome) music happenings going on around San Francisco.

Maybe next year you’ll be as lucky as me to stumble upon some of it. In the meantime, I urge you to go listen to Kopecky Family Band. They are great and I know that if you’re reading The Owl Mag your taste is superb, so you’ll definitely swoon for them just about as much as moi.

Check out the video for “Birds”: