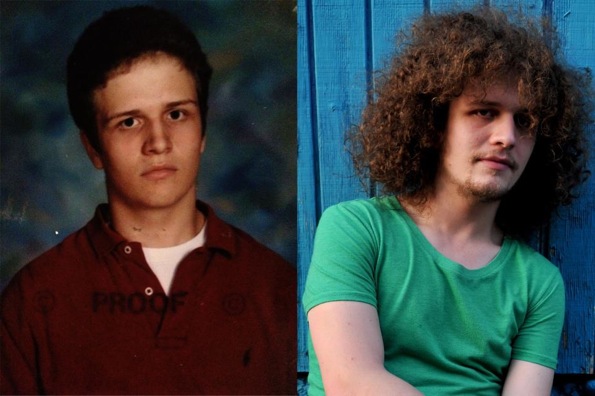 It should come as no surprise that music has long been a passion of mine. Within the first few months of my high school experience, I had met Sleeper Agent band mate Tony Smith and together we started our first rock band. At that time however, my passion was for drumming. This passion influenced a lot of the music I listened to during my formative high school years. I would listen to a lot of music just for the drums.

It may surprise you to learn, however, that I was the furthest thing from being “too cool for school.” I participated in school band and choir. I was an honor roll student and an elected member of Student Government. During my senior year, I was even elected class president, a role that came with mundane responsibilities (like emceeing pep rallies and organizing school functions). To be perfectly honest, I participated in these activities largely due to the typical desire for popularity that exists for many high school kids. That same desire prompted me to be more in touch with Top 40 radio hits during those four years than I’ll likely ever be again.

High school can be a very sheltered place, even when it comes to musical taste. At the time, I didn’t have a reliable method for discovering new music. My insatiable quest for new music didn’t develop until college, so I sat with the same music for a lot longer. Back then, my peers largely influenced my musical identity, in addition to my actual identity, frankly. It wasn’t until college that I truly began to discover new music, and new ways of thinking for myself.

Recounting these events reminds me of a text first presented to me in high school, a parable by Plato entitled “The Allegory of the Cave.” Now that I feel as though I’ve ascended to better listening, it’s hard to look too far down into the cave from which I came. Here are some selections that are closer to the surface, songs I adored in high school that don’t make me cringe too badly today. ~ Scott Gardner

Kanye West – “Touch The Sky”
I listened to a lot more rap back then – a result of being more in touch with popular culture, I suppose – but I still love everything Kanye puts out. This was my favorite song of his during my high school years.

Boys Night Out – “Medicating”
The hardcore/emo scene was king in Bowling Green during my high school years, so I first heard about Boys Night Out from my band mates playing their more guttural Broken Bones & Bloody Kisses EP. The band followed that EP with an insane concept album, Trainwreck, which blended its heavy sound with electro-pop elements. This departure in sound actually disappointed those who first introduced the band to me, but I thought the follow-up material was brilliant. To this day, I hear way more depth in this record than I think anyone gives it credit for.

Immaculate Machine – “Broken Ship”
My brother is a few years older than me, so when I was finishing high school, he was starting college. He came home one semester after seeing this band live and gave me their CD, knowing I would like it because of the energetic drumming. This may be as close as my tastes got to “indie” back then.

Eamon – “My Baby’s Lost”
Ok, this one might make me cringe. Do you remember that ridiculous “Fuck It” song, or have you already blocked it from your memory? That was all the Eamon most people ever needed, but those who ventured to listen to the whole I Don’t Want You Back LP were pleasantly surprised by 15 “ho-wop” gems. Absurd, chauvinistic lyrics set over cheesy R&B production…what’s not to love? Check out this sappy ballad about how heartbreak feels when you discover that your partner is cheating too.

Blink 182 – “Go”
One word: drums. Travis Barker is a controversial figure amongst drummers, probably because he’s an automatic hero to so many young ones. I was no exception to that trend. Although I eventually grew to love a more subtle approach to the kit, I’ve got to give him credit for awing and inspiring me when I was first learning how to play in a band.

Anathallo – “Don’t Kid Yourself, You Need a Physician”
I owe this discovery to playing in a local band and attending local shows. Anathallo came to Bowling Green and played a couple of times in a tiny coffee house on our square due to a friendship with Foxhole, a spectacular Bowling Green based post-rock band. There are Christian themes in Anathallo’s music that never applied to me, but I still had an almost religious experience watching these guys perform their unique chamber-pop indie music to a small Kentucky crowd.

A small-world moment happened to me earlier this year when Sleeper Agent got to tour with Fun., whose very own Andrew Dost I saw play years earlier in that tiny coffee shop, performing with Anathallo.

Brand New – “The Boy who Blocked His Own Shot”
Emotions were way more intense in high school, wouldn’t you say? If I could change one thing about my high school experience, I would have seen how silly it was to worry about romance at that age. But maybe then I wouldn’t have listened to music like this.

Miles Davis – “Blue in Green”
Not your typical high school anthem. I was lucky enough to have a music teacher who stressed the importance of listening to various genres of music for inspiration. Kind of Blue is the number one selling jazz record of all time, so it’s no surprise I started there. This is another track that stuck with me; I play its chord changes every time I sound check.