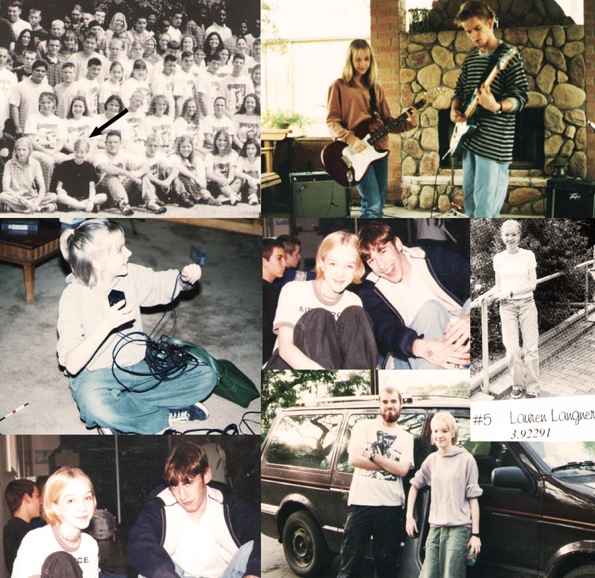 I grew up in the very small Texas town of West Columbia, and I got out of there as fast as I could. This was the town where “kicker butts drive me nuts” shirts were as popular as big hair, bad crafts, and bug bites; I just wanted to escape. The era was the late ’90s — before Ropers somehow became cool again.

The highlights of Columbia High were leaving that place early, becoming involved in a DIY music community, and meeting Eric (who is now bassist of Ume and my husband) at a skatepark at one of my first band’s first shows.

I started playing guitar in Twelve Blades at age 15 with guys from the surrounding towns who put on punk rock shows. This politically-minded youth-run DIY music community was the complete antithesis to the largely redneck cowpokin’ culture I was trying to escape. While the other kids in high school were going to the Armadillo to boot-scoot-boogie, I was hightailing it to Houston to go to concerts and play shows at community centers.

We didn’t find bands through a blog. We would find a handmade flier advertising a concert and we would just go. There was no iTunes; just a kid with a box of records and some zines at a table. Bands like Fugazi were putting on $6 all-ages shows and showing up to their sold-out concerts in a rickety van. I consider myself lucky to have fallen in love with making music with a mindset driven by this sense of community. It’s something we still try to embrace as a band today. ~ Lauren-Larson

Fugazi – Break
One of my all-time favorite bands. There’s a quick shot of Eric and me in the 2nd row whenever Ian MacKaye stops playing to address a guy in the audience!

Unwound – Entertainment
It was at an Unwound show that we decided to form a band that later became Ume.

Los Crudos
This is shot at Jasmine Hall, Lake Jackson, TX where I attended my first concert and got involved in the DIY music community.

Sonic Youth – Becuz
I remember sitting on a bus at age 14 listening to this song over and over on my Walkman. Everyone around me was singing country songs and reading Seventeen magazine, so I just kept turning it up.

Twelve Blades
This is a video of my first band when I was 15. A very young Eric is also in the audience.

Fingerprint – Utopia
I had a homemade tape of this French hardcore band when I first started playing guitar. It helped me learn to play “fast.”

The Cure – Plainsong
I always loved the Cure. This song went beyond angst to anguish. Beautiful.

Nirvana – D7
My freshman year I listened to this song almost every morning on the way to school. It set the mood: “reject reject, towards anti-social, solo solo, standing on the stairs, cold, cold morning… gonna leave this region…” Haha.

Native Nod – Tangled
I had a homemade tape of this song given to me by the bassist of my first band. It sounded different — so dark and very passionate. We played with Chris Leo, the singer years later in Ume.

Descendents – Cheer
Just listen to the lyrics. High school! We mixed our latest record at Bill Stevenson’s (the drummer of the Descendents) studio. I don’t think he realized how much it meant to us to meet him.