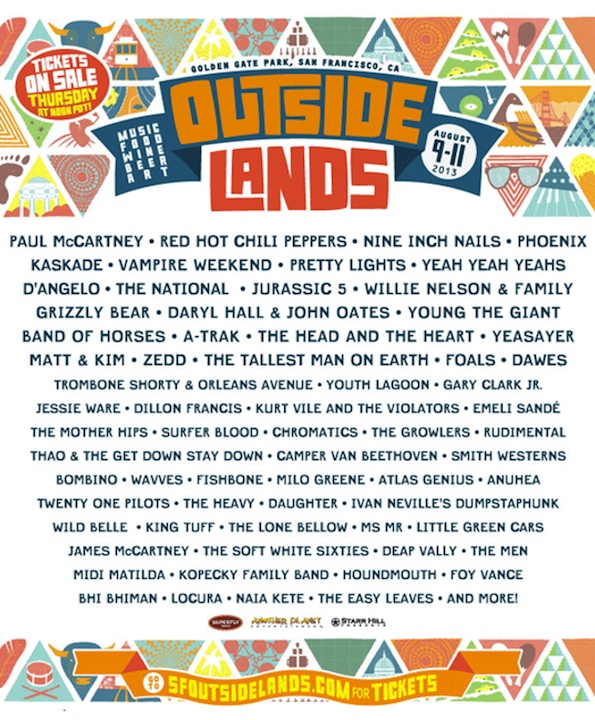 Now, first off…this lineup is super short. Who else are they gonna add? I think the Neighbourhood. They”re on tour with Foals and Surfer Blood and both those groups are on the line-up.

Why are the Red Hot Chili Peppers getting all this festival publicity?!?!?! Are we in some sort of early “90s RHCP festival time warp?!?!?!  Ridiculous!

Daryl Hall & John Oates playing a gig at OSL = hilarious! (My friend, Fuzz, from high school will be super jealous.) The rest of the lineup is lookin” pretty sweet. Cool to see The Soft White Sixties in there as well as some other local bands and definitely excited to see who they add as time passes. That is all.

I”d go just to see Oates” mustache. Bring that thing back! And it doesn”t get better than Golden Gate Park as a backdrop.

THE NATIONAL AND GRIZZLY BEAR. I might need to hop on a plane from Seattle…

I”m going for Fishbone!!!! The 13 year old ska kid that still makes most decisions for me is crazy excited.

Ummm Jurassic 5! Pretty excited for them! But I gotta say, RHCP and Phoenix? I would have thought they”d go for some newer headliners, not ones from OSL past.

Phoenix just played in 2010, no? But as usual, the smaller bands look great. The Heavy, Youth Lagoon and Atlas Genius especially. And not gonna lie, Paul McCartney= yesssss.

Nothing could ever be wrong with Maca.

But Jesus, people- and my Facebook status sums it up- this RHCP stuff is pitiful. That”s just some lazy ass talent buying.

Quit hating on RHCP! They deserve to play anything they want simply because they made Blood Sugar Sex Magik.

I CALLED PAUL MACCARTNEY SO LONG AGO IT”S NOT FUNNY.

Overall: Non-plussed. Big names are solid for those with retro fixations (NIN, J5, D”Angelo). Foals, Yeasayer, and Band of Horses are my medium name highlights. A lot of those main attractions are frankly not my cup of tea.

The small names are an extremely mixed bag. Wavves, Surfer Blood, Wild Belle, and King Tuff are the only ones that stick out for me, and they”ll probably be doing smaller venues around that time anyway. The rest seems very adult contemporary NPR. Must be the Paul factor. I”ll have to see daily lineups before I commit to any of those days.

p.s. I called Wavves too. And why is Fishbone”s name so small?

I know Phoenix and Paul McCartney had some secret meet-up at Coachella, so maybe they”re planning something crazy! They seem to be experts

at that at this point. Agreed about Deerhunter, they need to announce a tour. Really glad to see The National on there.

yeah, Midi Matilda will be fun!

NIN playing and I can”t go because of a wedding. I feel like Nancy Kerrigan after getting attacked at the Olympics.

I”m going to be hopefully shooting a goth/industrial/metal festival in Germany that same weekend.  I know that”s a bit different than OSL but I”m not super impressed with this lineup so that”s actually a huge relief!

I have to say NIN puts on a damn good show. I saw them a few years back in Oakland.

Seeing Yeah Yeah Yeahs tear up the park is going to be pretty awesome too.

The National were incredibly good when I saw them in Pittsburgh about two years ago. Not to mention their new material is amazing and I am pumped for their new album like nothing else.

To me, nothing says summer quite like Grizzly Bear and Vampire Weekend, neither of which I”ve seen before. Gary Clark Jr. is a festival regular, and for good reason. His live recordings far outperform his debut, which was mixed at best.

Anybody care to buy me a plane ticket? Any takers? Bueller?

MaCartney, Hall & Oates, Willie geez it”s going to be like a high school reunion.  And hey I ain”t takin” no shit from all you youngsters! And get off my lawn! And somebody get me a beer.

Bummed I”m missing out on Paul McCartney, NIN, Thao & The Get Down Stay Down, but a little disappointed by the rest of the lineup. Have a great time guys; hello from Portland!

If I go, it”ll be more for the Owl-tastic meet up than any act that”s playing.

It”s a great lineup. McCartney, Willie, NIN, Yeah Yeah Yeahs, Phoenix are on my list. I”m an RHCP hater as well, but that”s because they were dicks to Faith No More. I”m definitely happy. I”m friends with the Soft White Sixties and really glad to see them on board. So much better than Coachella.

Agreed Rich – much better than Coachella!

As someone who”s never seen Paul McCartney live, that alone is going to make this weekend among the best ever. Can. Not. Wait.

When I first saw the lineup I was like – meh – that”s cool. But the more I look at it the more I”m feeling it. I think the crowd this year will be way more diverse than previous years. Personally I”m pretty excited for Grizzly Bear, Band of Horses, and Chromatics. And someone, not me, (read: me) will be baby making after D”Angelo 😉 So stoked to see his return.

Sure will. That man kicks out a hell of a show and his band is ridonkulous!

When he played Coachella, it was the 10th anniversary of Linda”s death and he talked about it being his first tome playing in the desert and how much he knew Linda would”ve loved it out there. Then he sat down at that beautiful grand piano o his and went into “My Love”…holy balls. I swear, even grown men were reduced to fan girls. Optically, things got a little blurry at that point. It was amazing.

The National!!!! Totally called it!

And maybe my cup-half-full disorder has the best of me again but holy balls I think this lineup is AH-MAZING!!!

Last time I checked there”s no shortage of amazing bands from this decade to choose from as headliners. I second the notion of why-the-damn-Your-Mom”s-Dream-Festie lineups lately?! I”m not complaining, don”t get me wrong, but so many amazing bands/artists have been sprouting up, especially the last couple of years; I really wish we could celebrate the youngsters a bit more. Bottom line? Coachella line up FTW. However, OSL gets my A-For-Effort salute.