Funeral For A Friend: The Death of Terrestrial Radio

There was a time when radio was king, when you could turn it on and that steel box or monolithic analog device in your car would tell you who you should like. I remember rain soaked days sitting on the porch listening to some random Disc Jockey tell me that Wham was the hottest thing since Queen or that Thomas Dolby was just weird enough to make it big. They weren’t and he wasn’t, but we followed along anyway, because that’s what the man on the radio told us to do. That doesn’t exist anymore. 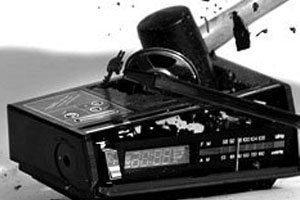 I’m here to emphatically state that terrestrial radio, as a medium to break and influence new music, is dead. Oh sure, there are the random shows here and there like Soundcheck on Live 105 or Morning Becomes Eclectic on NPR that do their best, but who’s listening? With the advent of the internet and blogs on said internet, it has become increasingly difficult for radio to be a viable source of music. It is merely a cacophony of commercials interrupted by the same nonsensical artists over and over again.

When I was the overnight DJ at Live 105, I would often get memo-ed to death reminding me to stick to the playlist. A list I found to be so bereft of anything remotely worthwhile that I’d abandon it without notice. It didn’t make me a rebel or a crusader for good music (though I definitely consider myself that), I was simply bored of playing Foo Fighters, Red Hot Chili Peppers, Sublime, and Wolfmother in succession every night. It ultimately led to my downfall at the station, but that’s a story for a different time (a good one too, Network style). What I took away from that was the realization that radio is now just another conduit for corporations to funnel more money into their already burgeoning coffers.

Maybe it was Satellite Radio, MTV (when they played music) or MP3 Players that delivered the final death knell, but terrestrial radio is more known as a forum for Glenn Beck and Rush Limbaugh to deliver hate filled soliloquies than a place where people go to find out who is up and coming. Disc Jockeys are underpaid and quickly being replaced by Jack FM stations or being forced to prerecord their shows so some board op can go in for $12/hour and babysit the station. Consumers would rather listen to their own mixes; seek out their own music, on their own time than be told what’s good.

A new style of people has emerged from the cluttered, disjointed, fast paced technologically savvy world. We have all become our own DJ’s. We want to break new music to our friends. We want to draw comparisons in our right from old bands whose albums we have on vinyl to new bands’ music we have digitally downloaded. The commercialization of radio is such that people no longer are willing to sit through three commercials then change the station, they merely plug the iPod into the auxiliary connection in their car or put in their ear buds, and like Calgon, they are taken away. As I write this, I’m listening to the Rolling Stones on iTunes instead of having some guy tell me about the latest mattress from Sleep Train in between Kings of Leon and Nirvana songs. Not because I’m too cool for radio (though I am), but because I want to dictate who, what, when, and how I listen to my music. We have taken ownership of the artists we listen to.

I used to go down to the local record shop, buy a five-pack of tapes and make my own mixtapes by trying to catch songs on the radio while trying to avoid the DJ as he attempted to hit the post. It was quite the cat and mouse game I played with my oversized boombox. A game that is no longer necessary. In this digital age it is becoming increasingly obvious that radio is going the way of the dinosaur and radio DJ’s right along with it.

Industries die as technology advances. When Eli Whitney invented the cotton gin it revolutionized that industry, the steel belt turned into the rust belt, and the auto industry crumbled under the weight of its workers outliving their prohibitive cost. The savagery of technology is that it kills things that remind us of a time when we were younger and life seemed simpler. Radio cannot come back from the dead. While we mourn radio and offer our condolences to those that started the industry with the best of intentions, we look to a future where technology will simply beam music into our cranial cavities and MP3 players will too become extinct.