It’s a rare occasion when the stars align perfectly to set the stage for a fortuitous encounter. In our unrelenting efforts to feature the latest and greatest music for your listening pleasure, we at The Owl Mag regularly bring you Freeloader Fridays. On one particular Friday, we featured “Bakery,” a song by Oakland-based singer/songwriter Zoe Boekbinder. While attending a show for another Bay Area-based band the following night, The Owl Mag just-so-happened to coincidentally catch Zoe’s opening set. Boy, are we glad we did. 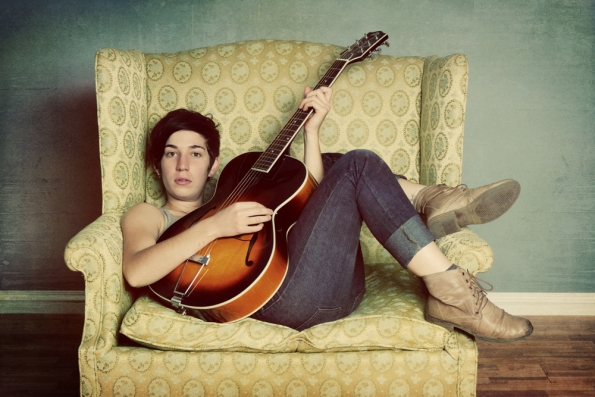 Zoe’s vocals are ethereally beautiful and her songwriting is heartfelt and honest. After mentioning that New Folsom Prison in Northern California is one of her favorite places to play, our interest was piqued and The Owl Mag set out on a mission to learn more about the lovely Zoe Boekbinder.

The Owl Mag: Congratulations on the recent release of your new album Darling Specimens. Can you tell us a little bit about how this album came to fruition?

Zoe Boekbinder: That’s a tough one. How do albums come to be? I am always writing songs and after I have maybe eight songs done I start making a plan. I asked my friend Shenandoah Davis to produce the album because I think she is pretty brilliant. It was fun and it was kind of an insane obstacle course. We hit so many road blocks and had to find detours, and a few times that required some metaphorical off-roading.

The Owl Mag: Is there a particular song on this album that you are especially proud of?

Zoe Boekbinder: A few songs for different reasons. I love how “Don’t Tell Me” and “Salt Water” turned out. I think the beats that Philip Rabalais made really take these songs to a new level of awesome. I love the string parts that Shenandoah wrote for them. The songs that I am the most proud of personally are “Serrated Spoon” because I think lyrically it’s the best song I’ve ever written and “Make A Mess” because Shenandoah didn’t want to include it on the album at first. I had to do some convincing. I got rid of the guitar part and wrote the cascading vocals that are now the backbone of the song. It was really a last-minute development that changed the song for the better.

The Owl Mag: Your songwriting seems so effortless, as if the lyrics just magically appear on paper. Is your actual songwriting process as easy as it comes across on your albums?

Zoe Boekbinder: Hah! I wish! I’m glad it seems that way. In reality, the first part of the song will magically appear. If I’m lucky that will be a whole verse. Usually I think of one or two lines and the rest of the song I wrestle out of the ether. It takes me a few months to finish a song. I used to write songs a lot more quickly. They usually took a few hours. I think that I’ve become a lot more patient and hardworking and my songs are maturing as a result.

The Owl Mag: What five words would you use to best describe yourself or your sound to someone who isn’t familiar with you?

Zoe Boekbinder: Well, I played on KALX in Berkeley recently and the DJ described me as ragtime pop. Three more I would add to that would be: opera, folk, and electro.

The Owl Mag: You’ve been touring quite a bit in anticipation of the release of Darling Specimens and plan to head back out on the road later this month. What have been some of the highlights for you on your most recent tour?

Zoe Boekbinder: I was touring with my friend Mal Blum from New York. She is really fun to be on the road with. My favorite show was one we played outside Nevada City, California. The venue is out in the woods, about twenty minutes out of town. I was raised out there swimming in the Yuba River. That show was really well-attended and we played this outdoor amphitheater (on the same stage my brother walked across when he graduated the 8th grade). Before the show we spent some hours hopping across river rocks and floating on our backs downstream.

The Owl Mag: A lot of the songs your first album Artichoke Perfume and on Darling Specimens have a variety of instrumentation incorporated throughout; lots of strings, some horns, and even a saw. Can we expect to see a large group of musicians backing you on tour?

Zoe Boekbinder: Someday I’ll have a band, I think. For now I’ve really been enjoying playing solo. I think it really challenges me to hold the attention of the audience all on my own. It’s made me a much better performer. I profit just enough on my tours to keep the whole thing rolling. When I can afford it I will add some instrumentalists to the band. I’m really not sure what to add first though…

The Owl Mag: Who are some of your favorite Bay Area bands?

Zoe Boekbinder: Lately I’ve been super in love with tUnEyArDs. Merrill Garbus is so brilliant and such a great vocalist. I really love this new band called Yesway (an offshoot of the band Honeycomb). They do some really great rhythmic vocal harmonies.

The Owl Mag: Are there any particular local artists or bands that you would like to tour or collaborate with?

The Owl Mag: At a young age you seemed to sort of immerse yourself in the creative arts. When was the first time you began realizing you had this urge to express yourself creatively?

Zoe Boekbinder: From as early as I can remember I knew I would be famous one day. I still feel that way… it’ll happen, I just know it. When I was really young I thought it would be for visual art. I wanted to be a painter. Later on I wanted to be a model… not like a fashion model or anything. I just liked posing. Starting when I was around six years old my big sister would dress me up and take pictures of me. I loved it. In high school I discovered theater, musical theater, and then singing. That’s the one that really got its grip on me.

The Owl Mag: Did music play a big role in your upbringing as a child?

Zoe Boekbindre: No one was really musical in the family. We didn’t even really have a big music collection. We listened to The Beatles, the Beach Boys, Simon and Garfunkel, Elton John, Raffi, and the soundtrack to the movie Cocktail (I didn’t see the movie until a few years ago and it’s awful).

The Owl Mag: Do you remember the very first song you ever wrote? What was it about?

Zoe Boekbinder: There are the songs I wrote about stars and baby chickens when I was a toddler, but the first song I wrote on guitar was this angsty political song about the media and advertising. It was pretty awful. Shortly after writing it I got dreadlocks. I have fun laughing at myself for all that.

The Owl Mag: In 2004, you started Vermillion Lies with your sister Kim. In what ways do you feel you have matured as an artist from your early days creating music with your sister to the musician that you are today?

Zoe Boekbinder: My songwriting has come a long way as I’ve begun to think of songwriting as a craft as well as an emotional outlet. I put more care and work into music now than I did then. I also have grown a lot as a performer. Carrying the weight of a show on my own has taught me so much about being present and honest onstage.

The Owl Mag: How did you get involved with performing at New Folsom Prison?

Zoe Boekbinder: It was random: I had always wanted to perform in prisons but I didn’t know how to go about making it happen. One night after a show, this woman who used to do these radio interviews with inmates at New Folsom asked me if I’d like to do it. She got me in touch with a guy names Jim who runs this arts program there. The funding was cut for the arts some years ago but Jim has somehow held onto a position and runs this program with no funding at all. He is a really wonderful and dedicated person.

The Owl Mag: What’s the most common reaction you typically receive from the inmates that you’ve performed for?

Zoe Boekbinder: Some of the best audiences I’ve ever had are at the prison. The inmates are so respectful and appreciative of the music. I’ve never felt too welcome or wanted anywhere so for that reason it’s sort of a selfish project. It feels so good to be there. It’s also incredibly sad when I remember that a lot of the guys I meet will never leave, or if they do leave they will almost surely be back again. The system is not set up for inmates to be able to re-enter society in a sustainable way. It’s such a messed up system. I try to focus on the small picture or I end up feeling really hopeless and powerless. After one of my concerts there was a guy who was sitting in the back and he thanked me for making him feel human. At times like that it’s really hard to keep it together.

The Owl Mag: What has been the most important life lesson you have learned from your experience with the inmates at the prison?

Zoe Boekbinder: It’s hard to pick just one. My experiences at New Folsom have been among the most influential in my life. I think about them every day. It’s incredibly tragic and hopeless and also really inspiring and uplifting. The situation itself is completely unfair and unjust. The kinds of dehumanizing torture these men endure is unimaginable to most of us on the outside. The fact that so many of them are still creating art and forming meaningful friendships and surviving that place is so inspiring.