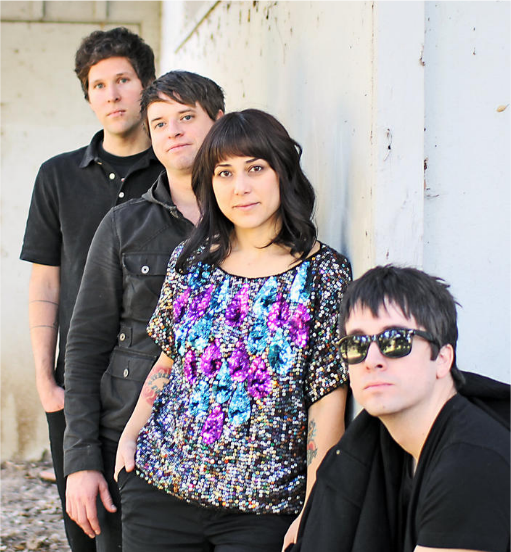 For SoCal electro-pop-tacular band Tic Tic Boom! so far 2011 has been boombastick indeed! They’re getting some hype on KROQ’s Locals Only, they attended their first ever SXSW and have a new 7″ coming out this summer. Tic Tic Boom! masterminds, Mike and Leilani, chatted with The Owl Mag about the LA music scene, Twitter (somebody may need a 12-step) and margarita time!

The Owl Mag: How would you describe your sound to people who’ve never heard it before?

Tic Tic Boom!: We like to describe ourselves as Indie Synth Pop. We like to incorporate pop structures into our music while maintaining an indie sensibility. Our music is a mix of organic instrumentation layered with a heavy electronic influence.

The Owl Mag: Who are the creative forces behind Tic Tic Boom! and what is the song-writing process like?

Tic Tic Boom!: Mike and Leilani are the heart and soul of Tic Tic Boom! The writing process may vary from song to song, but the lyrics, melody and keyboard parts are generally written by Leilani. Mike, being a jack of all trades as well as a recording engineer, comes in and fills in the rest, bringing the song to life. They work together to produce the overall soundscape of each work.

The Owl Mag: What was the last show you attended other than your own?

The Owl Mag: What is the most exciting thing that has happened to Tic Tic Boom!?

Tic Tic Boom!: We’re excited to have made it to and from Austin in one piece. It was really cool to attend our first SXSW. We’re also jazzed to have had Reasons & Rhymes recently added to over 90 college radio stations as well as getting a couple of spins on KROQ’s Locals Only.

Seriously, we plan to have a full length album released by the end of next year and be touring to support that. In five years, more of the same, we’d like to be a couple of full-lengths in and stay relevant. In ten years, who knows where any of us will be. We plan on making music and being happy doing it for as long as people will let us.

The Owl Mag: How do you prepare for a show?

The Owl Mag: Who are your favorite local LA bands?

Tic Tic Boom!: Odd Modern and Moving Picture Show are bands we have had a great time playing with and getting to know. It’s been cool to watch Foster the People grow from nobodies playing the Viper Room to playing Coachella. We also dig The Robotanists, Twilight Sleep, Letting Up Despite Great Faults, and Hands to name a few more.

The Owl Mag: You have released a few EPs now, is their a full-length anywhere in the future?

Tic Tic Boom!: We’ll be releasing a 7inch within the next two months. After that, we are definitely planning on releasing a full-length.

The Owl Mag: Do you have any musical guilty pleasures?

Tic Tic Boom!: Mike likes to listen to Power 106, which Leilani doesn’t like at all. Mike is
also a big fan of 90’s hip-hop. Leilani is a sucker for a good musical.

The Owl Mag: What kind of music did you listen to growing up?

Tic Tic Boom!: Mike grew up loving Led Zepplin and Rush. Being in Seattle he was definitely influenced by Soundgarden and Pearl Jam and loved Rage Against the Machine and Deftones.

Tic Tic Boom!: Leilani listened to The Beatles, The Smiths, The Cure and Depeche Mode. The first CD she remembers buying was Oingo Boingo’s Boi-ngo.

Tic Tic Boom!: Mike is a tweet-aholic. He is a tweeting fool. Mike loves Twitter. Leilani prefers Facebook. We realize how important both are in keeping fans and friends informed. It’s awesome to have the ability to interact with people all over the world.